The Science of Course Ratings 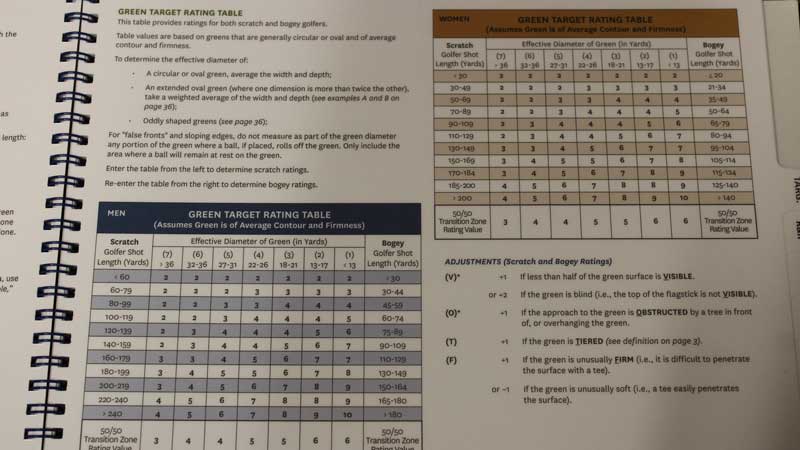 Golfers see numbers for course rating and slope at every golf course they visit. Oftentimes, during a golfer’s first visit at a golf course, they will refer to those items along with the total yardage to decide where to play from. If the slope is 150, the player knows they are in for a stern test. If they see a course rating of 68.0, the golfer probably feels encouraged they can go low. But what do these numbers mean exactly? Where do they come from?

Let’s start with the basics and define what exactly each number measures. (Definitions are provided by the USGA)

Course Rating: “The evaluation of the playing difficulty of a course for scratch golfers under normal course and weather conditions. It is expressed as the number of strokes taken to one decimal place (72.5) and is based on yardage and other obstacles to the extent that they affect the scoring difficulty of the scratch golfer.”

In its simplest terms, the larger the number, the harder the golf course. For example, TPC Sawgrass in Florida carries a course rating of 76.4 from its longest tee for male players. This is understandable since the course hosts events that challenge the world’s greatest players. On the other end of the spectrum, a course suited for players just beginning to play, such as one in Ohio that has a course rating of 69.2 for males from its back tee. Women playing the same tee at this facility have a course rating of 75.9, which again makes sense since the longer distance would make it more challenging to get around.

Slope: “The mark that indicates the measurement of the relative playing difficulty of a course for players who are not scratch golfers, compared to scratch golfers.  It is computed from the difference between the Bogey Rating and the USGA Course Rating times a constant factor and is expressed as a whole number from 55 to 155.”

Using TPC Sawgrass and this facility in Ohio as examples once again, one would find a slope of 155 from the back tee at TPC Sawgrass, which is nearly as difficult as you can find anywhere in the country. But since slope is computed for those that are not playing at a scratch level, a high handicap player would be ill-advised to play from such a tee. The Ohio course's longest tee with a slope of 116 is a much more reasonable challenge.

Getting into the process itself, a team of experienced course raters would expect to be on the course for a rating as long as they would if they were playing a round of golf. The process begins on the first tee and proceeds from there in a very precise fashion. The team needs to first understand which of the following golfers play from a given tee. That can be scratch male, scratch female, bogey male golfer, or bogey female golfer. The answer could be all four, but it could also be just one. Once off the tee, the team will go to a various number of “stops” on the hole. A stop is the average distance one of those golfers will hit a shot. The following table depicts how far the team must proceed off the tee before they calculate the variables at a stop.

Let’s say the team is on the first hole of a golf course which measures 400 yards from its back tee, and all four types of golfers are capable of playing from that tee. The team will go 150 yards off the tee to collect information for the female bogey golfer. Once at that spot, they will survey the area from the center of the fairway to garner the following primary information.

Roll: This characteristic depends on whether the landing zone is uphill, downhill or flat. Take a sharply uphill hole such as the 18th at Augusta National Golf Club. The team would most likely deem it a significant uphill slope, which would register as a 3. A downhill hole, on the other hand, like the 10th at Augusta National would receive a -3. Something flat, like the 18th at TPC Sawgrass, would get a 0. 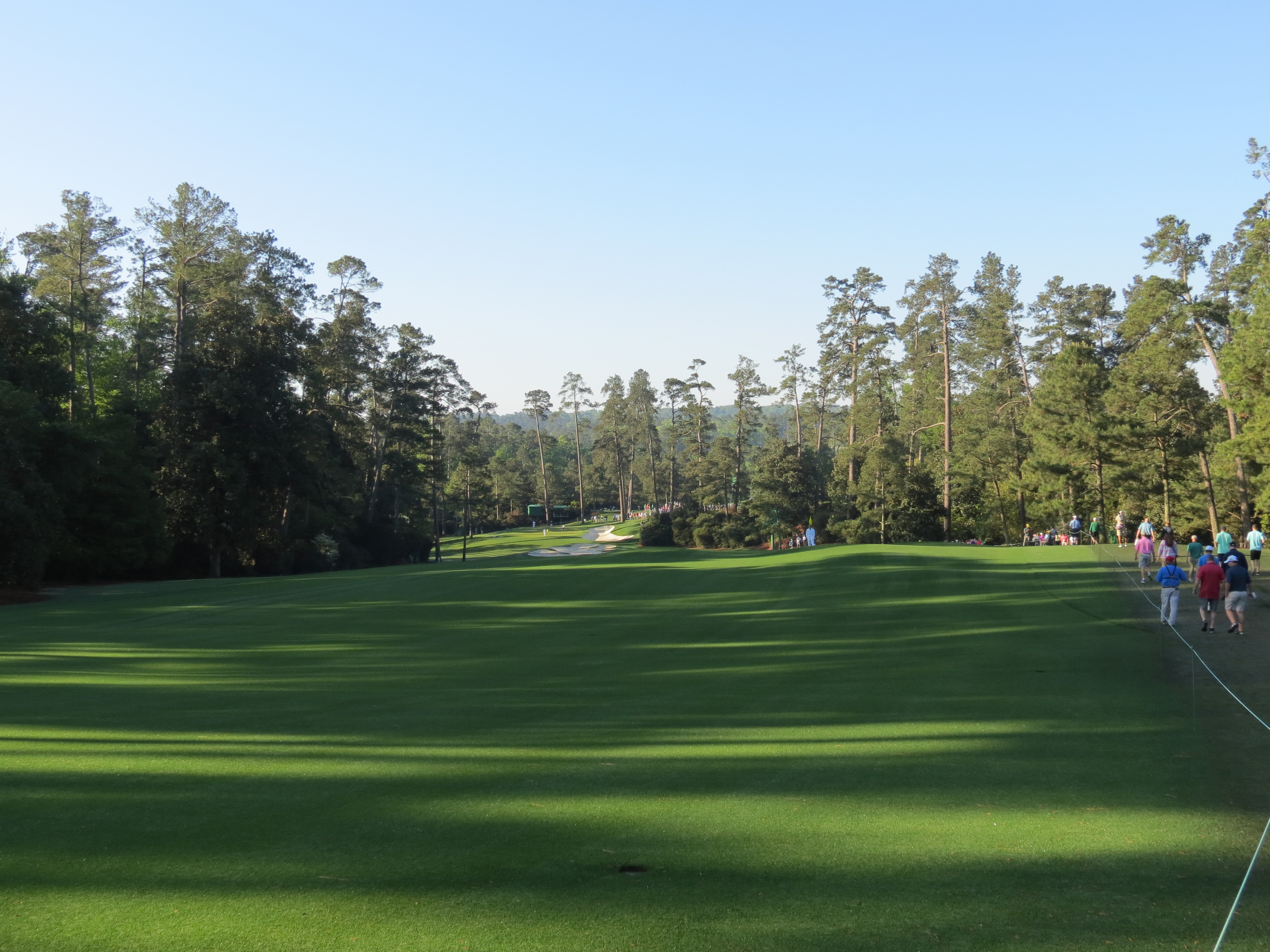 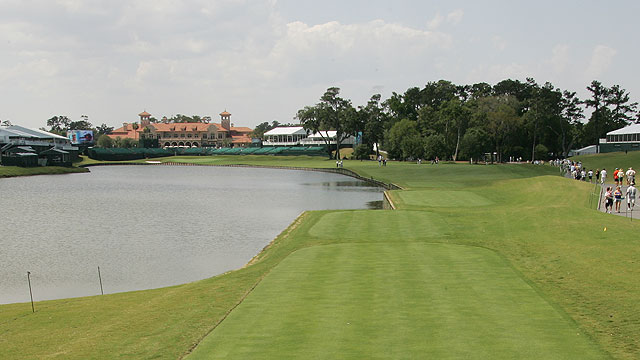 The 10th at Augusta National (left) and the 18th at TPC Sawgrass (right) showcase what would constitute a significant score for roll versus a generous score.

Topography: This branches off the roll characteristic, but the difference is this calculates what the stance is like for the golfer in addition to the elevation change to the target area. A shot from a level stance to a green that is almost exactly even with the approach area would get a low score such as 1. A severely uneven lie, like one a player would get on the 13th at Augusta National, coupled with a staunchly uphill or downhill green would receive a score in the upper single digits like 8 or 9. 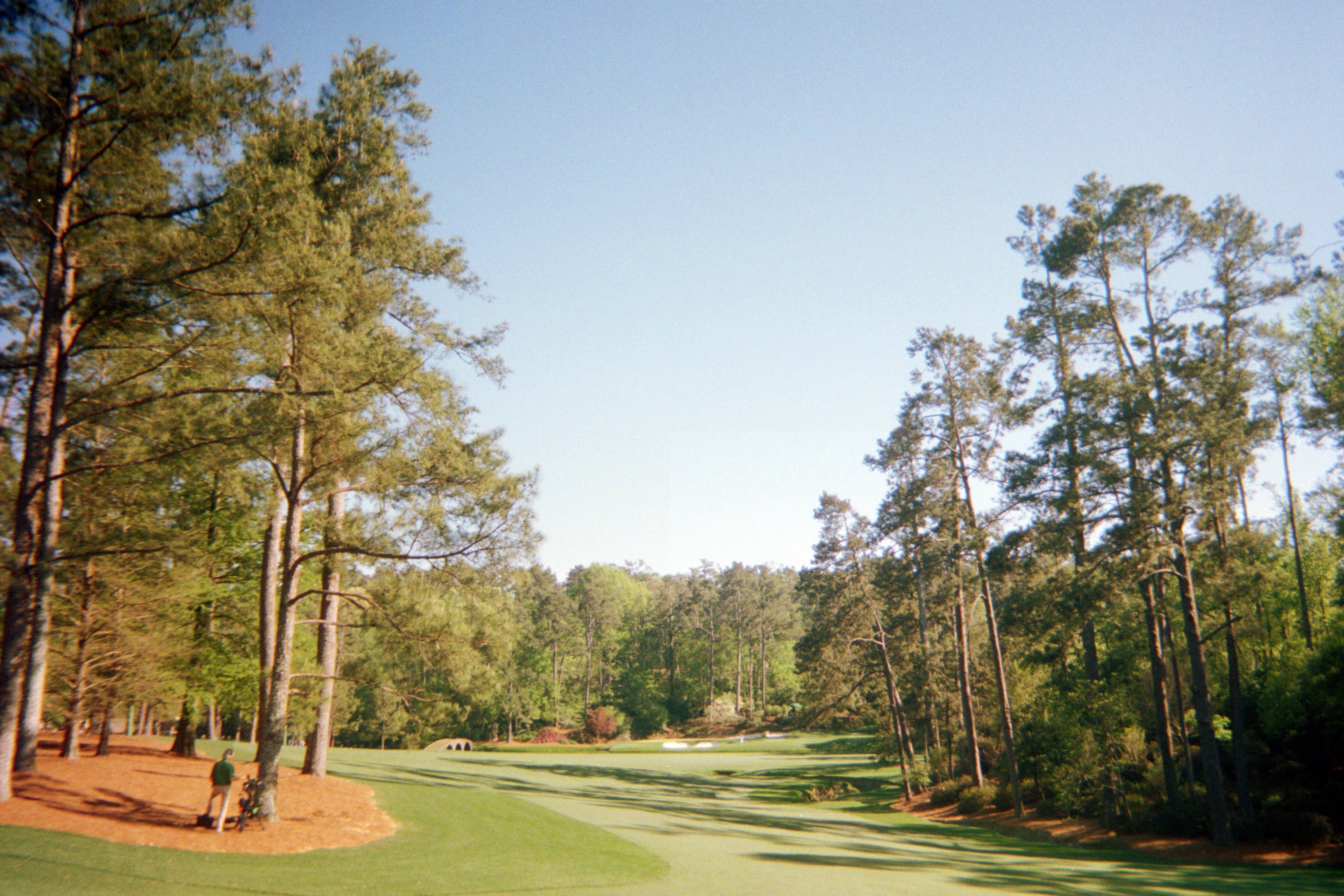 This view of the 13th at Augusta National looking back towards the 12th illustrates the importance of the topography score.

Fairway: A measure that takes into effect the hole’s length and the amount of width the fairway offers. This factor is fairly easy to calculate as short holes with wide fairways equal a low rating, while longer holes with narrow fairways lead to a higher rating. The number can fluctuate based off things such as the fairway being hidden from the view on the tee or slopes that effectively widen or narrow the fairway’s width. 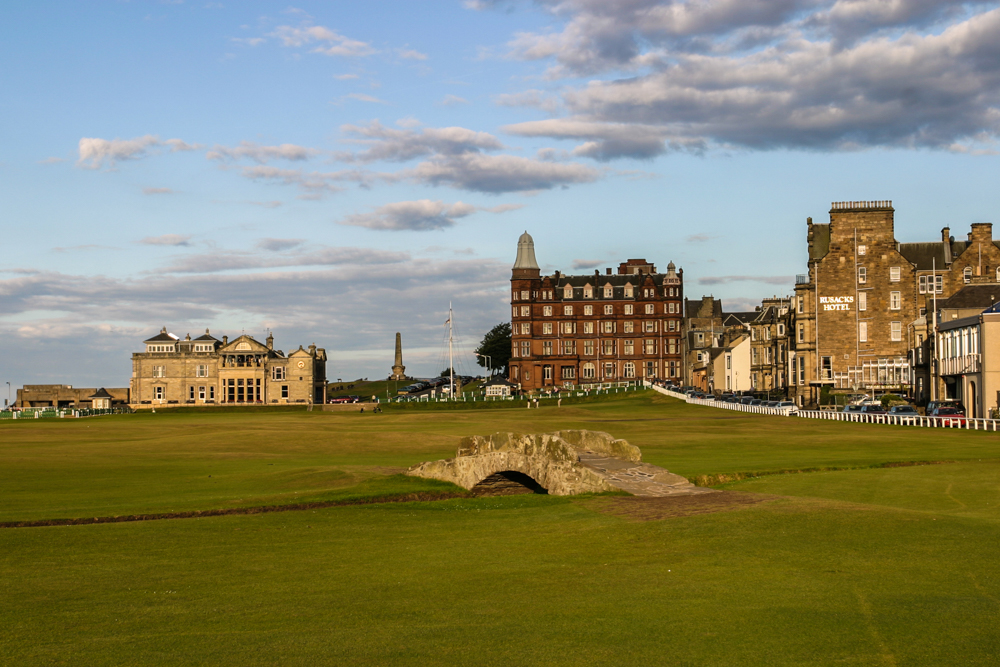 The final hole on the Old Course at St. Andrews would receive the lowest fairway rating possible due to its extreme width.

Green Target: Like fairway, there is a relationship between two elements that lead to this number, which in this case are the green’s diameter and the shot length coming into the green. Big greens that are approached from a short distance, such as less than 100 yards, receive a low score. Greens that are on the shallow side and are usually approached from 160 or more yards yield a higher score. Once again, there are conditions that can change this number. Those can include a blind approach into the green, multiple tiers and the green’s firmness. 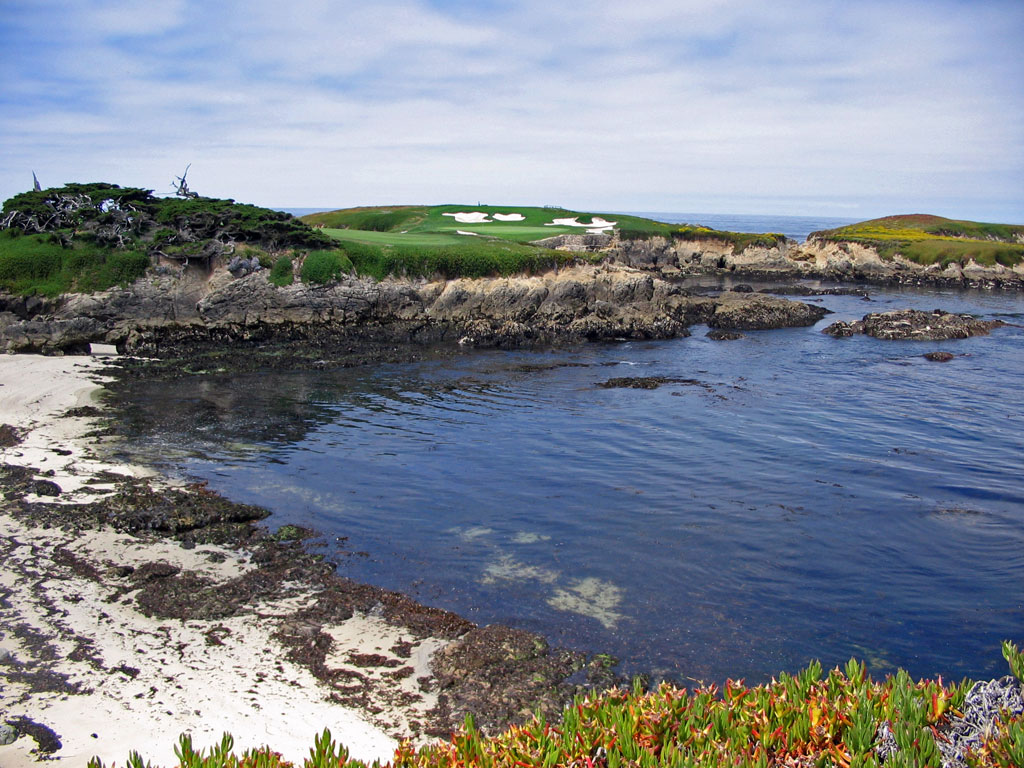 The famous 16th at Cypress Point would receive one of the highest scores possible in the Green Target department.

Recoverability and Rough: This one is all in the name; how easy is it to recover from a bad shot and play out of the rough? Essentially, if a hole offers a fair amount of forgiveness, there will be a low score given by the team. Holes that are penal and offer little chance of salvaging par or better will produce a higher number. 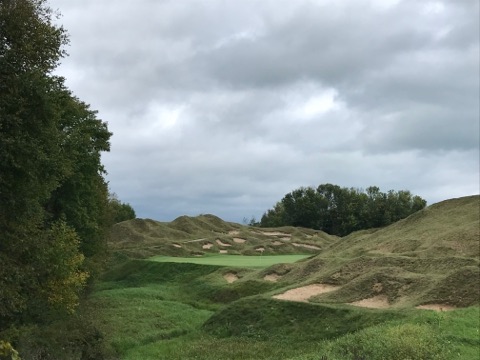 Due to the difficulty of the rough and how hard it would be to get up and down on this hole at Whistling Straits, it would receive a very high mark.

Bunkers: How much can a hole’s bunkers impact a golfer’s score? If you played a links course in Scotland, particularly the Postage Stamp at Royal Troon, the team would record a very high score. In this case, it would not just be a high score because the bunkers are so deep, but also because the green is surrounded by them on all sides.  The fact that the green slopes off from all sides into those bunkers would affect the rating as well. The team also takes note of if a bunker produces a forced carry into the green, or if the bunker has a unique construction feature such as railroad ties or a revetted face. 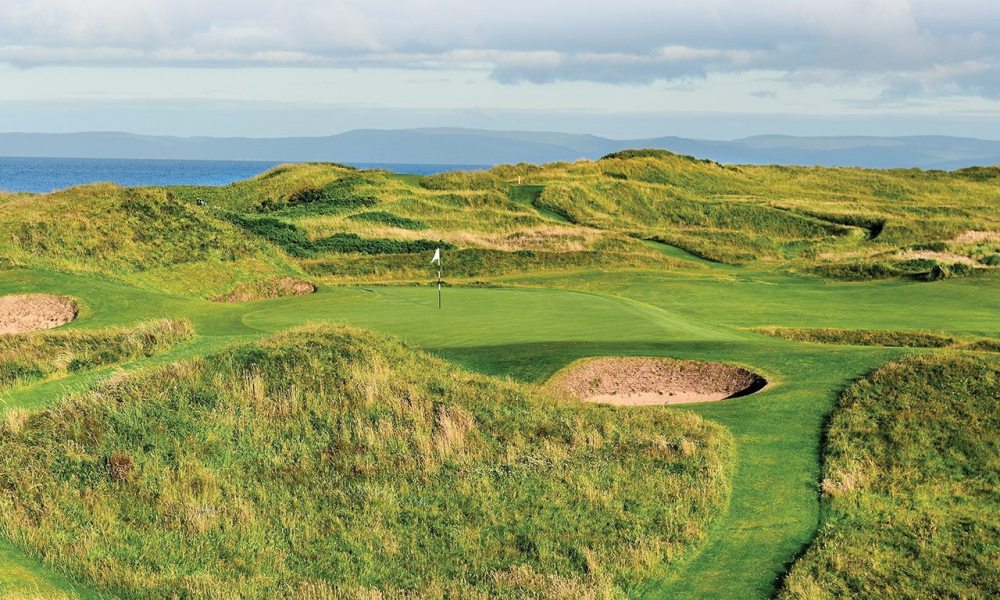 The famous Postage Stamp at Royal Troon demonstrates some of the most severe bunkering in the world.

Water/Out of Bounds: In blunt terms, holes with a plethora of water and/or OB lead to the team dishing out a high score because of the severe penalty those obstacles carry. The items that can determine the exact score, however, are up to the team’s judgement. For instance, they will observe how large the obstacle is. A hole with a creek in between the tee box and fairway does not transfer to a larger score. A hole bordering the ocean from tee to green, however, has a larger score that comes with it. Even in that circumstance, the score can vary because of how closely the water gets to the golfer’s target area. The 18th at Pebble Beach would be one of those that gets a high score. Holes on the Old Course at St. Andrew’s would not receive that same kind of rating because even though the Atlantic Ocean surrounds the course, it never truly comes into play on any hole. Like bunkers, forced carries and the amount of green guarded by water or OB can alter the team’s score for the hole. 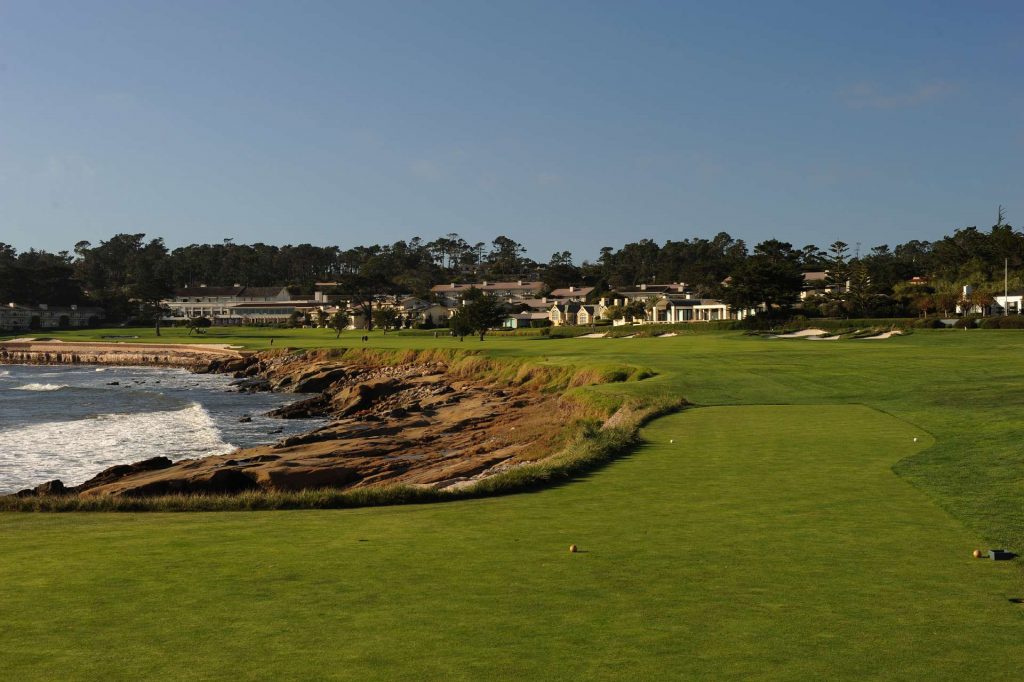 The famous finishing hole at Pebble Beach imposes a high number when a course rating takes place for obvious reasons.

Trees: Do trees severely impact the way in which a golfer plays a hole? Holes with narrow chutes guarded by trees which confirm that question and get a high score. The variables that determine which number the team gives include the height and width of the tree, the number of trees on a hole, the amount of roots at the base of the tree, and the length of shot in which the player must negotiate the trees. 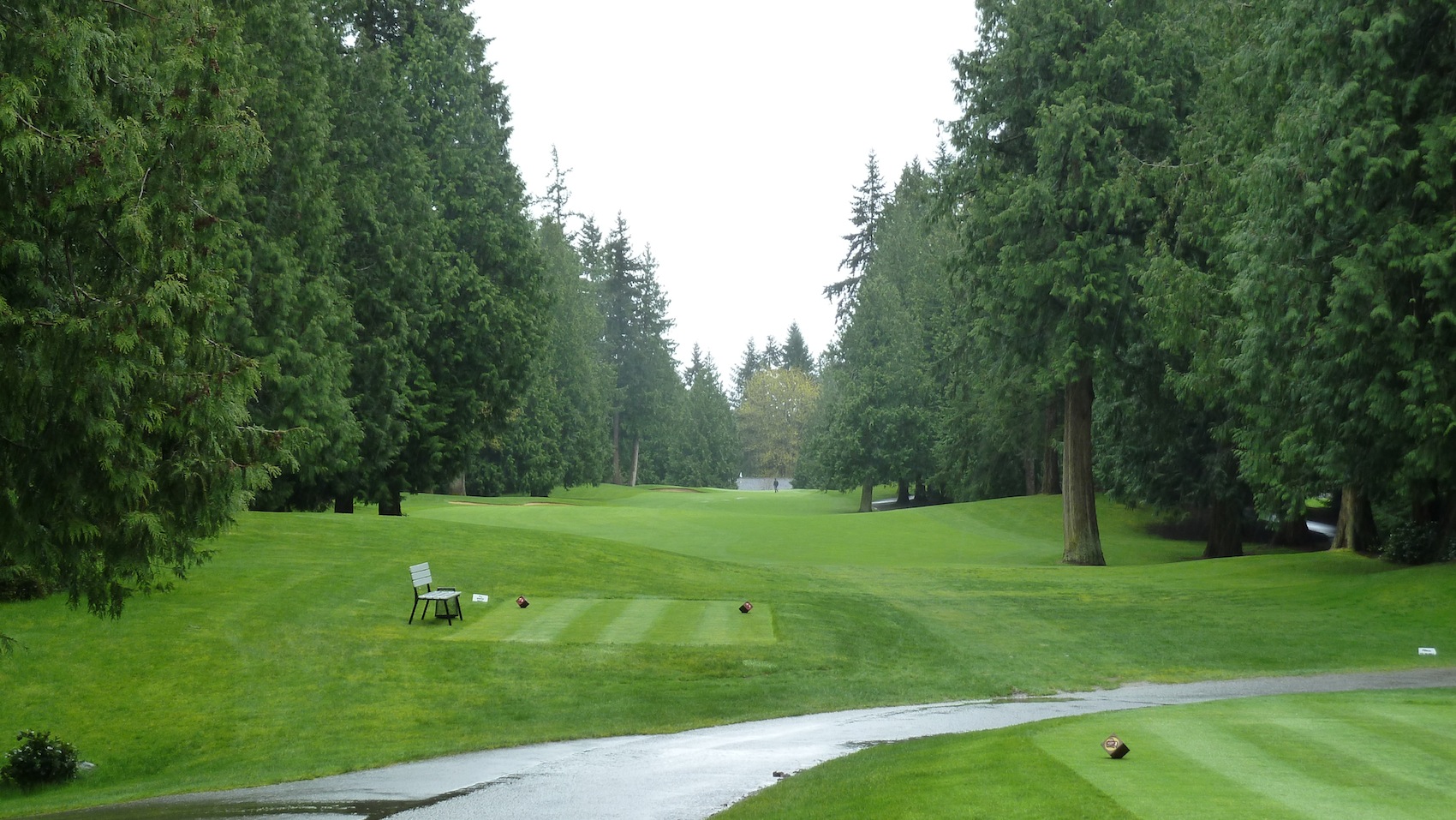 Sahalee Country Club in Seattle is one of the most tree-lined courses in the United States.

Green Surface: Before the team goes on the golf course, they need to know the stimpmeter speed of the greens before beginning the rating. Slow, flat greens that do not require too much thought from the golfer elicit a low rating. Fast, heavily-sloping greens bring about a high score from the team due to their difficulty to navigate. 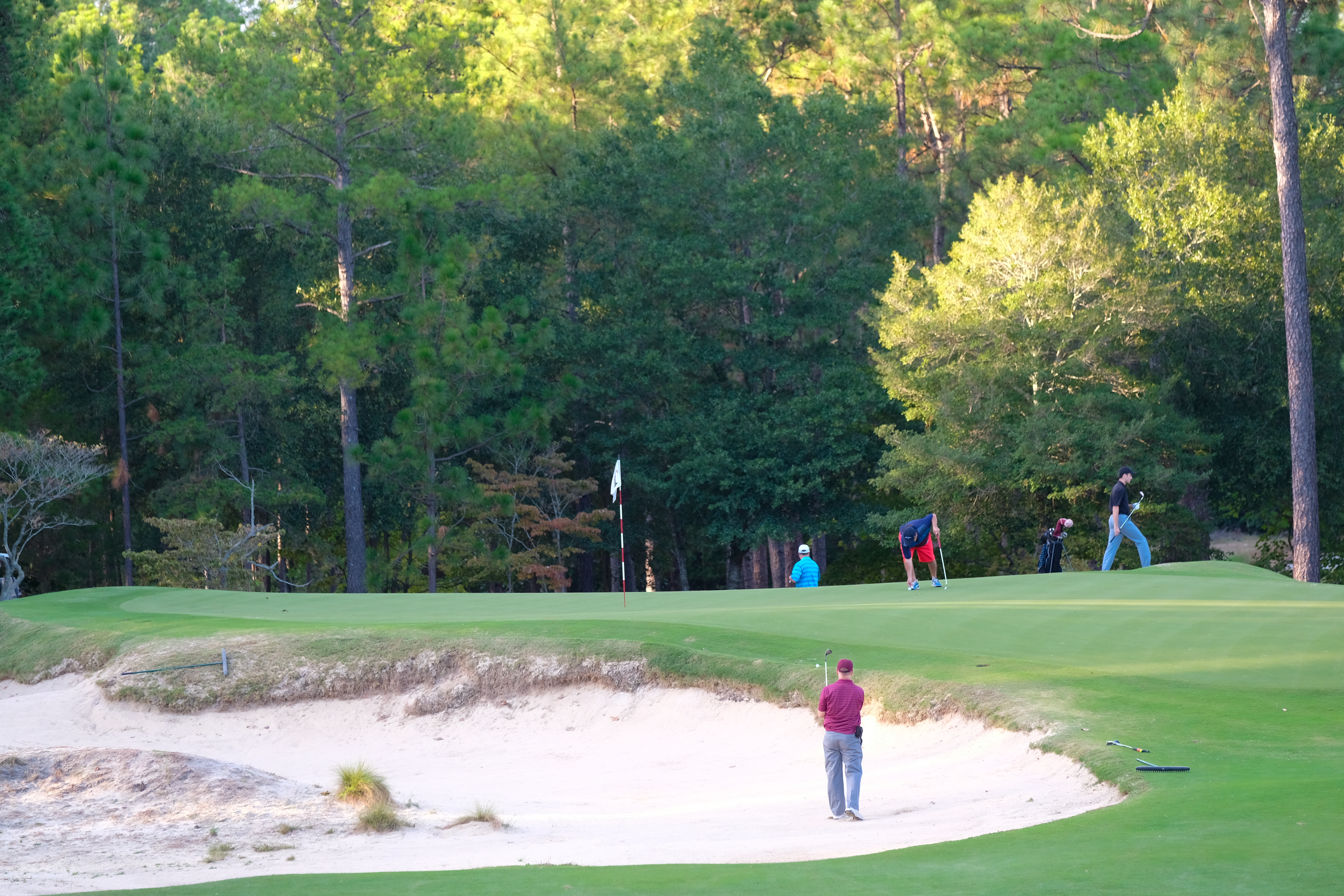 The 9th hole at Pinehurst No. 2 is one of many examples of greens on this layout that produce extremely high marks in Green Surface.

Psychology: The last critical detail that goes into a rating is one that comes after the team has completed its work on the course. From all of the above characteristics, the greater number of high scores the team has recorded means there is an intimidation factor golfers will face during their round at that course. This number is a reflection of that, denoting how much golfers are likely to be influenced mentally by a hole’s challenges.

There are a few other characteristics that a rating team can come across during a round, but those are either extremely rare or do not apply to golf courses in Kentucky. The amount of calculation that goes into finding a golf course’s slope and course rating is much greater than the average golfer probably realizes. A great deal of evaluation and time goes into the numbers a player looks at once or twice during a round before moving on to test themselves against those very factors outlined above.