The Ballad of John Ballard 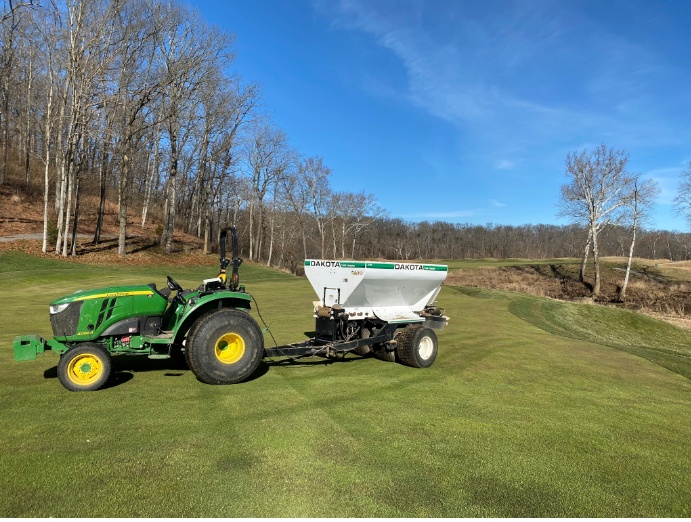 John Ballard starts his workday by waking up at 5:00 in the morning. He showers, has a light breakfast, does a quick check of his email, and then heads to work. His office is one of the most sacred grounds for Kentucky golfers, Valhalla Golf Club. As the club’s superintendent, Ballard is tasked with overseeing the conditioning of the state’s most famous course and the staff who help him get that accomplished.

When he arrives at the site of the 2008 Ryder Cup, the 1996, 2000, 2014 and 2024 PGA Championships, his first task is to send an email to the golf shop with the day’s prominent information. In the email, he includes hole locations, what he and his team will be working on and any other pertinent details golfers might ask about.

“I need the golf shop to be our biggest advocates,” Ballard said. “When people ask what’s going on to the left of the second hole, I need to make sure I equip them with everything they need to know so that when the question comes, they can answer it as if me or someone on my team was answering the question.”

After his communication with the Golf Professionals, Ballard’s communication transitions to his teammates. They get together for a morning meeting and review the game-plan for the day. When they get on the grounds, Ballard and his team are hard at work keeping Valhalla as pristine as possible. He also makes it a point to talk with his coworkers and develop a relationship with them. Know what’s going on in their lives, what they aspire to do and how he can help them out. He eats lunch with his staff each day to continually build those relationships and following an afternoon of doing whatever’s necessary based off the time of year and the season, he heads back home around 5:00 or 6:00 in the evening. These are long days, but this is a labor of love for Ballard.

His introduction to golf came when he was 13. Ballard’s father has been a frequent golfer for much of John’s life, but it wasn’t until his teenage years when John himself first started getting on the golf course. He would be dropped off at a golf course in the summertime by his father while he was heading to work, spend the better part of the day swinging away and get picked up seven or eight hours later when his father was heading home. As the love for the game developed, he believed he wanted to be a golf course architect. So, he enrolled in the University of Tennessee’s architecture program to start that journey, but it did not last long.

“The architecture program there does a really great job at weeding out people who don’t want to be architects. I realized architecture wasn’t actually what I wanted to do, but when I was walking around campus one day I saw a sign for turfgrass management which caught my eye, so I enrolled in the landscape design program.”

In the summer of 1995, Ballard started his first internship which was also his first job on a golf course by heading to Cherokee Country Club in Knoxville. He became infatuated with what he was doing and knew he had found his career path. The desire to work on golf courses took him across the country, starting the next summer when Ballard headed west to intern at The Club at Cordillera just outside of Vail, Colorado. He came back east in the summer of 1997 to intern at the home of American golf, Pinehurst Resort in North Carolina.

Ballard graduated afterwards and began searching for his first full-time job. Through a connection of his father’s, Ballard reached out to Eric Gilliland, PGA who at the time was the Head Golf Professional at Oxmoor Country Club to see if they needed anyone on their grounds crew. Gilliland relayed the info to the club’s superintendent, but they didn’t have any openings. The good news was that Gilliland made contact with Steve Barber at Audubon Country Club, who was in need of an Assistant Superintendent. Ballard started working there and his love for his work continued to grow. After a year and a half of being there, Steve left Audubon to take another position, ironically in Colorado. In came Tom Welch who also held the Head Superintendent job for about a year and a half. When he left, Ballard was offered the job which he took right away in 2001.

During that time at Audubon, more irony came around when Gilliland became the Head Golf Professional there. Now, the same person who Ballard originally called to get in the industry was now a coworker, and the relationship the two developed has meant everything to Ballard.

“Without question, Eric has been one of the most instrumental people in helping me throughout my career. He’s the best Head Professional I’ve ever worked with and I have a tremendous amount of respect for him and other Golf Professionals after years of networking with them. I think that unfortunate, the relationships with a lot of Head Professionals and Superintendents become strained. They provide a ton of value to golf courses and work just as hard if not harder than we do. When you have a great working relationship with them and their assistants, it means so much to everybody’s success.”

For the next fifteen years, Ballard captained the grounds crew at Audubon until Courtney Trimble, the Louisville Cardinals’ Women’s Golf coach at the time, came to Ballard with news that the University had acquired ownership of what was then Cardinal Club. The offer to be the rebranded University of Louisville Golf Club’s Superintendent became his, and it was a job Ballard could not turn down.

The journey at the Simpsonville facility began in 2016 and while it started as the Superintendent, it developed into serving as the Director of Golf managing the entire facility.  But after a couple years on the job, Ballard realized how much he missed being on the golf course. For those who love the game, working at a golf course is a nice perk, but the difference between working at a golf course and working on a golf course was massive for Ballard. It wasn’t long after this when news broke Valhalla’s previous superintendent, Roger Meier, had accepted the Head Superintendent position at PGA Frisco in Texas. That meant the job at Valhalla was coming open and knowing he and his family wouldn’t have to move if he received the job, Ballard put his name in the hat and ended up being selected to assume the role.

While he obviously has the bulk of his concentration on the day-to-day matters at Valhalla, the knowledge that the Girls Junior PGA Championship will be held at the club next year with the PGA Championship just four years away from its latest competition at the facility certainly lingers in his mind.

“The biggest thing for me to get ready for big championships like those is information-gathering. I have to be able to understand our infrastructure, which parts of the golf course have to be treated differently than others and have my systems in place so that everyone is on the same page when those weeks come around.”

While the PGA Championship will be Ballard’s first major championship, he is not a stranger to big tournaments. Last year, he was very involved with the NCAA Men’s Golf regional that came through University of Louisville Golf Club, which Matthew Wolff, Viktor Hovland and other future PGA Tour stars competed in. For Ballard and other superintendents, their work takes on a national focus, but the real grit comes prior to the event.

“We always feel a little bit of extra pressure during those weeks, but the preparation for those events is definitely the hardest part because you have to get everything perfectly ready. Once the week of the tournament is actually there, things actually get a lot easier because at that point it’s just golf. Internally though, we always put a lot of pressure on ourselves. We wear our hearts on our sleeves and want everything to be perfect.”

That sort of mindset began to take on a more focused look last year when Golf Digest published a story detailing the rising depression and suicide rate happening with golf course superintendents. Hidden beneath many superintendents’ stoic attitudes, the amount of stress and lack of self-confidence many of these men and women face started to be shared with the rest of the world. While Ballard himself has never been depressed to such a level before, he certainly understood how it could happen.

“My first reaction when I read about it was empathy. I’ve never felt any of those feelings really deep before, but when you get into tough times, this job can really wear you out mentally and physically. You almost feel like your existence is tied to the grass’ existence. I had a couple tough summers at Audubon where we weren’t getting much rain and the golf course was really showing it. Getting through times like those where there’s not much you can do gets exhausting. Depression is certainly a real thing and I’m glad people started talking about it because I completely understand.”

Ultimately, Ballard and other superintendents are always at the mercy of mother nature, which Ballard said was his worst nightmare and ultimately dictates everything. The way he and his team are working on Valhalla right now could be completely different this time next year depending on what the weather does. Regardless of the weather and type of facility any superintendent is at though, the thing with the most impact is “the almighty dollar.”

“At Valhalla, we have the full package so fortunately we are able to have things at the highest level all the way from the first tee to the gate people drive in at. Being able to have that much of an impact is what keeps me motivated. Your mindset never changes though whether you work at Valhalla or a daily-fee public golf course; you want your work to be at the highest level. You just have to be careful with your spending and occasionally get creative so you can prioritize what means most to you.”

The lifestyle of a superintendent may not always be easy, but it is one Ballard enjoys day in and day out and would encourage anyone to get involved with. His key pieces of advice to those trying to make their way up the industry would be to consider the climate of the place you live. Being in Kentucky and working at a golf course here is going to differ considerably than taking a new job in Florida. Above all else though, stay in contact with your leaders and mentors. Ballard emphasizes how important it is to communicate with assistants and interns so that he can help them figure out what they want to do with their lives and careers. By communicating with Ballard and learning his keys to success, the sky becomes the limit for those dreaming of being golf course superintendents.