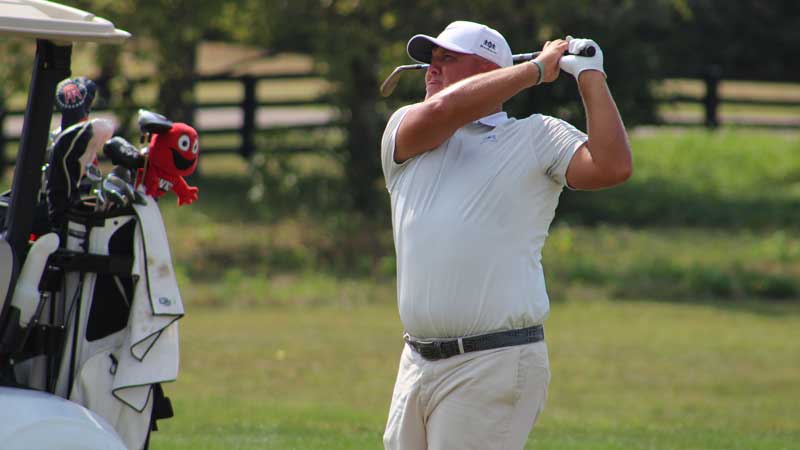 Last June, Nick Johnston was the last man standing after one of the wildest tournaments in recent memory for Kentucky golf. It was an emotional and triumphant accomplishment for the man who had flashed moments of brilliance on the golf course, but becoming a champion of the Clark’s Pump-N-Shop Kentucky Amateur cemented Johnston as one of the Commonwealth’s top players and as a name we should start getting familiar with.

When Johnston was born in 1984, he entered the world with a bloodline built on golf. His father was a golf professional after he finished college while his mother played college golf for the University of Montevallo in Alabama. The two connected in Atlanta where he gave her golf lessons and the rest is history. Johnston was born and raised in Louisville where he played a variety of sports, but golf was naturally the one that emerged as his passion.

In the beginning, it was casual weekend rounds of golf with his dad and his grandparents. That blossomed to playing the Kentucky PGA Junior Tour where the enjoyment of competing formed. Once he started believing he had a knack for golf, Johnston’s passion turned into dedicated improvement via consistent practicing and playing. Johnston went to Western Kentucky University and was a preferred walk-on during his first two years. Then it was a partial scholarship for years three and four with a full scholarship during his final year as a Hilltopper. Once his college career was in the books, it was off to see about becoming a professional golfer.

“I turned pro right away after leaving WKU and started playing various professional tournaments,” Johnston said. “In the winter of 2007-2008 I did some mini tour events and didn’t have much success. I learned a lot more about myself and the game of golf during that time than I made in money.”

After that experiment, Johnston began working at Hurstbourne Country Club in an assistant’s role, but after a couple years of poor play he felt it was time to switch things up. He took a step away from golf and began selling medical equipment, a job that lasted several years through February of 2019. Johnston described the work as “semi-enjoyable,” but it certainly was not where his passion lied. During that same month, Johnston’s father passed away. His dad’s passing coupled with exiting work in medical sales led to Johnston recommitting to golf in 2019. With some money in the bank and more time opened up, the road to competitive golf had resurrected.

“After everything that happened, I decided I was going to get back out there and play some tournaments to see what I had in me. I did some tournaments in the spring and then I go to church one morning and start talking with Phil Armbruster (Honorary President of the Kentucky Golf Association and Kentucky Golf Foundation). We chatted about my dad and how much he meant to Phil since they go way back and somehow we circle around to the State Amateur. He convinced me to sign up for a qualifier and I was a little reluctant at first, but he swayed me into doing it. I played terribly during the qualifier, but fortunately I ended up getting in.”

Johnston was off to Country Club of Paducah in mid-June as a result to give it a go in the 105th playing of the Clark’s Pump-N-Shop Kentucky Amateur. From the week’s outset, Johnston knew there was something different about this event.

“I told my mom before that tournament I had never been in as good of a spot with my golf game mentally as I was that week. I just felt at ease and in control of what I was doing. I had some minor Paducah experiences before that week but had never seen the golf course before. As soon as I started hitting shots I could tell I really enjoyed the layout. It seemed to fit my game perfectly and once the competition got started, I just concentrated on one shot at a time.”

Johnston opened the event with rounds of 70 (-2) and 71 (-1). Heading into the final round, he shared the lead with Evan Davis before a roller-coaster of golf ensued during the closing stretch. As the round progressed, Johnston found himself trailing by three shots as he stood on the 14th tee. Back-to-back birdies along with the Jacob Poore, the leader at the time, making triple bogey on the 16th hole suddenly put Johnston in the driver’s seat. Needing birdie on the par-five 18th to win the tournament outright, Johnston faced a four-foot putt to clinch the title. The ball slid across the edge of the hole and there was more golf for Johnston to play.

“I was nervous before that putt, but I was excited at the same time. One thing I’ve learned throughout the years is you have to enjoy situations like that. They only come along every so often and it’s a fun place to be in. I just hit the putt too hard, but after I walked off the green the first thing I did was find Dave Nicholas (President of the Kentucky Golf Association) and ask him how long until the playoff would start, because I wanted to get right back out there.”

Twenty minutes later, Johnston and Poore were back on the tee box set to commence a sudden-death playoff. Johnston reached the green in two and after narrowly missing his eagle putt, making birdie this time would give him the victory as Poore would make par on the hole. A swirl of emotions overcame Johnston afterwards. Feelings of ecstasy, relief and thoughts about his late father were all on his mind after a monumental victory.

“I’d be hard-pressed to say it’s not my greatest accomplishment. It was such a big moment for me and I was just so excited to pull it off. It gave me a lot of confidence going forward and inspired me to do more competitions later on.”

That brought Johnston to Q-School for the Korn Ferry Tour in the fall. He ultimately fell two strokes shy out of advancing to second stage, but his radar consists of nothing but golf now. Johnston plans on trying to play in a few Monday Qualifiers during 2020, with Kentucky’s Barbasol Championship being on that list. Another shot at Q-School at the end of the year is on his wish-list as well. Golf will be the center of his career, however, regardless of the results of his play on the sport’s biggest stages. Johnston has begun the process of becoming a PGA Professional and is working at Wildwood Country Club as their Director of Player Development. Teaching the game to the club’s members, specifically some of its juniors, will be the concentration for the now PGA Associate.

“Golf really is my passion so I’m excited to get into teaching. I’ve been doing a lot of studying about the golf swing and can’t wait to share my passion and the things I’ve learned with other people. It really is a game you can utilize all your life whether you’re a scratch golfer or a double-digit handicap. Sharing that with people and watching them realize that truly excites me.”

Johnston’s transition from the KGA to the KPGA opens up one of the top positions for the rest of the amateur body in Kentucky. His status as a PGA Associate means he will not be able to defend his title during the 2020 Clark’s Pump-N-Shop Kentucky Amateur at Lexington Country Club, but hopes more amateurs will get involved with KGA tournaments and work their way up the ranks.

“The KGA is a first-class organization. Every tournament is run like it’s the most important golf tournament in the world. You get the feeling from the people working that they truly care about the players and the tournament’s welfare. Last year in Paducah there was that big scoreboard next to the 18th green which was so fun to play next to. That’s what it all boils down to; golf is meant to be fun. Now sure, you get competitive environments and want to win, but anytime there’s a touch like that it’s awesome to experience. People should play as much as they can though. It’s competitive but not cutthroat by any means. The final round of the State Mid-Am at University Club of Kentucky was one of the most enjoyable rounds I’ve ever played. Matt Epperson, Andy Roberts and I were talking about other sports and laughing the entire time while we’re trying to win one of the state’s biggest tournaments. That stuff makes everything so much more rewarding. Regardless of your handicap, you have to get out there and play.”

As Johnston transitions to Section tournaments this year, he is already excited to tee it up in Pro-Pro and Pro-Am events and get a new side of competition he’s yet to experience. Pros and amateurs in Kentucky will have to contend with Johnston during this year’s Kentucky Open at Triple Crown Country Club on July 28-30, which he already has circled on his calendar. His competitive experiences and playing ability are already enough to make him one of Kentucky golf’s best stories, but his learnings being filtered down to up and coming golfers will come to benefit golf in the Commonwealth for a long time coming.