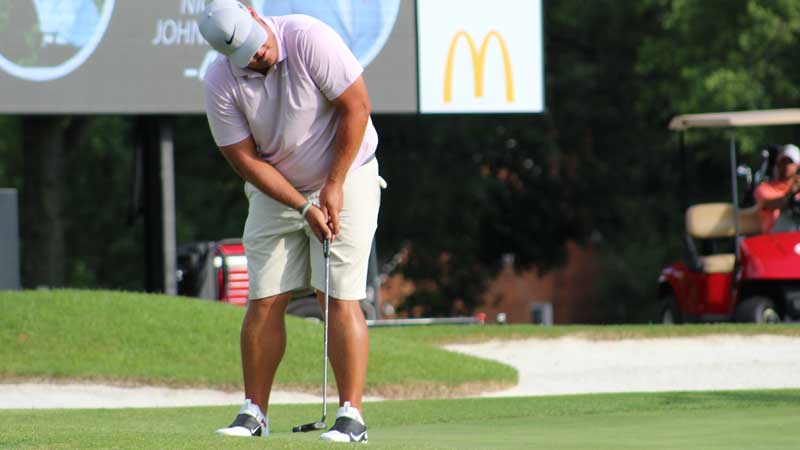 The 105th Clark’s Pump-N-Shop Kentucky Amateur will forever go down as one of the most dramatic in tournament history. The Country Club of Paducah produced one of the most memorable editions in championship history which resulted in Nick Johnston of Louisville outlasting Union’s Jacob Poore in a sudden-death playoff.

Johnston began the final round in a share of the lead with Lexington’s Evan Davis. Troubles with the putter plagued Johnston during his opening nine holes and after two consecutive bogeys on the 7th and 8th holes, Johnston was on the brink of falling out of contention when he reached the turn. Poore and Owensboro’s Andy Roberts each fired outward nines of 33 (-3) to give themselves a three-shot lead over Johnston entering the final nine holes.

A one-hour stretch midway through the back nine changed the course of the championship beginning on the par-four 15th. Poore, playing one group ahead of Johnston and Roberts, sunk a thirty-foot putt for birdie which gave him a three-stroke lead when Roberts made bogey on the 14th at the same time. Unfortunately for Poore, his approach shot on the 16th hole hit the top of a stone wall of a lake guarding the front of the green. The ball ricocheted long and left and came to rest out of bounds. Poore proceeded to make triple bogey on the hole, all while Johnston managed to make two consecutive birdies on the 14th and 15th holes. By the time Poore had reached the 17th tee with Johnston standing in the 16th fairway, Johnston suddenly found himself leading by one over Poore and Roberts.

Roberts needed birdie on one of his three remaining holes to have a chance, but he was unable to record one and instead made three pars to finish at 213 (-3). Poore rebounded from his mishap on the 16th with a par on the 17th and reached the par-five 18th in two which gave him a look at eagle and a possible victory. The eagle try finished a foot away, but a tap-in birdie provided him with a chance as Johnston came in behind him. With Johnston now in a tie with Poore, he also found the 18th in two and had an eagle putt from a similar position as the eagle putt Poore had. Johnston’s eagle effort finished a couple feet short of the hole, but stunningly Johnston missed the birdie putt that would have given him the outright victory.

Consequently, Johnston and Poore went back to the 18th hole in a sudden-death playoff. Poore played first and pulled his drive left of the fairway which forced him to lay up short of the green. Johnston once again reached the putting surface in two and had another eagle look from about twenty feet away. Poore could only give himself a birdie look from thirty feet away, and a miss meant Johnston once again had to two-putt for the title. This time, however, Johnston got down in two and secured the 105th Clark’s Pump-N-Shop Kentucky Amateur title.

“It feels great,” Johnston said after the playoff. “I had a little trouble on the front nine getting putts to fall, but once I made that birdie on 14 I kind of reminded myself there is actually a hole there and put myself in position during the last few holes. Obviously the three-putt on the 18th in regulation never should have happened, but I just told myself before the playoff started that I hit two great shots to get myself in that spot. I just wanted to do something similar to give myself another chance at making four, and if Jacob makes three to beat me, I would have been okay with that. Luckily though I made four that time and it ended up being enough to get it done.”

The Kentucky Golf Association would like to express its gratitude towards the Country Club of Paducah for being a phenomenal host site this week. The facility received extremely positive reviews from the field this week and was a terrific venue to have this championship. The KGA is also thankful towards Clark’s Pump-N-Shop for their cooperation as title sponsor. An event of this magnitude would not be possible without their assistance. Lastly, we want to thank each player and volunteer who helped make the 105th Clark’s Pump-N-Shop Kentucky Amateur possible. We hope to see you all in 2020 at Lexington Country Club.

Congratulations once more to Nick Johnston on his title! Click here to view the final results.