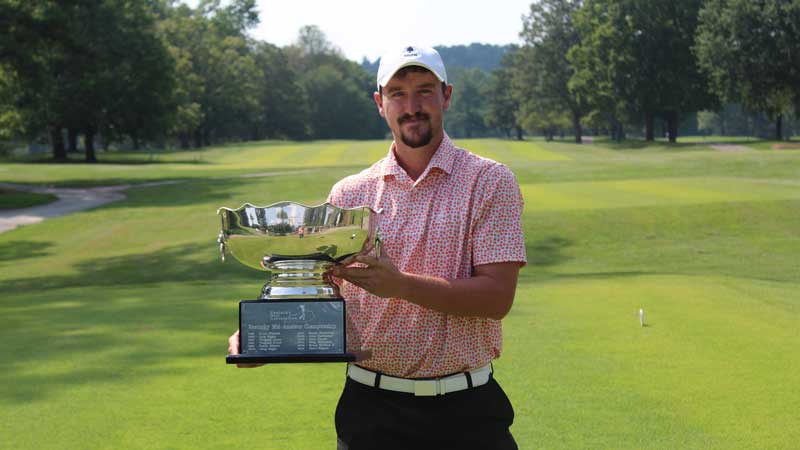 The over-arching theme of August was feel-good, emotional victories. We begin on that note at Bellefonte Country Club during the Clark’s Pump-N-Shop Kentucky Mid-Am. Making the cross-state drive from Paducah, Drake Stepter arrived on the grounds with a heavy heart having just lost his father in July. Following the first of two rounds, Stepter was one shot off the pace set by Josh Rhodes - a fellow Paducah acquaintance of Stepter’s. During the final round, Stepter made his move quickly with five birdies in the first seven holes. Two more birdies followed during the remainder of the round, allowing Stepter to coast to victory for his first State Mid-Am title in his first appearance at the event. The big victory on top of his father being at the forefront of his mind made it a tear-jerking atmosphere.

“I got a little emotional coming down the 17th fairway,” Stepter said. “So right in the middle of this run of good play I’ve had, I wish (my dad) was around to see it because I know he’d have been cheering me on, but it means a lot to get this done.”

Simultaneous to that tournament, the state’s Professionals were going at it 200+ miles away in Bowling Green at the Kentucky PGA Professional Championship. This event proved to be a contender for most exciting finish of the year, but it did not look like that would be the case early in the final round. After his 5th hole in the final round, 2018 champion Andrew Stephens was six shots up and appeared to be on the way to a stress-free victory. Spoiler alert: it was not stress-free.

Keith Ohr made birdies on the 7th, 8th, 12th, 14th, and 15th holes to cut into Stephens’ lead and obtained first place after Stephens made back-to-back bogeys on the 15th and 16th holes. With Ohr playing one group ahead of Stephens, it came down to the 18th hole where Ohr narrowly missed a birdie putt while Stephens got a must-make birdie to force a playoff with Ohr. From tee to green, the playoff appeared to be in Ohr’s control as he left himself a birdie putt inside of ten feet while Stephens was outside of Ohr staring at a par putt. Stephens made his putt to apply some pressure on Ohr, and a shocking three-putt for bogey from Ohr followed which clinched the victory for Stephens. Much like Stepter, this proved to be an emotional victory for Stephens.

“This is such a meaningful tournament to win and I’m thrilled to have won it for a second time, especially in Bowling Green,” Stephens explained. “I have a lot of family who’s not with us anymore that’s from (Bowling Green) and I had been channeling them throughout this tournament, so it’s super special to win at this location.”

Tony Wise was feeling greater emotions at work as well following victory in the Kentucky Senior Amateur. With University of Louisville Golf Club hosting, the final round in Simpsonville turned out to be one of the most difficult in terms of scoring. A little bit of rain and some wind accompanying the challenging layout made birdies – and even pars, hard to come by. Many faces had a chance to win with ten players, including Wise, finishing within three shots of the lead. Wise was the steadiest of them all, erasing a three-shot deficit at the start of the final round to win by one stroke for perhaps the biggest victory of his career.

“You have no idea how much this win means to me,” Wise elaborated. “All the hard work and learned patience paying off is extremely satisfying. To look at that trophy knowing my name will be on there forever is so humbling that it’s impossible to describe. Moments like this I think of my mom who passed away eighteen months ago. She always told me to stay focused and that’s what I did coming down the stretch today.”

The Kentucky Women’s Amateur Stroke Play Championship’s second playing went to Richmond and Boone’s Trace National Golf Club. That’s the home course of MacKenzie Neal, a Morehead State golfer who was determined to win in front of her family and friends. Neal was locked in a good back-nine battle with University of Kentucky golfers Rikke Svejgaard and Ryan Bender. The three collegians were in a world of their own on the leaderboard well clear of fourth place, but it was Neal who rose to the occasion and found herself up by a stroke heading to the par-three 17th. One of the shots of the year followed, with Neal coming a foot away from a hole-in-one. She tapped in for birdie and a two-stroke lead, and with an easy par on the last, Neal was able to savor a meaningful victory.

“It was really special to win in front of (my family and friends),” Neal described. “We have club tournaments out here all the time that they get to see, but they seldom get to see me play in amateur competitions or college events which are so important to me. To have them see me play and succeed in a true competitive golf tournament like this means a lot to me.”

The story of the month came from another female college golfer in the Commonwealth. It was Jensen Castle from the University of Kentucky as she won the U.S. Women's Amateur in New York. Hampered by injury, there were major doubts from Castle if she would be able to tee it up that week because of an ailing hip. She did get the ball in the air, but it didn't look good to start. Castle overcame a tough beginning to battle into a playoff for the 63rd and 64th seeds for the looming match play portion of the event. She and fellow UK teammate Marissa Wenzler made it through, but Castle's run was far from over.

The South Carolina native kept on winning and met Rachel Heck, the year's NCAA Individual champion, in the semifinals. Castle pulled off the victory and advanced to the championship match where she would defeat Hou Yu-Chiang in 2&1. By doing so, Castle became the first golfer (men's or women's) from the University of Kentucky to win a U.S. Amateur. She also became the first golfer with any sort of Kentucky ties to win a USGA championship since Emma Talley won the same event eight years earlier.

A dynasty in the Kentucky Senior PGA Professional Championship continued in August with Bruce Oldendick clinching this title for the fourth straight year at Hurstbourne Country Club. While the leaderboard reflects a nine-stroke victory, early on in that final round it did not seem like it would be a walk-in-the-park for the Pendleton Hills Head Professional. He was two shots down to Steve Cox after the final round’s 2nd hole, but a torrid run followed with Oldendick making five birdies in his last sixteen holes helping seal the latest victory in the Section’s biggest Senior tournament.

Kentucky’s best for the year in Drive, Chip & Putt were determined in the Sub-Regional Qualifier at Persimmon Ridge Golf Club. These sixteen players advanced to the Regional Qualifier during this event having already made it through Local Qualifying earlier in the summer:

And thanks to wonderful generosity and strong fundraising efforts during the month of August, more youth golfers will be developed to assume those places in the future. That was led off by the ISCO Industries Youth on Course Pro-Am presented by Kindred Healthcare where a record amount of money was raised benefitting the Kentucky Golf Foundation. It was also a historic day as it marked the final day Valhalla Golf Club was played with bent grass tees and fairways. A day later, Valhalla’s maintenance team began major renovations to transform it into a predominantly zeon zoysia golf course from the tee up until the green on each hole.

Back to fundraising, the KGF’s Online Auction was launched during this same event and ran through August with new benchmarks reached in this initiative as well. The golf community of Kentucky kindly donated dozens of items or experiences that ultimately raised more than $18,000 which will go towards Youth on Course, PGA HOPE and the Kentucky PGA Junior Tour among other things. Once more, if you donated something or bid on any of these items, we can’t thank you enough nor emphasize how much of a difference those efforts will make.

With that said, we close out August with these other winners throughout the month: