Tracing the Roots of Robert Costello and Nevel Meade 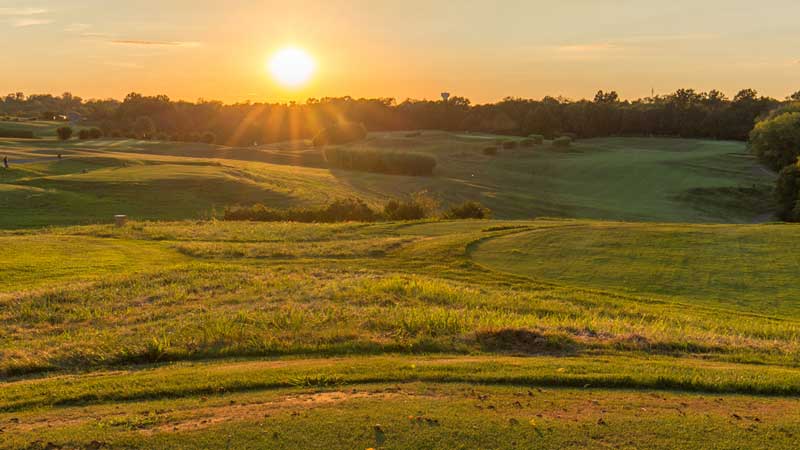 Golf has always been in Robert Costello’s blood. The Head Golf Professional at Nevel Meade Golf Club in Prospect was introduced to golf at a young age and did not need too much from others to determine his future laid within the golf industry.

“I started playing golf when I was three years old,” Costello exclaimed. “My grandpa and dad would just take me onto Louisville’s Metro Parks courses and I always had fun. When I got to seven or eight years old, I started receiving lessons from Kevin Greenwell, PGA.”

Greenwell is one of the Kentucky PGA’s most respected Professionals and operates one of Kentucky’s most popular facilities in Seneca Golf Course as their Head Golf Professional. At the time of his lessons with Costello, Greenwell was at Shawnee Golf Course. Greenwell helped shape the facets of Costello’s game and helped steer him further into golf’s great qualities. With the influence of his family and a great instructor in Greenwell, Costello began to put his concentration on golf despite playing a variety of sports in his childhood.

“While I was in high school, I knew I wanted to become a PGA Member. Originally, I was going to attend Methodist University in North Carolina to complete their PGA Golf Management program. As it turned out though, I heard about how Eastern Kentucky was going to get accredited in the future, so I went to the University of Kentucky for a year and then transferred to EKU where I ended up being part of their second graduating class.”

As per program standards at EKU, Costello completed an internship during each of his summers while working through the program. The journey for the Louisville native began in the nation’s capital via working at what is now Trump National Golf Club Washington D.C. (at the time of his internship it was Lowes Island Club). The experience there led Costello craving a position at the D.C area’s most famous course, Congressional Country Club. The attempt at going to the host of several major championships for his second internship fell short, but it turned out just fine. Costello came home and spent the summer working at Louisville Country Club with Scott Sedgwick, PGA who is the club’s long-time Head Golf Professional. Sedgwick, regarded as one of the state’s most well-connected PGA Members, recommended Costello to the Congressional staff following their summer together, and Costello found himself at the club for his third internship.

“I absolutely loved being at Congressional. I got to have a big role in their teaching program, which is always where my true passion’s been. My dad was in sales and a coach plus my mom was a teacher so I grew up around the teaching and coaching world. Stacy Miller-Arndt is the heartbeat of their junior program and became one of my primary mentors thanks to the work we did together. For as much as I enjoyed my time up there, I actually got a full-time job offer from Congressional later on but turned it down.”

“I did my final internship as a PGM student at University of Louisville Golf Club which transitioned into my first full-time job as their First Assistant Golf Professional. It really helped solidify my career and put a foot in the door for me and teaching, with some of those golfers still working with me nowadays at Nevel Meade.”

As is the case with nearly every PGA Professional, Costello’s craft must expand beyond teaching into other facets of Nevel Meade’s operation to ensure success. As he finishes his second year at the facility, Costello has overseen the outings and events, coordinates the work schedule and manages employees, runs the merchandising plan for their golf shop, coaches two PGA Junior League teams, and manages the club’s food and beverage along with maintaining quality conditions on course as part of consistent communication with superintendent, Todd Smith.

It has not taken long for Costello to fall in love with the Prospect layout which has made an impression on many of the folks who visit its links-style property. Privately-owned by the English family, Costello works closely with them in the form of tracking the facility’s budgets and projects. The work has helped raise Nevel Meade’s caliber even more thanks to a record year financially for the club, while golf course conditions are critically acclaimed as a result of the hard work put in by Smith. The latest example of great teamwork across the leadership paying off has been in the form of a project on the driving range which has seen a synthetic turf layer added to the back of the grass tee to enhance the practice facility to stay open longer and in high condition more often.

“Every day here brings something new. I love getting the chance to be in charge of a variety of things. Moving at a brisk pace and facing new challenges every day is something I enjoy. People are just really loyal to this facility and super friendly which makes it a rewarding place to work. I see myself staying here for a long time. We have a great family environment; I have been able to see this place grow and this is a unique spot not many people get the chance to work in.”

Nevel Meade has been open since 1991 and the loyalty is proven through many of the same faces frequenting the course over the twenty-eight years the club has been open. Todd Smith, the aforementioned superintendent of the golf course, has been around since opening day and even before the golf course’s unveiling, as he played a pivotal role in the design of the course. Lee English, the General Manager was the visionary for Nevel Meade and truly helped put the golf course on the map.

The vision for a golf course on the rolling hills of the Prospect land was in the works for the family and in the late 80s, it came to fruition. After interviewing several architects, Steve Smyers was chosen to lead the design. Smyers, who is considered by many to be one of golf’s most underrated designers, fulfilled exactly what the ownership desired. A links-style golf course where the priority was golf, not a housing community or development. Once the course was routed as Smyers intended and the supporting features such as the water supply and parking lot were determined, neighborhood developments could begin at that point but no sooner.

“Playing golf out here is great because you are in your own little world. You cannot hear any traffic and it is about as pure of a golf experience you will find in the Louisville area. We are fortunate that we have our own water source via the lake people see driving into the parking lot and we have bent grass throughout most of the property to keep the golf course in excellent shape. Todd and our Assistant Superintendent Devin Lorenz do phenomenal work and the facility has been lucky to have both of them here for so long.”

Nevel Meade has been a consistent home of events organized by Golf House Kentucky, with Costello being a constant competitor in Kentucky PGA Section tournaments. In the 2019 season, Costello finished the year ninth in the OMEGA Player of the Year rankings with the highlight being a T6 finish at the Kentucky PGA Professional Championship. The high finish means Costello secured the third alternate spot from the Section for the 2020 PGA Professional Championship which will be held in Austin, Texas. Should enough automatic qualifiers drop out of the event, Costello will venture to the Lone Star State with the opportunity to qualify for the 2020 PGA Championship in San Francisco, California.

“I love playing in our Section events. By nature, I am a very competitive person so it is always fun playing in them. Our events are very well run; we go to a variety of places in the state playing in a variety of formats and have a lot of quality players here to go up against. My favorite tournament is the Section Championship where it is just you and two rounds of stroke play against everybody. Finishing near the top this year was really cool and hopefully I receive a call next spring that I have a spot in the Professional Championship. Competing in that is a big goal of mine and getting a PGA Championship exemption some day would be amazing. It is a bit of a pipe dream and I know it takes a ton of work and dedication to your game in order to make that happen. Seeing Grover Justice play in the Barbasol Championship these last couple years has been really cool and I would love to have that spot some day too. The more high-level competition anyone puts themselves in, the more fun it becomes and the better player you turn into, so I just have to continue doing that.”