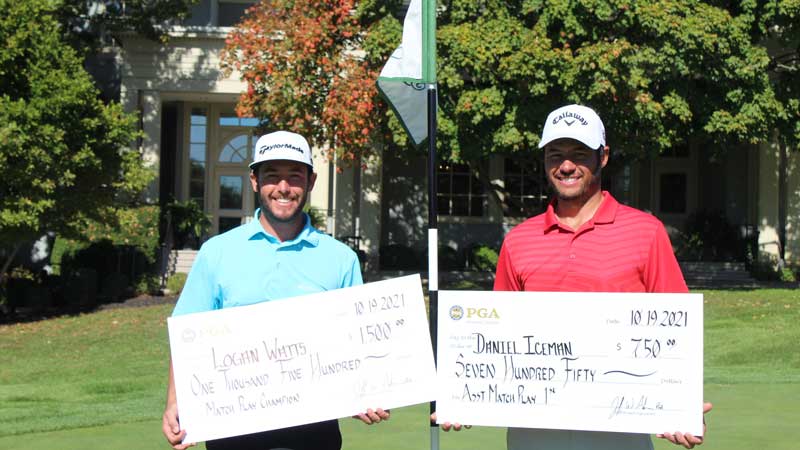 October, Kentucky’s final month of the tournament season, did not feature many tournaments, but the ones that were there featured more wonderful memories and excellent golf to cap off the 2021 season.

The KHSAA State Championships highlighted the month with Bowling Green Country Club hosting the pressure-packed tournaments for both Girls and Boys. The cream rose to the top in both competitions, beginning with Macie Brown who entered that week having won seemingly every tournament a junior golfer could win in Kentucky except for that tournament. But with a five-stroke victory, she got the victory she had most been looking forward to. She was the only player to finish with an under-par total score and only player to not have an over-par score during either of the two competitive rounds. She will have the opportunity to go back-to-back in 2022 during her senior year. Meanwhile, the Marshall County Girls' run of success continued as they doubled up their closest competition on the team leaderboard. They posted +38 for the tournament while second place ended at +76 in the latest amazing accomplishment from the orange and blue.

Matthew Troutman joined Brown in the winner’s circle and had also been looking for his first victory in this tournament. For more Brown parallels, he also was the only player to finish with an under-par score and did not have an over-par round either. But Troutman got his hands on both trophies available as he and his teammates from Christian Academy of Louisville also won the team competition in a tight race against Madison Central. CAL prevailed by a stroke for their first State Championship as a team in its golfing history.

While that was going on, Lake Forest Country Club was hosting the Feeders Supply Pro-Am where laughter echoed throughout the Arnold Palmer design. For the second time this season, Nathan Downs was the professional leading the way in a Section Pro-Am, who on this occasion helped guide Todd Whan, John Douglas and J.P. Gentry to victory.

Also taking place during State Championship week just down the street from Bowling Green Country Club was the KGA Invitational. This tournament offered players a chance to play Indian Hills Country Club in a competitive environment ahead of the 2022 Clark’s Pump-N-Shop Kentucky Amateur and Stephen Warren, who will almost surely be in that field, made some positive memories to take with him into next year as he shot the lowest score of the day with a 69 (-2).

While the State Am is undoubtedly the crown jewel on the KGA’s schedule, a new tradition on its schedule began in October with the Two-Person Scramble. In a nice change of pace from other tournaments, this fun format got played in KGA competition for the first time at Lexington Country Club. Heath Brownstead and Shawn Armstrong led the list of winners with the best gross score of the day at 64 (-8).

Another golf course with the initials LCC was hosting competition while that was going on, as Louisville Country Club represented the finish line of the season-long KPGA Match Play Championships. Ironically, all three players who would later be named the Section’s ROLEX Players of the Year lost in these championship matches. Logan Watts took down Andrew Stephens for the Member title, marking a home victory for the newly-promoted Co-Head Professional at Louisville Country Club. Daniel Iceman III defeated Nick Johnston in the title match of the Assistants bracket for the second straight year while Kirk Schooley upset Bruce Oldendick in the finals of the Senior bracket.

Match play remained prevalent that week at Big Spring Country Club – Harmony Landing Course where the Challenge Cup took place. The Ryder Cup-style event pitting a dozen top amateurs against a dozen top PGA Professionals went the way of Team KGA for the third straight time. They earned more than twice as many points than their counterparts for a 15.5-7.5 victory. Andy Roberts and Matt Epperson led the way for the amateurs, as they had perfect 3-0-0 records.

The final tournament of 2021 took place at Greenbrier Golf & Country Club with the Pro-Pro Series Championship presented by Golf Pro Payments. Mitchell Moore and Nick Newcomb took the title thanks to a total score of 133 (-11), leaving the gentlemen from western Kentucky as the final champions of the season.

With all that golf in the books, Players of the Year were recognized across each organization throughout November. A hearty congratulations once more to each of these individuals for their respective awards:

With the playing season in the books, attention in the winter months turned towards the first Kentucky Golf Hall of Fame Induction Ceremony since 2019. There at Griffin Gate Marriott, the classes of 2020 and 2021 were celebrated. Once again, congratulations to each inductee and their families on these lifelong accomplishments:

Unfortunately, in the time since that ceremony, the story in Kentucky has been the devastating storms that ravaged western Kentucky on the night of December 10. While golf takes a backseat during difficult times like these, it is evident how disasters like these can bring the community together. Take Indian Hills Country Club for instance, which received significant damage on its golf course. Many of the members there came together and immediately got to work cleaning up the debris left in the storm’s wake. While there is much still to be done there and throughout the inflicted areas across the state, it’s clear the Kentucky strong mindset is going to get the state through what has been a difficult couple of weeks. As always, however, if you know of a facility that needs help as a result of the tornadoes, please do not hesitate to contact Golf House Kentucky for help.

With that, our focus shifts towards 2022 and what promises to be another great year on the golf course. Kentucky golf has a lot going for it: a record number of PGA Jr. League participants, a record number of Youth on Course members, a record number of Kentucky PGA Junior Tour numbers, and record participation rates in tournaments of all kinds. More big things are on the way in 2022 and we can’t wait to see what’s in store for the sport next. To all of you who participated in any tournament or program stemming from Golf House Kentucky in 2021, thank you for making it a great year. We’ll see you on the links next year.