From Greenbrier to Bethpage: Get to Know Kelly Williams 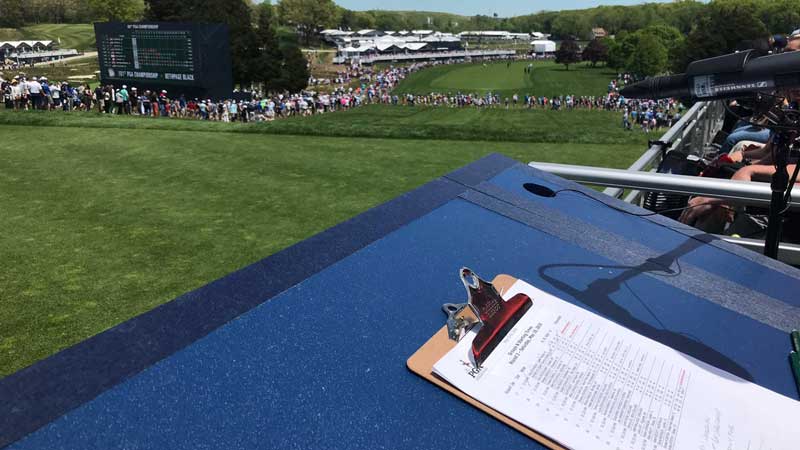 In the heart of Lexington, you can find Greenbrier Golf & Country Club a short drive east of Interstate 75. Greenbrier’s General Manager is Kelly Williams, PGA Professional and District 10 Director for the PGA of America’s Board of Directors. One of the most well-known and respected PGA Professionals in the Kentucky Section, Kelly has been making a strong impact on golfers across the region, influencing his fellow PGA Professionals to children just getting introduced to golf. Kelly recently returned to Lexington after a week away in New York to further grow the PGA of America’s efforts at the PGA Championship. You may not have realized it, but if you watched a good amount of weekend coverage, you probably heard Kelly’s voice at least once.

“On Saturday morning, I was the announcer on the first tee,” Williams said. “Then on Sunday evening I was the announcer on the eighteenth green from 4:00 p.m until the final pairing came through, meaning I was there to see Koepka’s winning putt. Part of the responsibility of being on the Board is to attend and support PGA of America Championships, and we work two or three shifts like that. I’ve been fortunate to draw some really good ones like those not just this year, but also at Quail Hollow in 2017 and at Bellerive in 2018. Part of my responsibilities also included hosting our partners, such as leaders from Cadillac and Pepsi on the golf course during the championship and visiting functions with them. I got to New York on Tuesday and left on the Monday after the Championship meaning I was there for all the competitive rounds, so it’s a great opportunity to network with PGA Professionals and fans. It is also very important that my wife, Lindsay gets to accompany me on some of these trips. She keeps things in order at home while I’m traveling on PGA business often, so she deserves to come when she can. Away from the Championship, I got to play National Golf Links of America on the Wednesday before the tournament, which was an amazing experience. I fully believe as PGA Professionals we need to make sure we’re playing golf, so doing that at a place like NGL was really special.”

Kelly’s week was full of meeting some influential names in and outside of the golf world, all while serving as an ambassador of the PGA of America, whether the meetings were planned or by chance.

“I met Renee Powell, a wonderful woman who every PGA Professional should be familiar with. She’s a new member of our Board and the second African American woman to ever play on the LPGA Tour. She’s done incredible things for golf and will continue to in the future, so it was an honor meeting her. Warren Bottke and I got to catch up briefly as well. He’s Brooks Koepka’s coach, so he’s now starting to get recognized nationally, but he’s a PGA Master Professional whose had a fantastic career. While I was starting, I got to chat with Phil Mickelson, Rickie Fowler and Charles Howell III for a little bit. I reconnected with Sung Kang, who won the AT&T Byron Nelson the week before the PGA Championship. He took me out for Korean barbecue in Los Angeles once and we have played golf together before so it was great catching up with him right after his first win on Tour. Outside of the golf world, I ran into NASCAR drivers Kevin Harvick and Ricky Stenhouse Jr. on the bus ride leaving Bethpage one day. They’re huge supporters of PGA Reach in the Carolinas Section and played Bethpage Black on the Monday following the tournament, so we bantered about what they would shoot in those conditions which was a lot of fun.”

“Tiger Woods was fighting to make the cut, and I got to thinking that I might not have many other opportunities to walk inside the ropes with him in a major championship. So I decided to stick around and walked with him, Koepka and Francesco Molinari for the rest of their round. It almost felt like a possible passing of the baton from Woods to Koepka because when Tiger first came on Tour, he was hitting it so much higher, farther and straighter than everyone else. I got a similar feeling while I was watching Koepka play. He’s on a different level than everybody else right now.”

Kelly’s passion for golf is palpable and has been a constant part of his life going back to his childhood. The journey towards becoming a PGA Professional started like that of many PGA Members; he was around the game and acquired the desire to have his own impact on golf. Where Kelly’s inspiration drew from, however, differs from that of most people in the golf industry.

“My dad worked in horse racing and often spent long hours in the office during race meets and sales in order to be successful in that field. So my mom did a tremendous amount for our family at home, but I noticed my dad had an extreme passion for what he did, regardless of the amount of hours or days it took up. I decided I wanted to acquire that same kind of passion for some facet of business. It didn’t take me long to realize I wanted it to be in golf. I went on to play a year of college golf which I didn’t particularly enjoy because of some of the conditions we had to play in, so then I got serious about a career in golf which led to me realizing I could make a living in the golf industry before I even graduated. I started talking to PGA Professionals about what I had to do, they told me the process that was required to become a PGA Member, and that kicked everything off for me.”

Kelly is hard-pressed to have found a better landing spot than Greenbrier. As General Manager, he has an instrumental role in everything the facility does, but the enjoyment in his work is as high as it’s ever been.

“I have a unique role compared to most General Managers in golf as I still get to do a fair amount of teaching. We do a middle school golf clinic in the fall and spring which is maybe my single favorite thing we do. After kids get out of school, they come out and we do activities with them. They’re not necessarily the most successful golfers, but it’s very rewarding to see them do something like take driver on a par 3, nestle it up by the green and watch how excited they get.”

Daily responsibilities for Kelly are relatively simple in that his job is about growing the game, growing Greenbrier and supporting his employees. There hasn’t been a day where Kelly has woken up and dreaded going to work, a passion that has led to noticeable success for Greenbrier.

“My number one task is member retention and growth. It is much easier to keep a member than it is to bring in a new one. Members are obviously critical to our success so it’s important they have lots of activities to enjoy, therefore we make sure everything we do is first class. Our ownership has a lot of trust in me to do whatever I feel is best for the club. That translates to a great team mentality that’s been established. From the ownership, to our Head Professional Tommy Brummett, to our Assistant Professionals, to our interns, we have a family feel. I make sure everyone has the resources and supplies they need to be successful, then I stay out of their way because I know they’ll do a great job. If they need me, I’m more than happy to help.”

In the future, Kelly aspires to continue with golf’s growth at Greenbrier and on the nationwide scale with the PGA of America, while simultaneously improving his own golf game.

“I love my involvement with the PGA of America and want to stay involved, whether it’s through assisting with the transition of headquarters moving to Frisco, Texas, running for national office or anything else that arises. At Greenbrier, we have interesting plans in the pipeline which would support our initiatives that lead to more opportunities growing and adapting the game for millennials. As for me, I want to compete on the KPGA Section level a bit more. 2017 and 2018 weren’t very competitive due to time on the road. I’m working to practice and play a lot more and have really enjoyed getting the chance to play in our Section tournaments so far this season. I don’t know if I’ll ever win, but maybe cashing a few checks while enjoying the game and spending time with other KPGA Members would be fantastic. Ultimately, I just want to legitimize my passion for golf to my membership and my son. I’m still a student of the game and always will be. Contributing in any capacity to the game will always be at the forefront for me.”