LOUISVILLE, KY (November 8, 2022) – The Kentucky Golf Association’s Players of the Year for the 2022 season have been determined with five gentlemen and four ladies receiving these prestigious accolades. These honors were determined by their performance in top local events along with USGA National Championships.

Matthew Troutman is the recipient of the John C. Owens Player of the Year title, the top award given to the state’s male amateurs. The 18-year-old from Louisville made history in June when he became one of the youngest players ever to win the Clark’s Pump-N-Shop Kentucky Amateur in its 108-year history. That victory at Indian Hills Country Club highlighted a season in which he further submitted his junior career as one of the best the state has ever seen. A runner-up finish in the Kentucky Open presented by Persimmon Ridge where he was the low amateur added to his case, making him the first player since Logan Hogge in 2015 to finish in the top-two at both the Men’s State Amateur and Men’s State Open in the same season. Now, Troutman is at the University of Oklahoma completing his freshman year with the Sooners.

“Going into the summer, my goal was just to try to have fun on the golf course as I headed into college,” recalled Troutman. “To win Player of the Year just shows testimony to playing golf without mental blocks and making the process enjoyable. It shows at the end of the day, we are the only ones holding ourselves back. The most memorable aspect of the season has been the memories I’ve made on the course with my friends and all the new people God has placed in my path as I begin a new chapter in my life.” 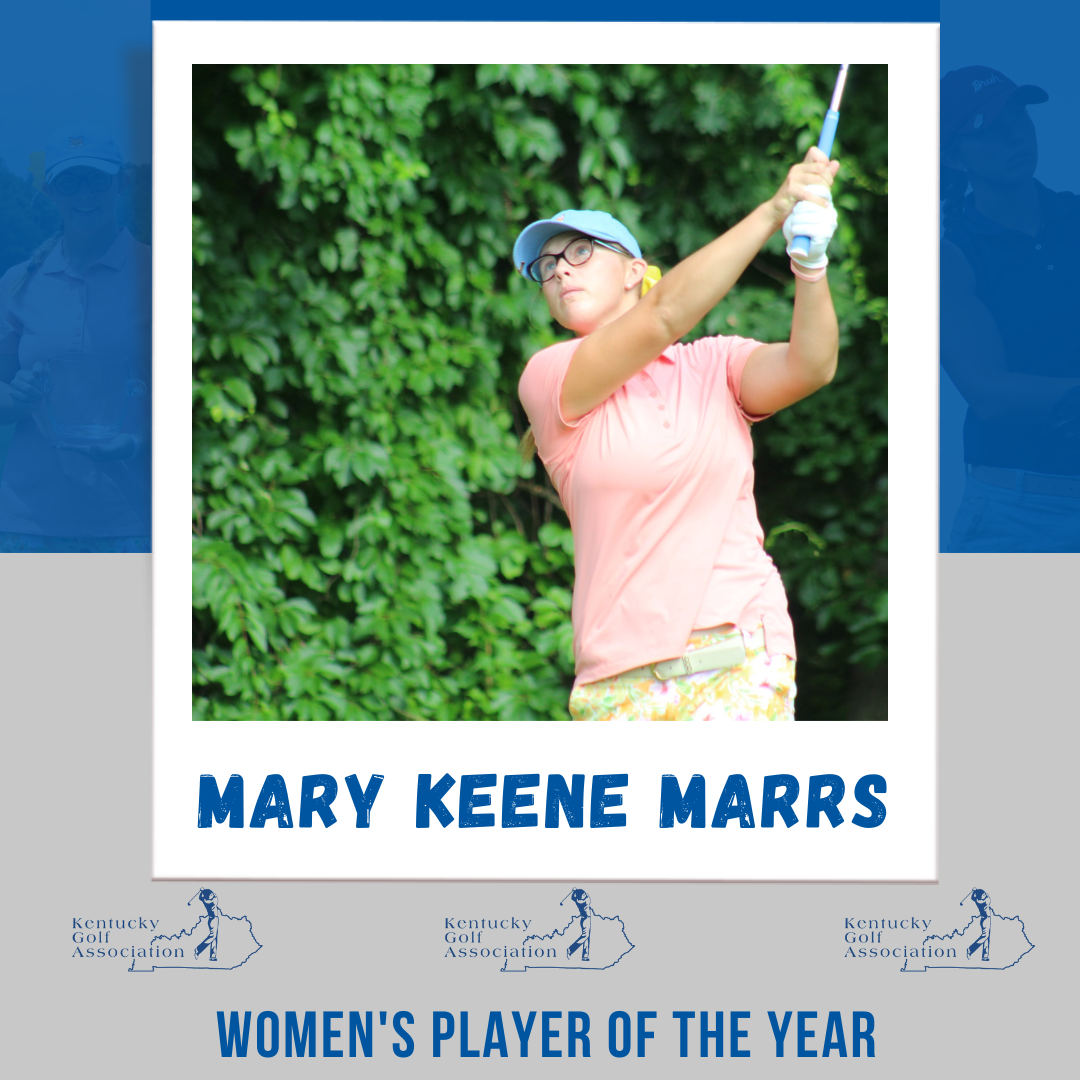 The state’s top female is Mary Keene Marrs as the Lexington native is the KGA Women’s Player of the Year. Now a freshman at Eastern Kentucky University, the newfound Colonel was a contender in every tournament she competed in this summer. She was the runner-up to Ke’Asha Phillips in the Kentucky Women’s Open, reached the semifinals of the Clark’s Pump-N-Shop Women’s Kentucky Amateur, and posted top-five finishes in the Kentucky Women’s Amateur Stroke Play Championship plus the Kentucky Girls Junior Amateur. Additionally, she notched top-five finishes in each of the AJGA tournaments held in Kentucky at Bellefonte Country Club and Big Spring Country Club – Harmony Landing Course. It was a breakout year for the Lexington Christian Academy graduate on the state’s biggest stages and provides great momentum for her heading into 2023.

“This honor means a lot to me," said Marrs. “I have worked very hard this year both in the gym and on the course. I am very pleased to see how my hard work has paid off this season with solid finishes in both the Women’s State Amateur and Women’s State Open. I am very grateful for my family and my coaches who have encouraged me pushed me to get to this point. 2022 was a great year and I am looking forward to working even harder this upcoming year for an even better 2023 season!” 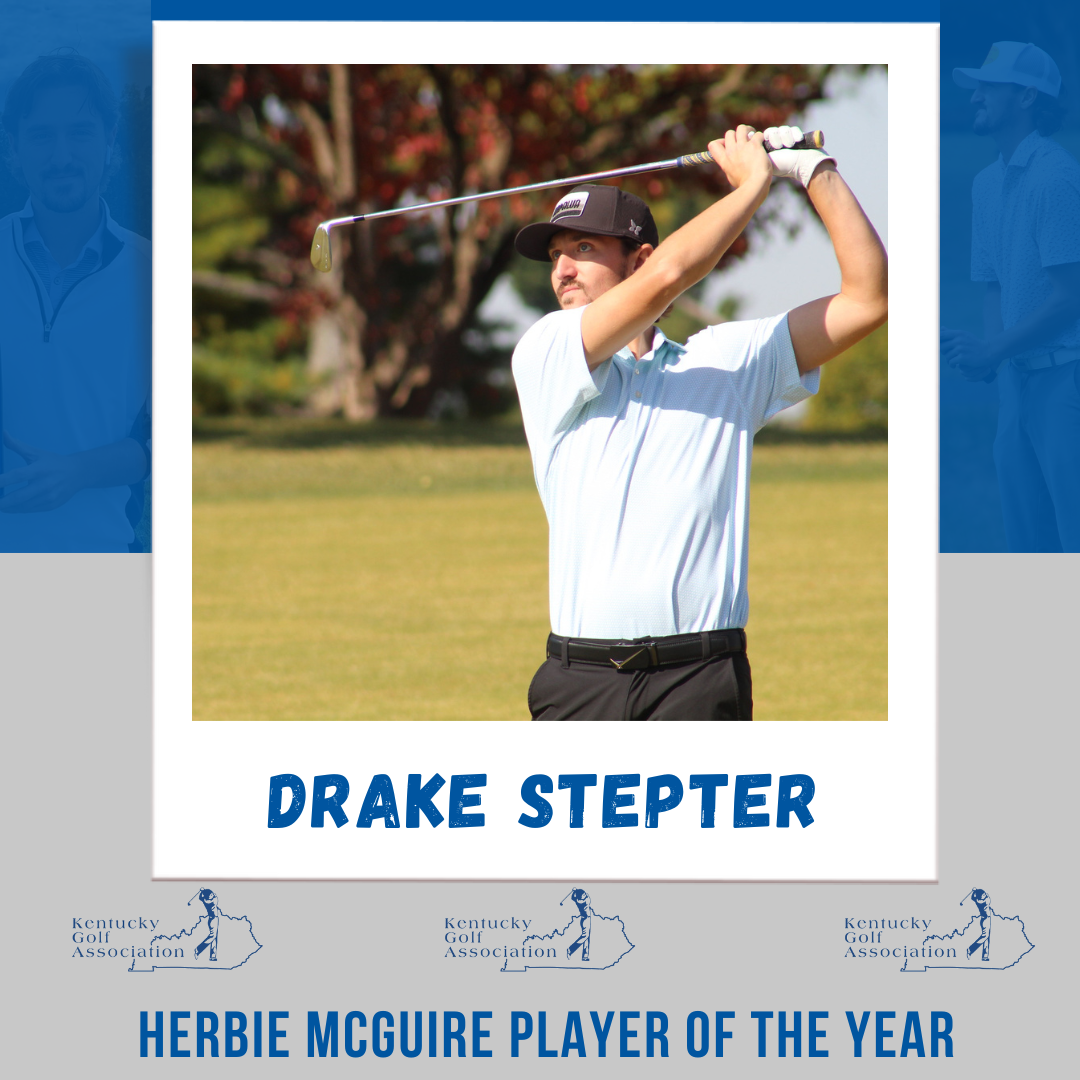 Drake Stepter is the Herbie McGuire Player of the Year, recognizing the top male mid-amateur in the state. The Paducah native had already taken one of the Western Kentucky Am Series Player of the Year titles and can add this honor to his list of 2022 accomplishments. His tournament record this season was highlighted by reaching the semifinals in the State Match Play Championship, finishing T4 at the Clark’s Pump-N-Shop Kentucky Mid-Am, and a T11 finish at the Kentucky Open presented by Persimmon Ridge. Stepter also finished runner-up to Troutman in the John C. Owens Player of the Year standings.

“I knew I came up just short in the primary Player of the Year race, but this is very cool news,” exclaimed Stepter. “I can’t thank everyone at Golf House Kentucky enough for everything they do for us. This year was just the beginning of a process to continue getting better. There’s still a lot I want to accomplish in golf and make good on all those hours my dad spent teaching me how to play. We have a lot of unbelievable players in Kentucky, both in the present and past, and my goal is to be a part of that group. I have big expectations for 2023 and am already looking forward to Kearney Hill (host of the Clark’s Pump-N-Shop Kentucky Amateur) and Persimmon Ridge (host of the Kentucky Open) next summer.” 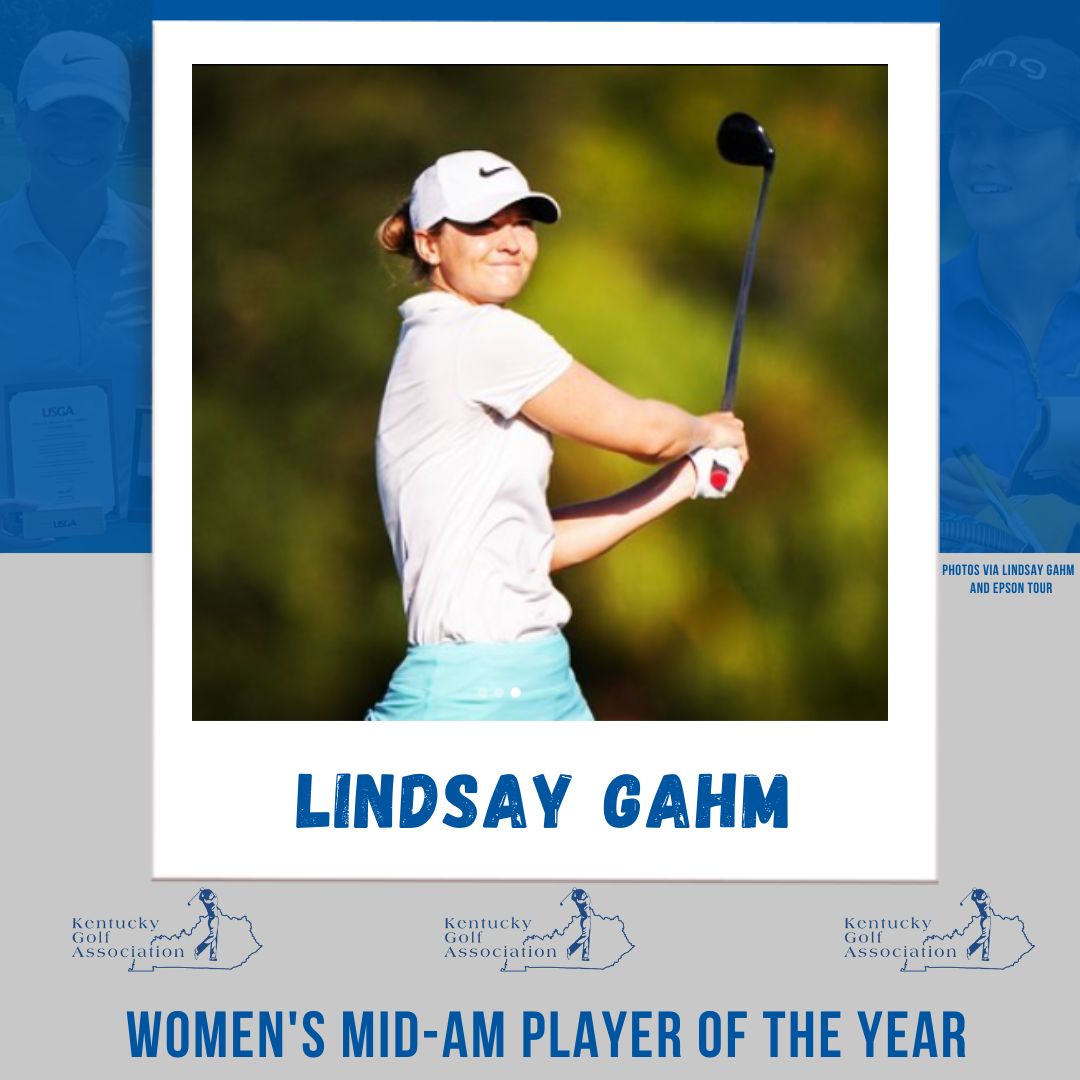 Stepter’s counterpart on the women’s side is Lindsay Gahm of Louisville who is the Women’s Mid-Am Player of 2022. The former LSU Tiger was the medalist in the state’s qualifier for the U.S. Women’s Mid-Am. Her presence at the championship this September in Florida was evident to her competitors as she finished T17 in the stroke play portion of the event to advance to match play. She made it to the round of 16 and was edged out in a 2&1 match to the top-seeded Jennifer Peng. Gahm’s fiancé, Austin Gutgsell, captured the Clark’s Pump-N-Shop Kentucky Mid-Am making it a decorative year in the mid-amateur ranks for their household.

“I want to thank the KGA for this incredible award,” stated Gahm. “Being born and raised in Kentucky, this means a lot to me as it’s an honor to represent the state. After regaining my amateur status this summer, I’m very excited to be back playing tournament golf and competing for the love of the game. I look forward to this new chapter and the camaraderie surrounding mid-am golf.” 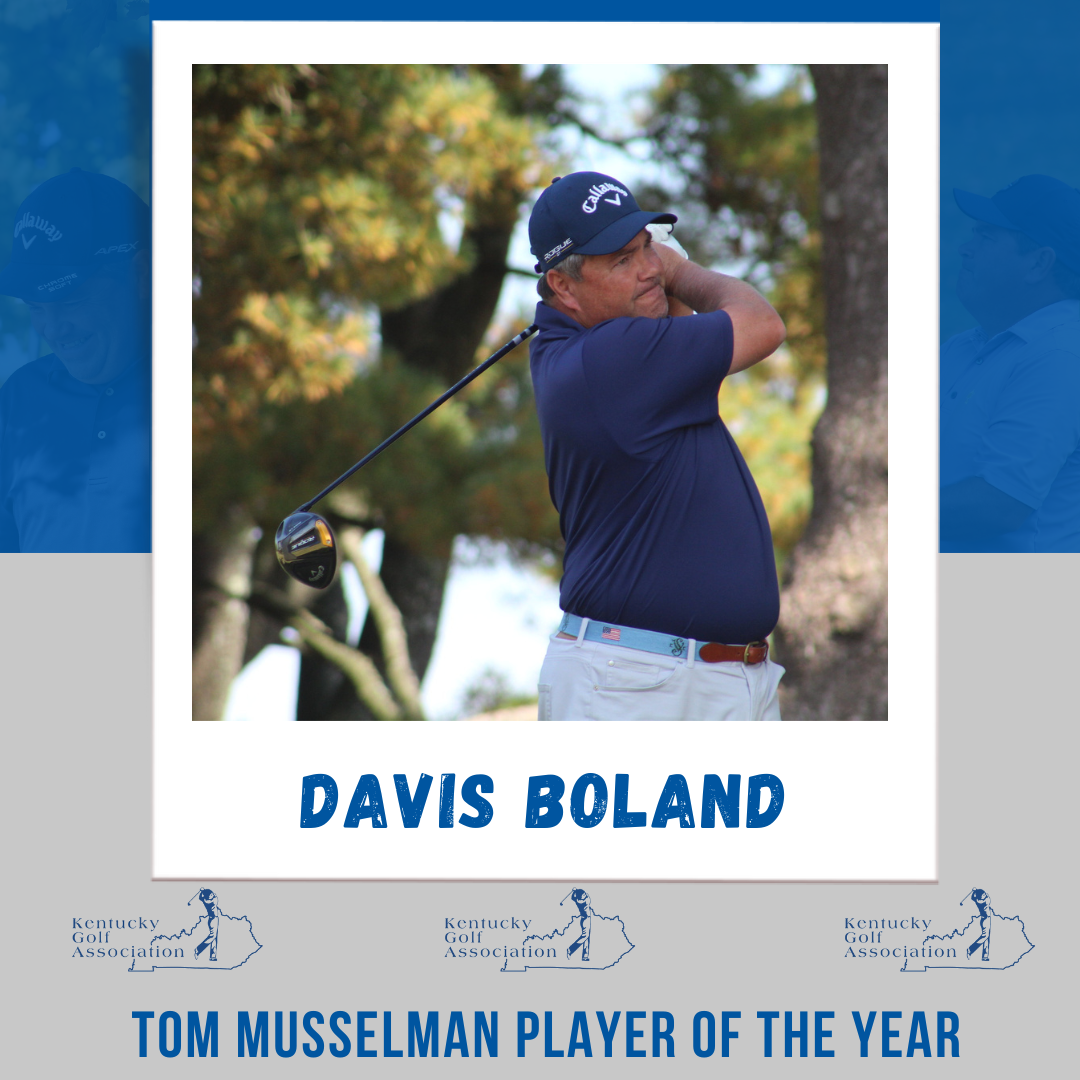 For the first time in his career, Davis Boland is the recipient of the Tom Musselman Player of the Year honor highlighting the top male between the ages of 50-59. He found the winner’s circle at Danville Country Club alongside Rodney Chancey during the Kentucky Senior Team Championship and nearly did so once more at the Clark’s Pump-N-Shop Kentucky Senior Amateur after being edged out in a back-nine battle with Gary Backlund. Boland’s name was found twice on USGA leaderboards during the season as he competed in the U.S. Amateur Four-Ball Championship with Josh Rhodes before getting to senior golf’s biggest stage with an appearance at the U.S. Senior Open.

“It is an honor to win the Tom Musselman Player of the Year award,” explained Boland. “To win an award named after Mr. Musselman, someone who has given so much to the game as a player, club owner and ambassador for golf, and growing it the way he has is something I am very proud of. One of my goals for the year was to win this award and I knew it would be a challenge with all the great players in Kentucky over the age of 50. I had to play well all year to stay ahead of these guys and they kept pushing me until the end. This year was memorable for a variety of reasons, but the U.S. Senior Open was an experience I won’t soon forget. I want to thank the KGA for all they do for the game and to Mr. Musselman for his dedication to the sport.” 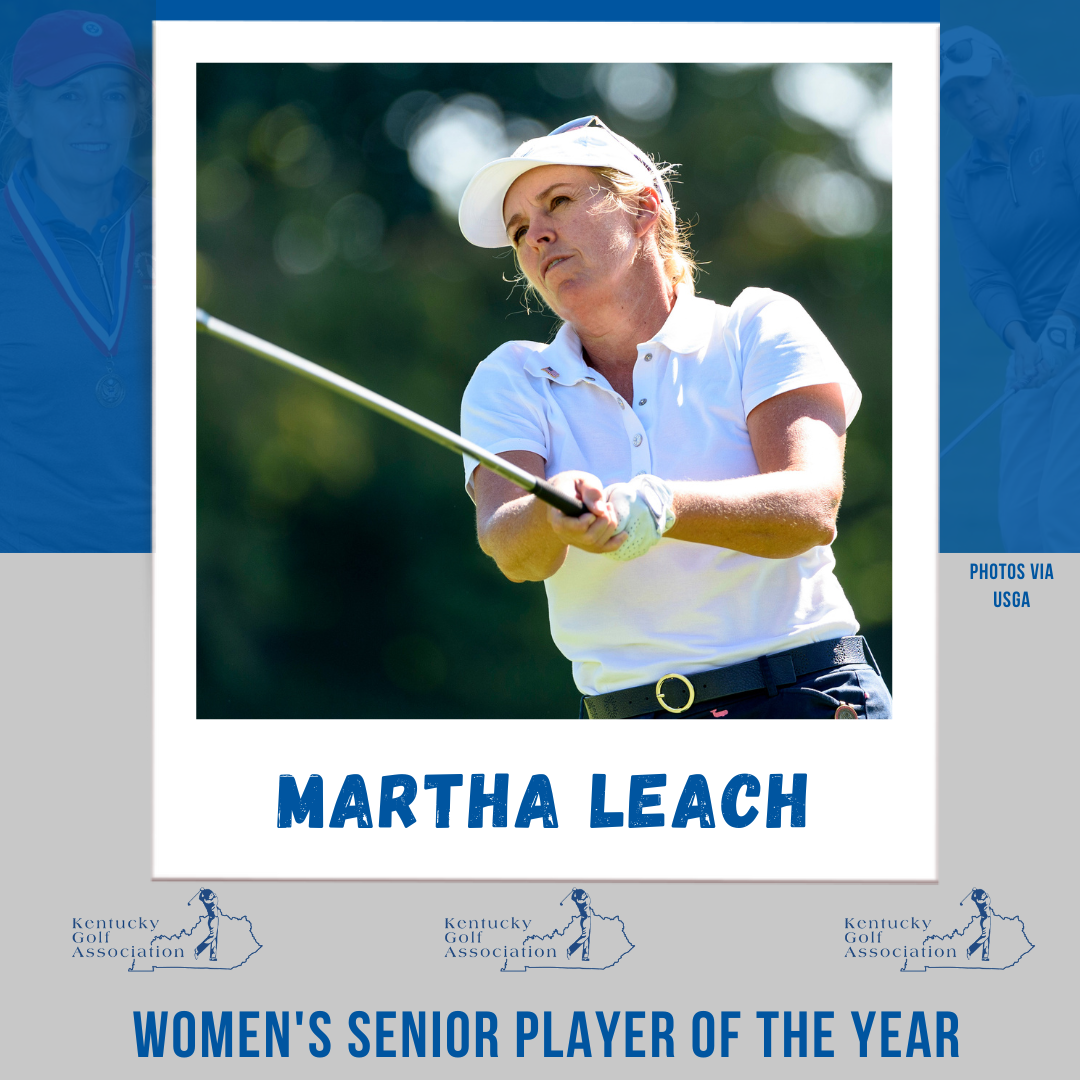 Martha Leach, a three-time recipient of the KGA Women’s Player of the Year title, is the Women’s Senior Player of the Year for 2022. Four appearances in USGA National Championships earned this honor for Leach. She made history by being in the field of the USGA’s first Alaskan-based competition as Leach competed in Anchorage at the U.S. Women’s Senior Amateur. The Hebron product finished T6 in stroke play and reached the Round of 16 in match play where she was clipped in a 19-hole match.

“It’s always wonderful to be recognized for chasing that little white ball around,” quipped Leach. “2022 was an incredible year for me with tournament experiences in Alaska and Washington (at the U.S. Women’s Amateur). Even though I didn’t notch any victories, I achieved some personal goals. Little ball… big dreams.” 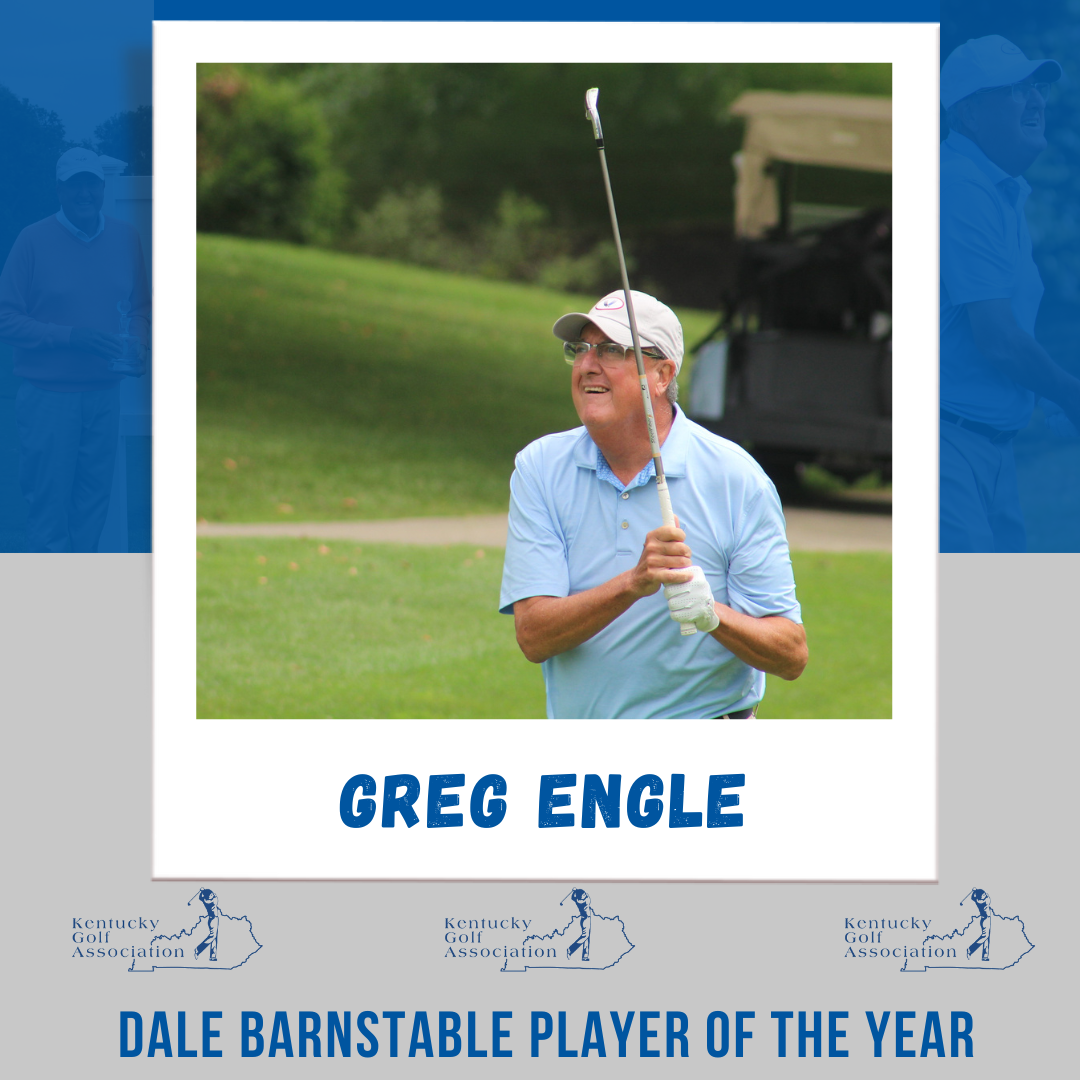 Greg Engle, no stranger to the KGA’s Player of the Year titles, is the Dale Barnstable Player of the Year by virtue of being the top male between the ages of 60-69. A couple of team victories early in the season with David Rudder at Frankfort Country Club and Danville Country Club laid the groundwork for a big finish to the season as an individual. Engle took the Masters Division’s title at the KGA Am Series Championship and the Clark’s Pump-N-Shop Kentucky Mid-Am to pull ahead of Tommy Fike and snag the title.

“I had the pleasure of playing golf with Mr. Barnstable,” recalled Engle. “He was a man of great integrity and an individual I’m honored to have my name associated with in the golf community. I knew late in the season I had to win the last couple of events to get this award. A solid round at Lexington Country Club in the Am Series Championship got me started and I was fortunate to play two good rounds in the State Mid-Am as well.” 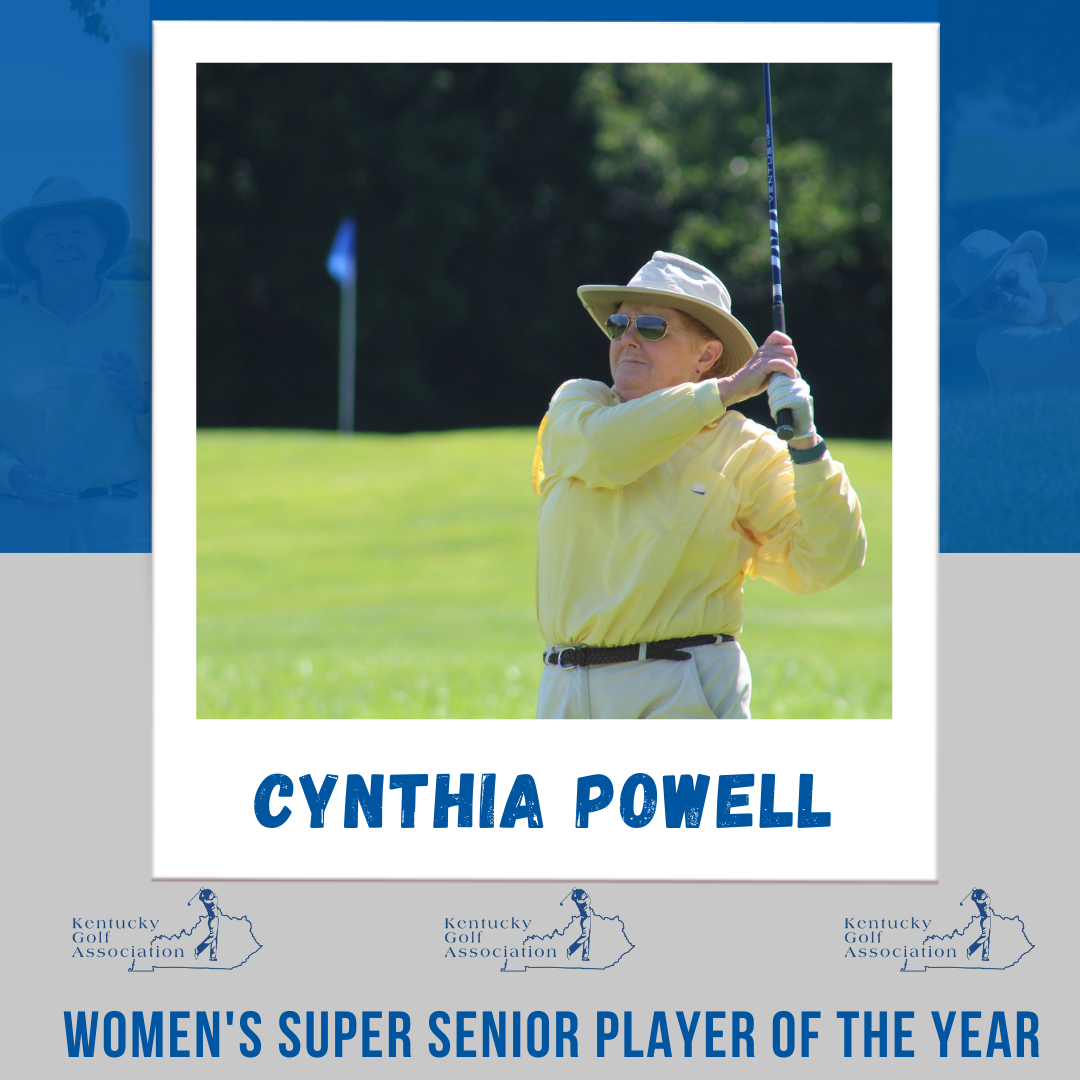 Cynthia Powell rounds out the list of female honorees as the Women’s Super Senior Player of the Year. A three-stroke victory in the Senior Division at the Kentucky Women’s Amateur Stroke Play Championship earned her second career victory in that event, and she nearly won the Clark’s Pump-N-Shop Women’s Kentucky Senior Amateur for the second time as well. A runner-up finish to Susan Stewart at Elizabethtown Country Club, however, did seal this title for her.

“It’s so exciting to win the KGA’s Women’s Super Senior Player of the Year,” stated Powell. “Golf is such a great game for players of all ages and abilities. To win this award just adds to my love of competitive golf and the camaraderie of the wonderful women I have the privilege to play with in each tournament.” 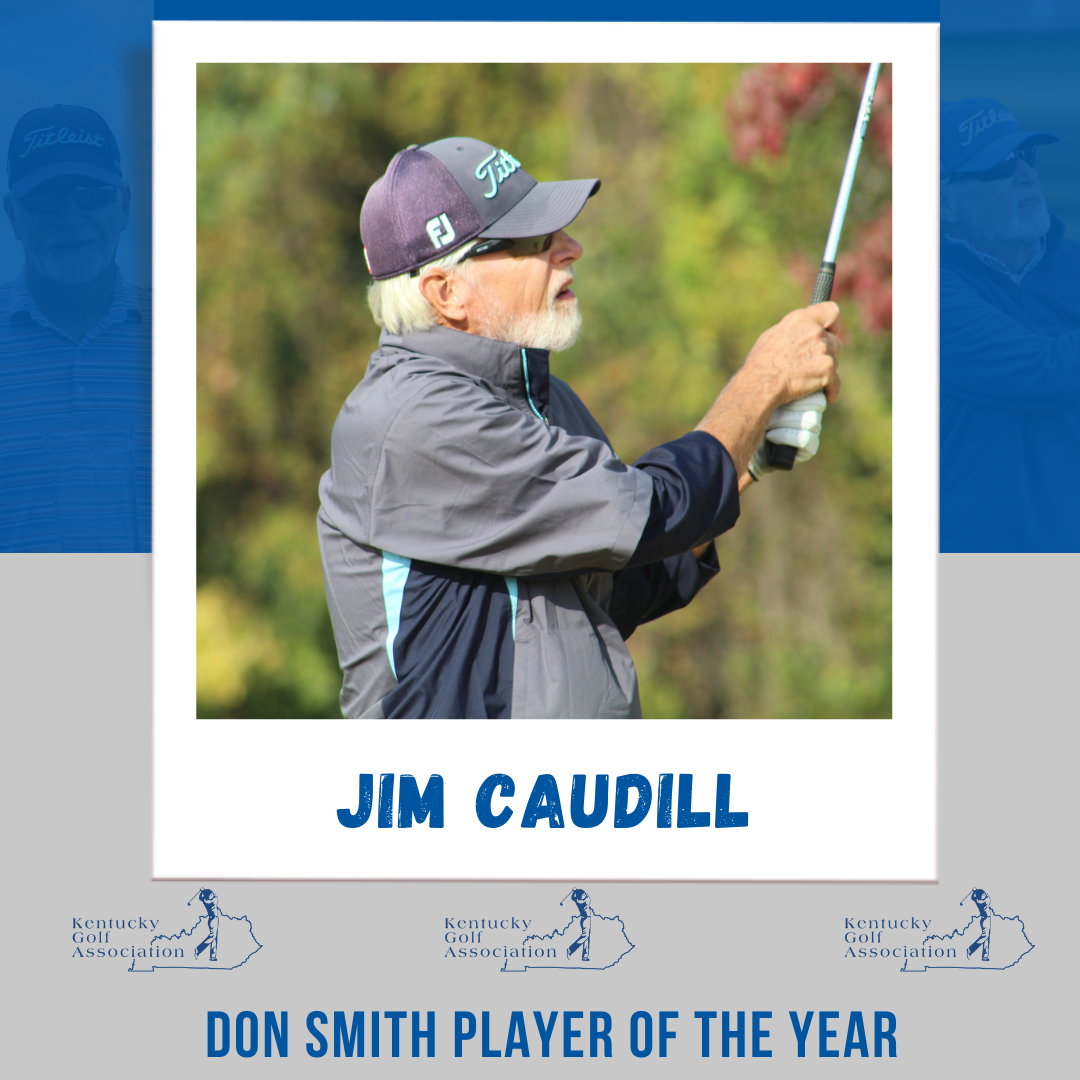 For the second consecutive season, Jim Caudill has won the Don Smith Player of the Year honor as the best male player over the age of 70. The Morehead resident was twice a winner in KGA Am Series events and captured the Legends Division’s title in the Kentucky Senior Team Championship alongside Mike Price. In nine starts throughout the season, Caudill never finished outside the top-five in his respective division.

“It’s an honor to win this award for the second consecutive year,” said Caudill. “Setting goals and reaching them always brings much satisfaction. I want to thank the KGA, their staff, and all the great host clubs for making this a special year for me.”

The Kentucky Golf Association offers its congratulations to each of these nine players on terrific seasons. The KGA would also like to these golfers and all participants of KGA events from throughout the year for their support of the tournament program.