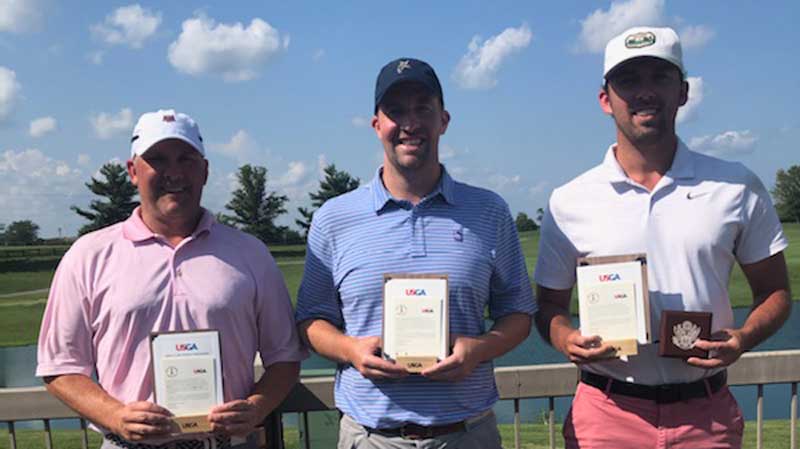 RICHMOND, KY (August 12, 2021) – As it turned out, shooting a sub-70 round in the U.S. Mid-Amateur qualifier at Gibson Bay Golf Course was the achievement needed to advance to one of the final USGA championships of 2021. Kentuckians Bradley Sutherland and Kevin Cumiskey along with Indiana’s Jacob Coffey finished in the top-three in Richmond on Thursday, which guarantees each of them an exemption for next month’s national competition which will take place at Sankaty Head Golf Club in Massachusetts.

Sutherland and Coffey share co-medalist honors after both players shot rounds of 68 (-4). Sutherland was bogey-free in his plotting of Gibson Bay whereas Coffey had a couple of bogeys amidst a six-birdie performance. Coffey played the outward nine in 32 (-4) which was the best nine-hole score of the day and a big part of the reason why he’ll find himself in New England this fall.

Cumiskey finished in solo third to lock down the final automatic exemption with a score of 69 (-3). A clutch finish with two birdies in the final four holes, including one on the par-four 18th, loomed large in his qualification. A par on the last would have resulted in a playoff for the final spot.

Stuart Smith would have been in that playoff as he shot 70 (-2), but that solid result does give him the first alternate spot. Mike Asay won a playoff against Ben Fuqua after both players shot 71 (-1), which gives Asay the second alternate position.

The Kentucky Golf Association extends its thanks to Jason Eberle, PGA Head Golf Professional and his team at Gibson Bay for their assistance in hosting today’s qualifier. Additionally, the KGA sends its appreciation towards each player who competed in this qualifier.

This event marks the final USGA qualifier to be held in Kentucky for the 2021 season. The KGA eagerly looks forward to hosting several USGA qualifiers once again in 2022 with those events, sites and dates to bet set this winter.