About
Kentucky Golf Association
GET A HANDICAP 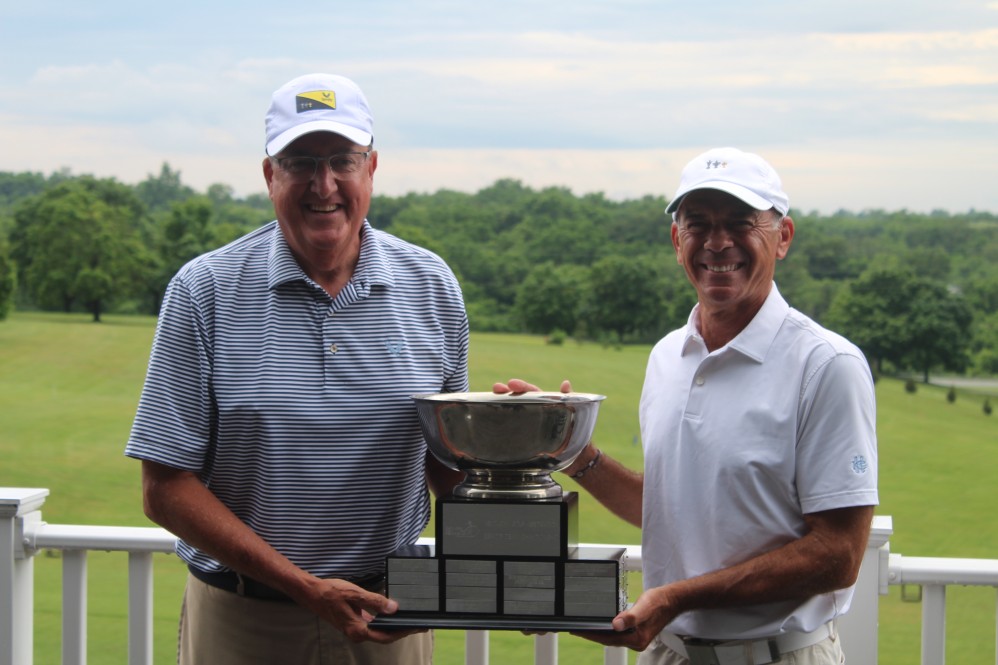 RICHMOND, KY (June 8, 2021) - The Kentucky Senior Team Championship was a success and wrapped up late Tuesday afternoon. Despite a storm passing through Richmond and causing a delay, gross champions were able to be crowned in each of the three divisions at play. The final round provided players with excellent scoring opportunities as conditions today were perfect.

Greg Engle and David Rudder caught fire and grabbed the Senior Division title after posting a stellar round of 65 (-7) today. They combined for six birdies and one eagle today in four-ball play which contributed to a two-shot victory. The Lexington natives' two-day total was 132 (-12). Sitting in solo second after a total of 134 (-10) and a final round of 67 (-5) was the duo of Buddy Bryant and Scott Ray, the 2020 champions of this event. They made birdie on every par-five today and only made one bogey. Coming in for a tie for third were the teams of Mike Brumfield/Mike Crowe and Tony Wise/Tom Campbell after a two-day total of 136 (-8).

In the Masters Division, first round co-leaders Rick Harp and Tom Majcher took care of business and won by three shots after rounds of 71 (-1) and 66 (-6) for a total score of 137 (-7). They made five birdies and one eagle today which contributed to their win. The Frankfort natives were the only duo in their division to post two rounds under par. The low round of the day in the division was provided by Happy Rakestraw and Steve Rogers, who had a birdie fest en route to a final round 65 (-7). Rakestraw/Rogers finished with a two-day total of 140 (-4) for a solo second finish.

Elmo Greer and Wally Langley put together perhaps the clutchest round of the day with a 67 (-5) to clinch the Legends Division. Greer/Langley went bogey-free and canned five birdies. Their two-day total of 140 (-4) edged first round leaders Steve Houchen and Mike Lenox by one stroke. The Houchen/Lenox duo recorded a final round of 71 (-1) after starting off red hot as they made birdies on their first three holes. Sitting in a tie for third following a two-day total of 143 (-1) are the combos of Jimmy Dunaway/Bruce Walters and Terry Bowman/Rick Cain.

The winners of the net divisions are the following:

- Across all divisions, there were three eagles made today. One came on the par-four 4th where Greg Engle/David Rudder holed out for a deuce. Rick Harp/Tom Majcher made one on the par-five 12th and Paul Douglas/Bill Douglas made eagle on the par five 13th.

- In spite of the eagles on those holes, it was the par-five 9th which was the easiest statistically today for the second straight day. Its stroke-to-par average was -0.05 with eighteen birdies made there today.

The Kentucky Golf Association extends its thanks to Teddy Lausier, PGA Head Golf Professional at The University Club at Arlington and his staff for helping create a successful tournament over the past two days.

Next up for the KGA will be the second event of the Western Kentucky Am Series at Kentucky Dam Village on Sunday, June 13. Then on June 15-17, the 107th Clark’s Pump-N-Shop Kentucky Amatuer will take place at Audubon Country Club in Louisville.