KGA Am Series Players of the Year Announced

LOUISVILLE, KY (September 22, 2021) – The Kentucky Golf Association’s Amateur Series tournaments for the 2021 season concluded earlier this month and its Players of the Year have been confirmed.

Six of these popular tournaments were held throughout the year, with University Club of Kentucky, Oxmoor Country Club, Pendleton Hills, Winchester Country Club, Frankfort Country Club, and Hunting Creek Country Club each hosting an event. Points were earned across all divisions at each tournament which led to seven players emerging with the eight different awards available. 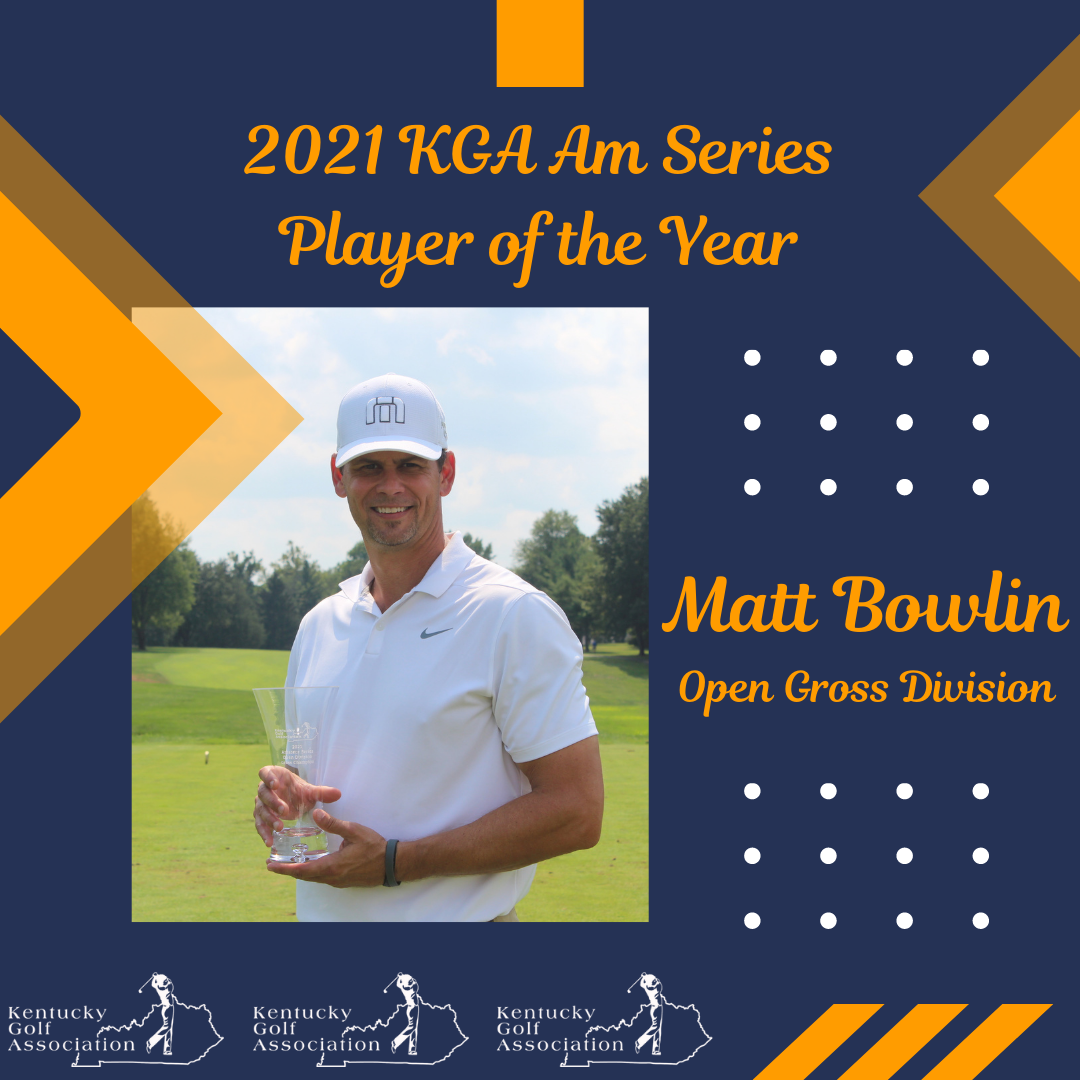 Leading them off is Matt Bowlin of Union who won the Open Gross Division. Bowlin played in three of these events this season and finished in the top-five each time with a co-victory at Winchester Country Club highlighting his results. With points doubled in the Am Series Championship at Hunting Creek Country Club, a runner-up finish in that event sent him to the top of the standings with this award attained as a result.

“I just really enjoy competing and feel blessed to have the opportunity to do so,” Bowlin said. “There are many talented players who compete throughout the state in these events each year. I’ve had the privilege to compete with them the last several years, including the KGA Am Series race. We all lose more than we win, but the important thing is to take from each experience and become better on and off the golf course. It’s just a game, but it’s fun to achieve victory when possible. All glory goes to God in my victories both on and off the golf course.” 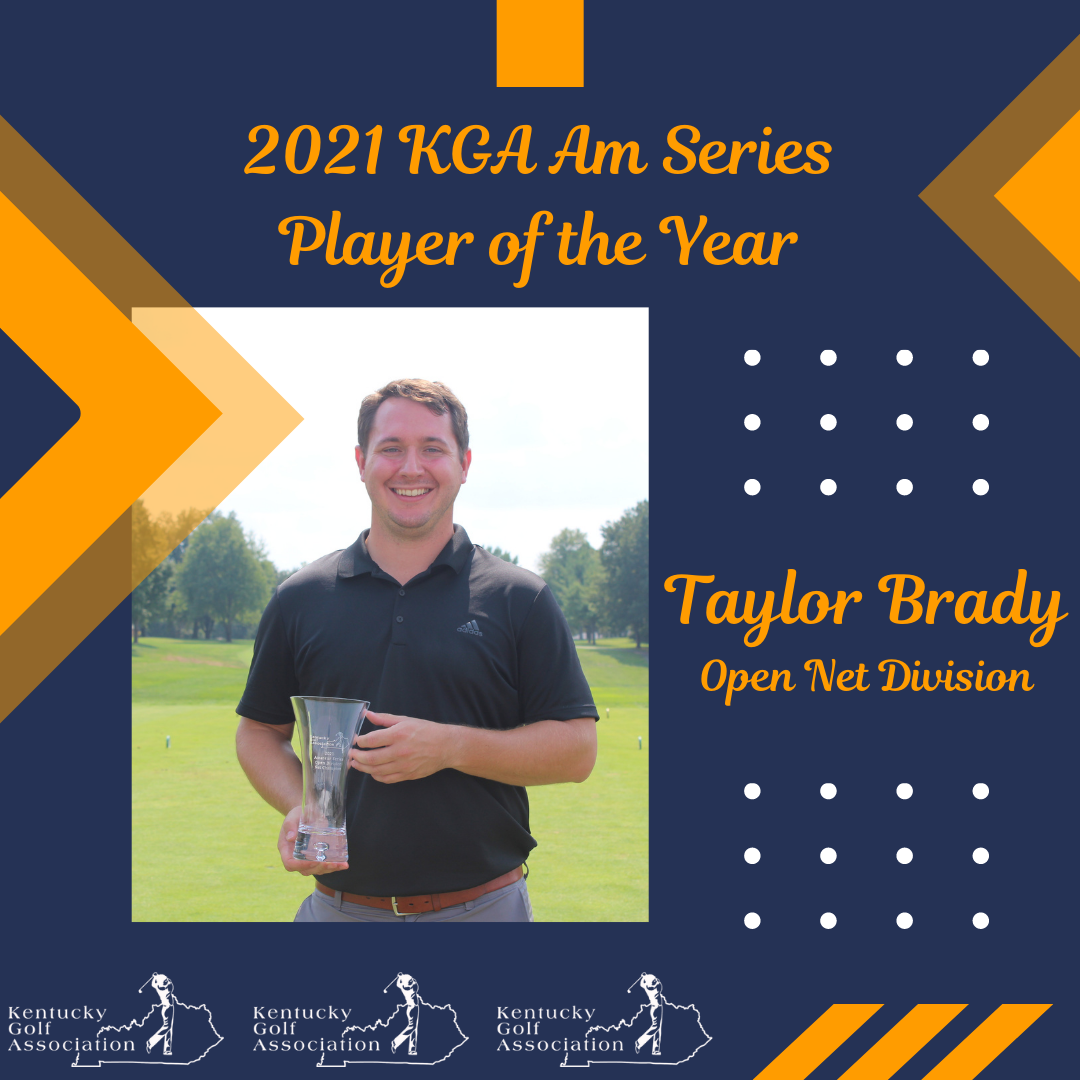 Taylor Brady finished runner-up to Bowlin in the Gross standings, but Brady did finish on top of the Open Net’s race. Brady made four Am Series starts in 2021 with three of those resulting in net top-five finishes, including a victory at Oxmoor Country Club. The Fort Thomas resident wound up nine points in front of Nick Rodgers once the standings were official, sealing a terrific Am Series campaign for Brady in both the Net and Gross categories. 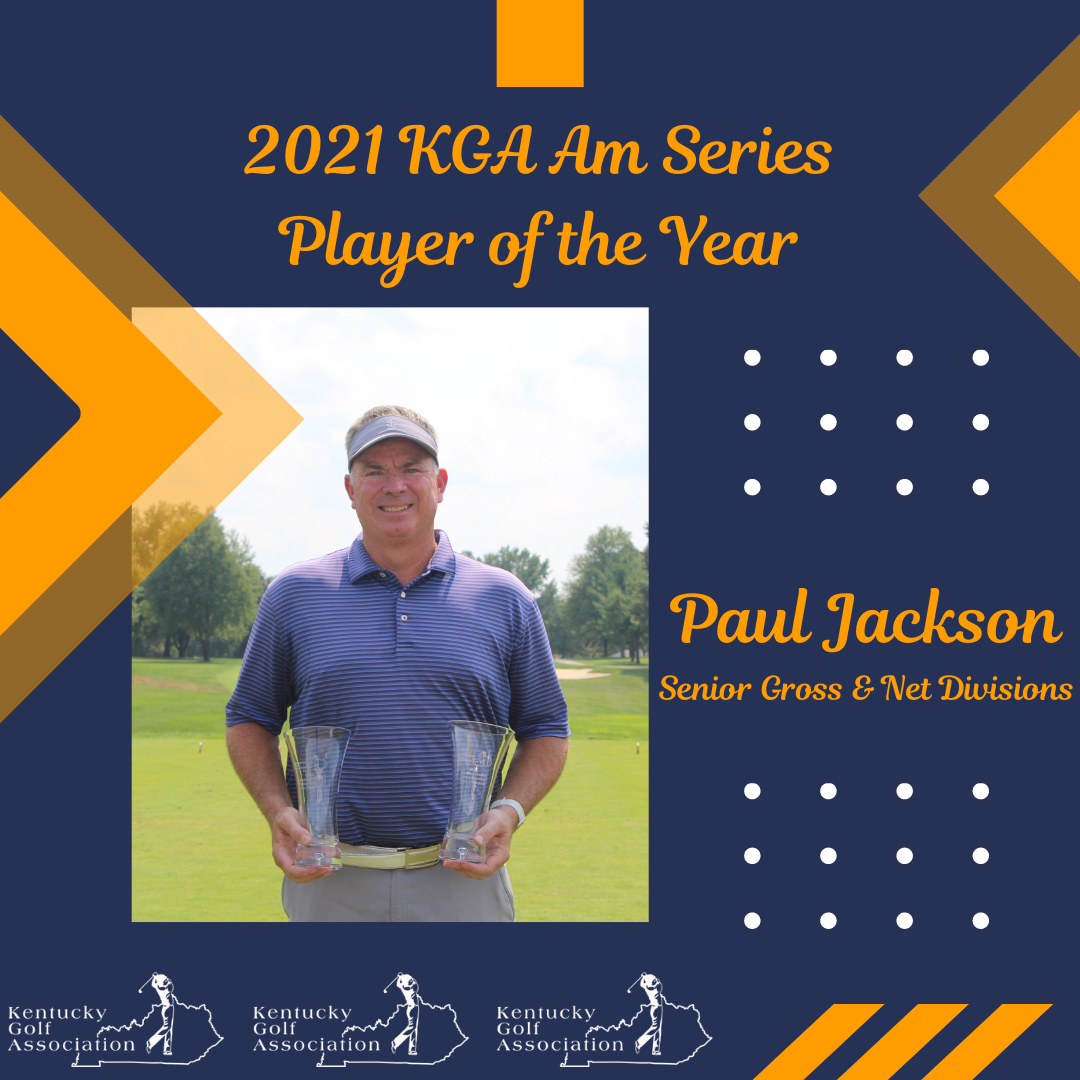 Paul Jackson was the only player to sweep an entire age group, as he won both the Senior Gross and Senior Net Divisions. Jackson competed in all six Am Series events and turned in solid appearances in each outing. On the Gross end, he finished in the top-five all but one time while his Net results featured all but one top-ten. As a result, he waltzed to comfortable titles on each side, winning the Gross title by eighteen points and the Net title by thirteen.

“I am absolutely thrilled to win the Am Series Player of the Year awards considering the level of competition in the events,” Jackson stated. “What a great group of players; they can flat out play! I was very fortunate just to play consistent golf in each event and with the Am Series points system, you get rewarded for that. The first five events consisted of five unique courses and set-ups, culminating with the Championship at Hunting Creek, which is a strong test of golf for sure. I want to thank the KGA for all of the hard work they put into the Am Series as well as all of the great players I had the opportunity to play with.” 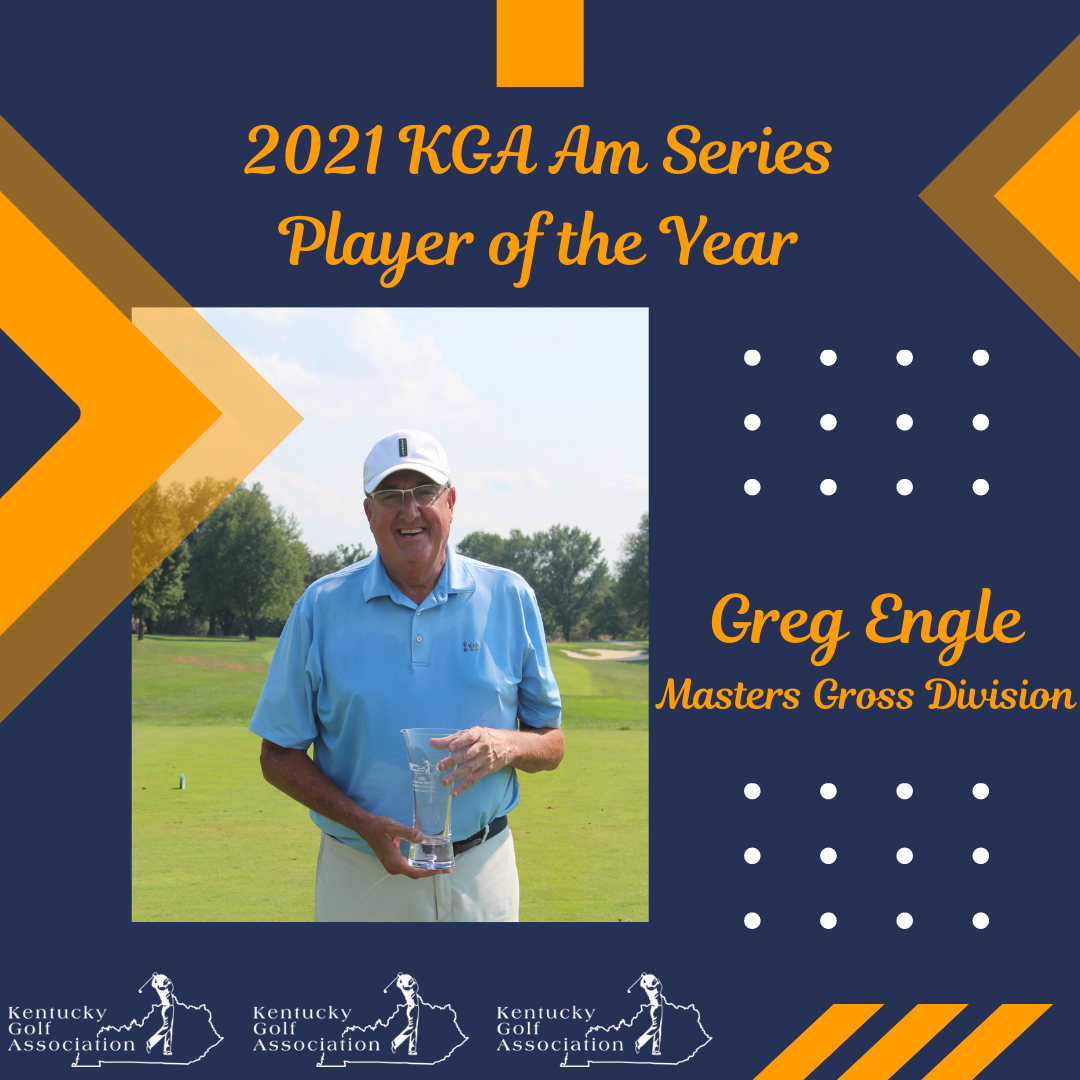 Greg Engle topped the Masters Gross Division, one year after winning the KGA’s Dale Barnstable Award as best player between the ages of 60-69. Engle’s quality play continued this year in and outside of the Am Series, with five Am Series starts that all amounted to top-five finishes. He won Oxmoor Country Club’s event in May to highlight his run of play, but consistent efforts across the board gave him a four-point edge in securing his latest honor as one of the state’s top amateurs.

“My highlight of this year in the Am Series was definitely at Oxmoor,” Engle recalled. “I got it going pretty good on the front nine with a bogey-free 32 (-4) on that side. Getting the chance to play with KGA President Jim Thompson was very memorable too. But any time you get an award, you’ve done something well. It keeps me motivated to continue working hard and strive to accomplish more.” 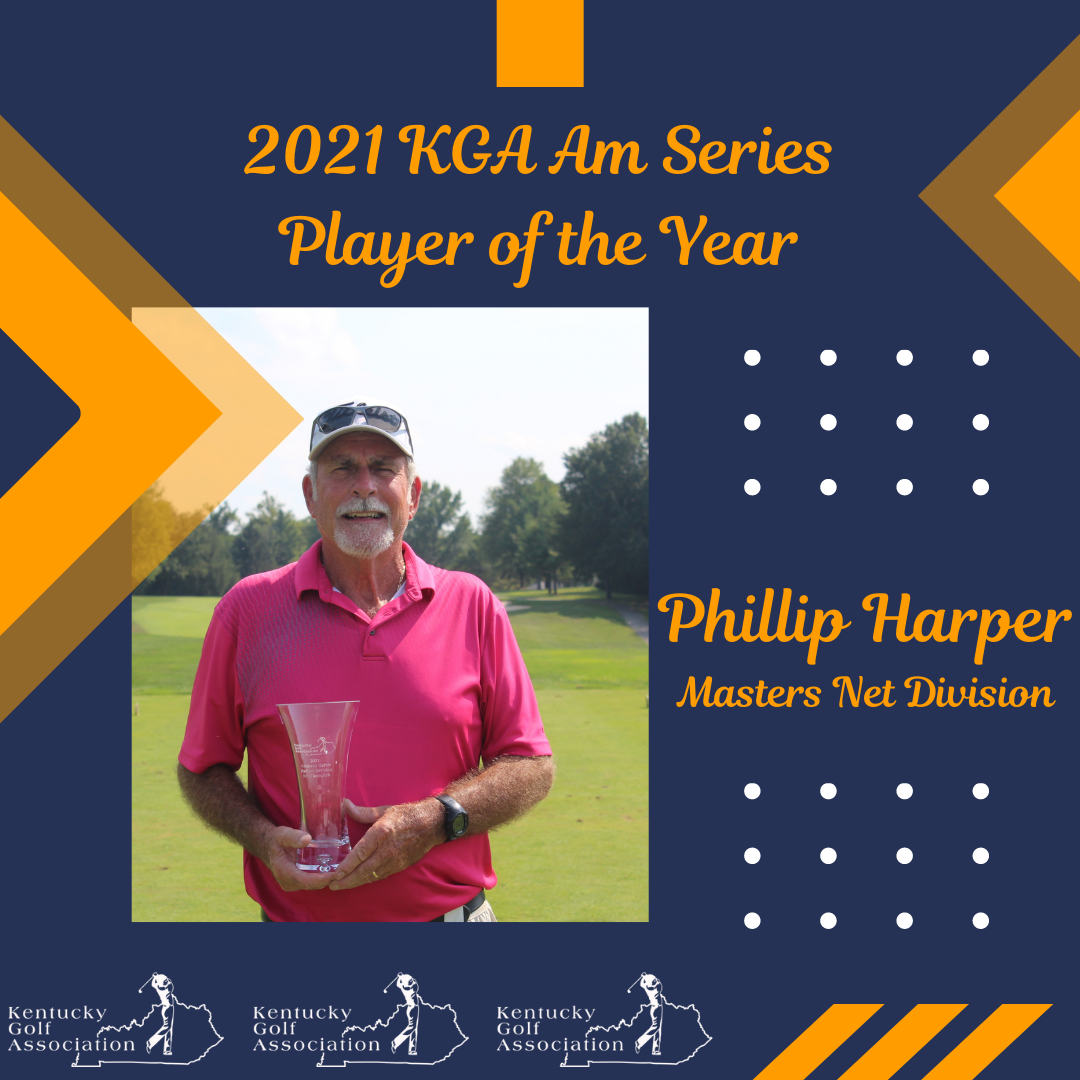 Phillip Harper finished runner-up to Engle in the Gross realm, but Harper did lock down the Masters Net Division’s title. Harper made five starts in Am Series events as well, earning two victories at Pendleton Hills and in the Am Series Championship at Hunting Creek Country Club. Harper had a net score of 68 (-4) in the season finale and with that event’s points doubled, it assured Harper of the title. 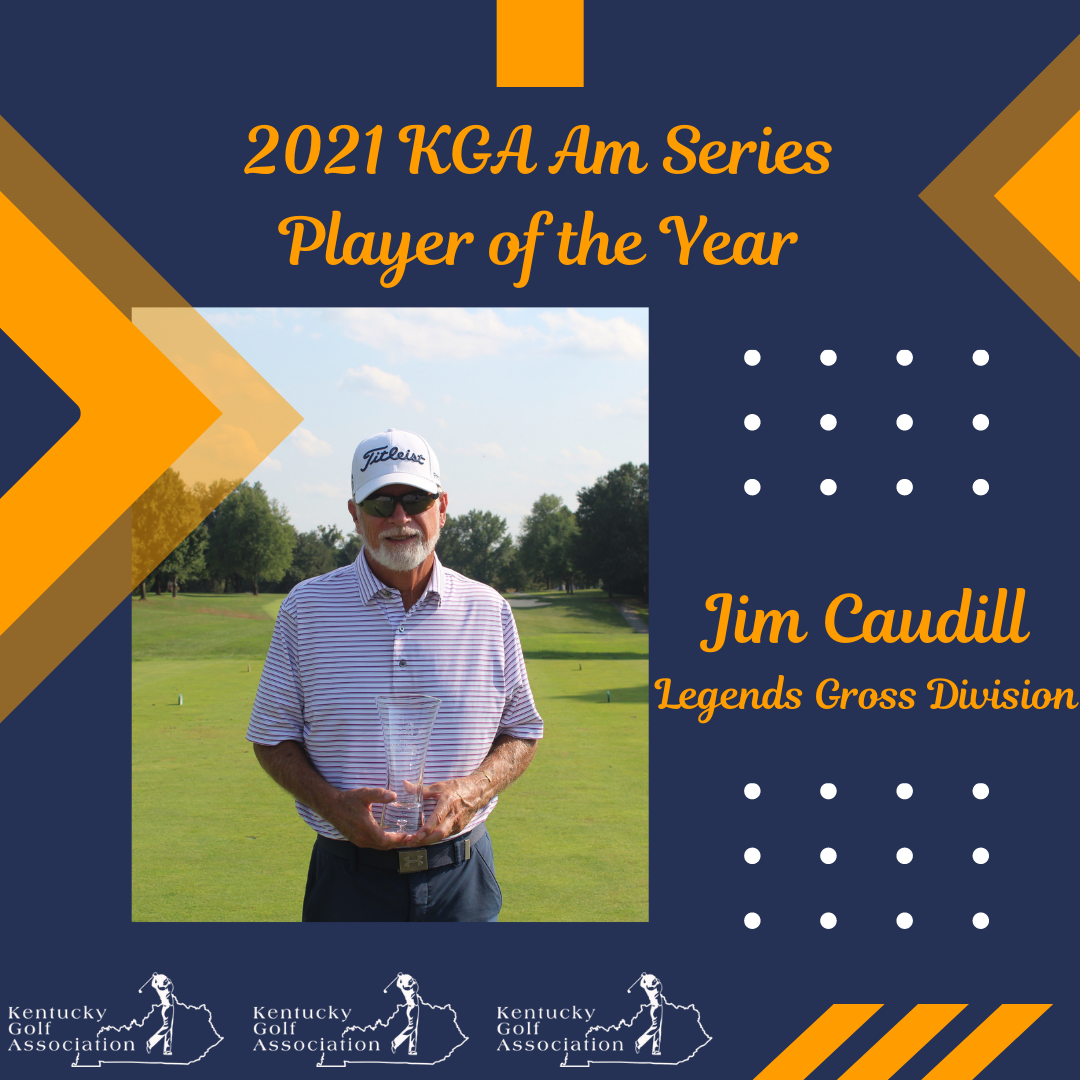 Jim Caudill played in all six Am Series events and won one-third of the time, helping him get the Legends Gross Division prize by a comfortable margin. Caudill’s two victories came at Pendleton Hills and Frankfort Country Club, but his steady run throughout the year had him in the top-six on the leaderboard each time out.

“I have enjoyed playing in the KGA Am Series events over the past few years,” Caudill discussed. “These events give golfers of all ages the chance to compete on many great courses around the state. I’ve enjoyed renewing old friendships and making many new ones. It is always a goal of mine at the start of the year to try and compete for Am Series Player of the Year. I am proud and honored to have played well enough to have accomplished this goal. I want to thank all those at the host clubs around the state and Golf House Kentucky’s team for making this a great year.” 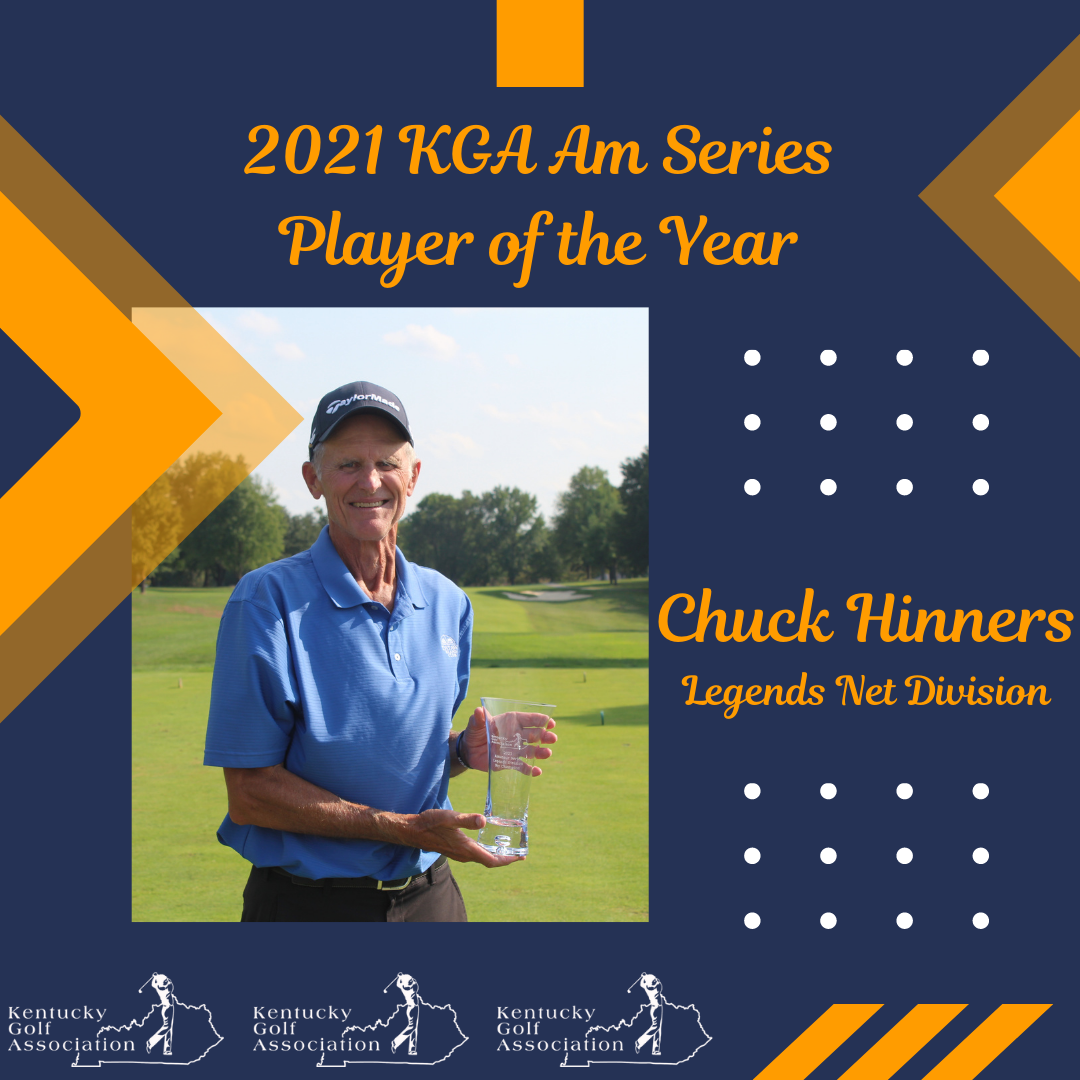 Rounding out the 2021 Am Series Players of the Year is Chuck Hinners who claimed the Legends Net Division. Of his five Am Series starts this year, he won two times at Winchester Country Club and Hunting Creek Country Club. Third-place and fourth-place finishes at Frankfort Country Club and Oxmoor Country Club, respectively, solidified a seven-point margin of victory for this prize over Caudill.

“The reason I play golf and specifically competitive golf is because of the people you meet and how you become great friends with them,” Hinners explained. “That’s what it’s all about. Life is all about memories and you want to make memories like this for you to look back on. I’ve played a lot of tournaments in the other states I’ve lived in and the KGA has a very well put-together mechanism here with its tournament program, including the Am Series. We’re fortunate to have the well-oiled machine that we have in Kentucky to enjoy opportunities like these events.”

“I want to congratulate each of these players and thank everyone who participated in this year’s Am Series events,” Jim Thompson, President of the Kentucky Golf Association said. “Additionally, I want to thank Brad Martin, our Director, Amateur Competitions and the entire team at Golf House Kentucky for making this slate of events a true success this year.”

The KGA’s 2021 season will conclude in October with the KGA Invitational, Two-Person Scramble and the Challenge Cup. The KGA Invitational and Two-Person Scramble take place at Indian Hills Country Club and Lexington Country Club, respectively. Registration for each of those tournaments is open and can be completed by clicking on the links above. The Challenge Cup will feature a dozen of the state’s top amateurs in an invitation-only competition against twelve of Kentucky’s top professionals.