One Bearded Golfer: More Than Just a Golf Blog 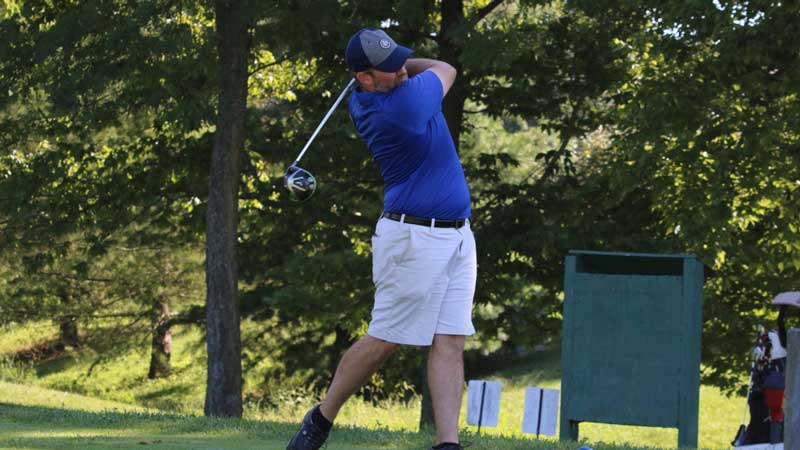 When Lexington’s David Hill graduated high school in 1997, it signaled the end of an era on the baseball diamond. Unsure of where his life in sports would proceed from there, it was around that same time Tiger Woods won The Masters by a record of twelve shots and revolutionized the sport.

And after developing a passion for golf, Hill did something really cool himself. He created the golf blog One Bearded Golfer, which has become a favorite amongst golfers in Kentucky and surrounding states. The site now represents the epitome of what a good golf blog can do; bring people together, encourage discussion about the game and foster a learning environment.

The journey to get to this point started when Hill learned the game at the now defunct Maplehurst Golf Course in Shepherdsville. College introduced him to golf courses in Lexington, and a job at Quail Chase Golf Course in Louisville got him playing as much as he possibly could. As he continued to expand the courses he played in Kentucky and other states, the idea for One Bearded Golfer began to take shape.

“I didn’t want to just take pictures of the courses I was playing and build a scrapbook, but I also didn’t want to be the 2,000th person to write a review on my experience at Harbour Town Golf Links. So I just started producing my thoughts and opinions to go along with the photos I took. I was inspired by Golf Kentucky Links to get out of my comfort zone and play as many new courses as I could. To try to be distinguishable from your average course review, I would say things like “Be prepared to bring more golf balls than usual” or “Bring extra money to spend on something in the clubhouse” that would give people something different aside from talk about the conditioning or difficulty of the course.”

The site was launched in December 2013, and after word of mouth spread shortly thereafter, One Bearded Golfer has more than 2,000 followers on Twitter and attracts many golfers to read, learn and debate.

“I want this to be about the everyday golfer. I never talk about professional golf since there’s not much of a point with multiple credentialed people being out there each week covering everything. So this site comes back to the weekend golfer or average amateur. By blending life together with golf it becomes relatable to everybody and just creates entertainment.”

As for Hill’s goals for One Bearded Golfer, the mission is simple. Bring people together, much like the game itself can.

“I want to bring someone new to the site because they’re interested in something. Hopefully they’ll smile, then they’ll look around and read something else. If they like it enough, maybe they’ll leave a comment or tweet at me and foster some conversation. Part of why I love golf is because it’s the only sport you can play and have a legitimate conversation with somebody. My goal for the year is to play golf with five new people for that very reason so I can learn more about them and have new conversations. I want the website to be that same way.”

Hill considers the Kentucky market in terms of its golf scene to be on the rise. With an annual PGA Tour stop in the Barbasol Championship, a major championship coming to Kentucky about once a decade, stars on the PGA Tour like Justin Thomas and J.B Holmes, and the investment to do more to bring more young people into golf, Hill is encouraged.

“As a father of two, I’ve noticed a renaissance towards junior golfers which is great to see. I think Youth on Course is great. That’s probably as good a way as there is to introduce kids to golf and get them interested. Other things Golf House Kentucky does like the Amateur Series is a great way to get adults involved.”

Hill’s time on the Amateur Series came about because he wanted to play courses he usually wouldn’t get the chance to. His very first one at Olde Stone was just for that reason since Hill wanted to play it but didn’t have another means of doing so. When he realized his game wasn’t where some of his counterparts’ games were, he took it upon himself to get better as the competitive itch grew.

“I love that there’s both net and open competitions. The best of the best can duke it out traditionally, while at the same time being able to compete against guys from a handicap perspective is a lot of fun, so you always feel like you’re playing for something while having fun at the same time.

Hill states that the Amateur Series is perfect for folks who don’t necessarily want to spend their free time away from families, but also wanting a taste of competitive golf and play courses that perhaps aren’t on their usual rotation.

“The series has evolved from weekend hacks to guys who used to play on their high school teams or have played in other local competitions. We play on weekdays so you don’t have to sacrifice a weekend with your family to play in an event, and you get to visit golf courses all over Kentucky. They’re a blast to play in and great for the casual golfer to get involved with.”

While Kentucky golfers continue to get involved with the game and watch either its star natives or the best in the world come to its courses, there’s plenty about golf in Kentucky that Hill thinks is underappreciated and deserves recognition.

“There are so many diverse, great golf courses you can play here. Kentucky may not have many destination locations for golfers, but there’s such a variety of venues that can be played from mountain courses to delta courses. We have outstanding state park courses and phenomenal land for solid courses. We can play here year-round as well; there’s at least one day each month where you’ll be able to tee it up. It’s a great state for golf and we’re fortunate to have some tremendous courses to enjoy.”