John Allison: Roamer of the Fairways and Friendly Skies

There is no enemy of John Allison greater than inclement weather. When you spend your career as a pilot before becoming a rules official, there are no two professions that can be impacted by inclement weather quite like those. But more than three decades in the skies and half a dozen years as a rules official for Golf House Kentucky hasn’t deterred Allison from mother nature’s path yet and it doesn’t seem to be scaring him off anytime soon.

The son of an Air Force medic, Allison was born in Fort Campbell and bounced around during the early part of his childhood. At age two, he and his family crossed the pond and were based out of Germany before coming back to the States when Allison was five. They were in Chicago upon their return which is where Allison found himself up through college. While in Chicago, his father became a manager for United Airlines after his time with the Air Force concluded. A perk of the job meant the Allison family could often fly for free, and the sum of being a passenger on many flights plus his dad’s attachment to flying led John to pursue the career of being a pilot himself.

There was no objection to that from his father, but he did see to it that John would get a four-year college degree. An important note because at this point in time, studying to become a pilot did not yield a full four-year college degree. Aviation maintenance, which did offer a four-year degree, ended up being Allison’s major at Lewis University in Romeoville, Illinois. Allison spent time working as an aircraft mechanic which netted the ability for Allison to fund his flying lessons.

After acquiring the necessary pilot ratings and building flying time as a flight instructor, Allison was hired by Air Illinois where he flew small-scale airplanes across the Midwest for several years. His first big break came in 1984 when he applied for a position with Orion Air. At this point, UPS was contracting the pilots and mechanics of their brand-new aircraft fleet from other airlines, of which Orion was one. It wasn’t until 1988 when Big Brown started hiring their own pilots and mechanics which led them straight to the folks they had been contracting previously. Allison got the call to become an official UPS pilot and stayed with them through 2014 when he called it a career and retired. Thankfully, Allison never encountered any major emergencies during his years as a pilot. His most “stressful” situation he encountered did not phase him or lead to any sort of problem. 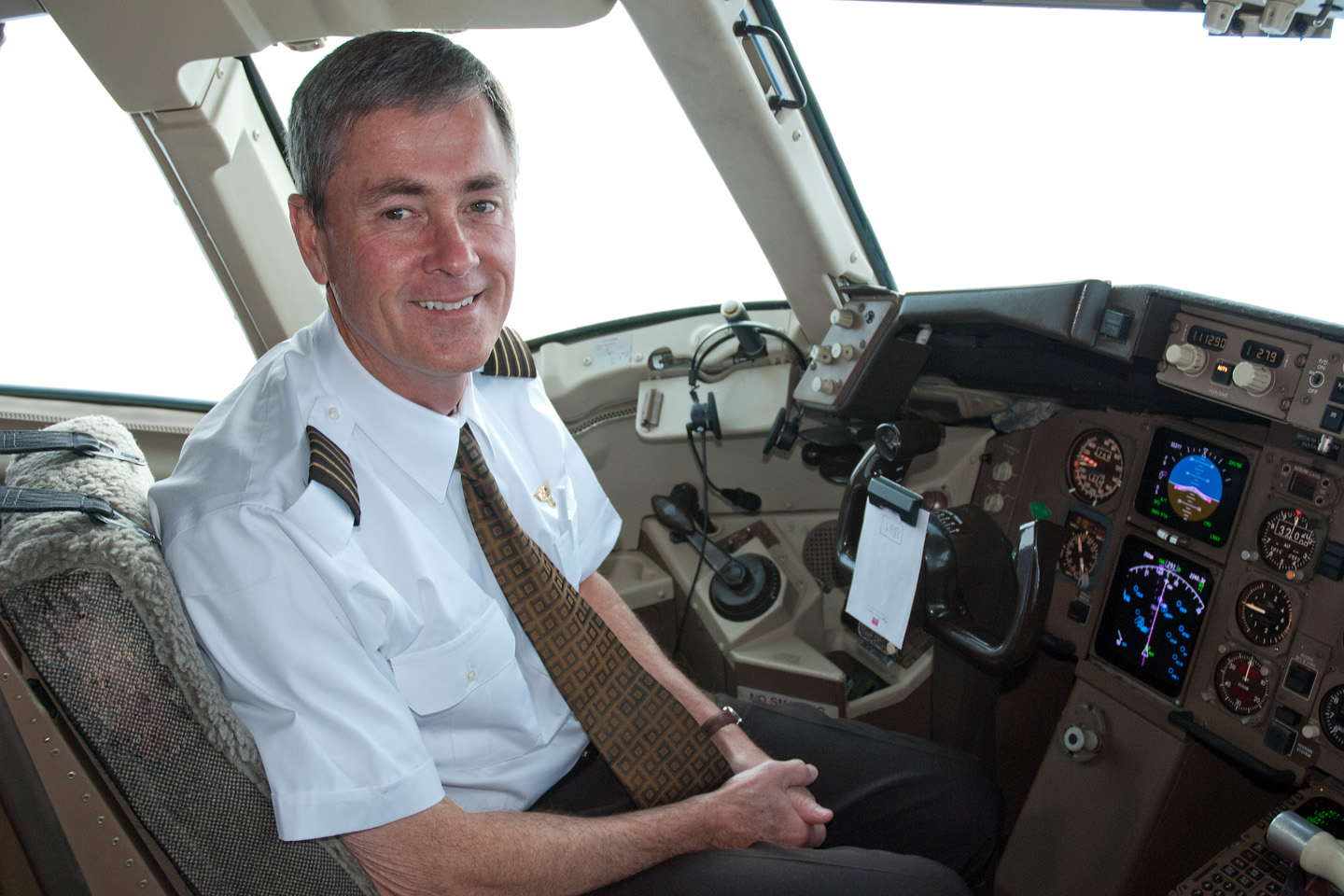 Allison from the cockpit during his days with UPS.

“I was flying out of Houston one night and an engine lost oil pressure just after takeoff,” Allison recalled. “The procedure is to just go ahead and shut it down immediately, because eventually it’s going to happen either way. I declared an emergency landing, circled back to Houston and landed on only one engine. The approach and landing had my full attention, but we landed safely without any issues.”

A two-stroke penalty after a rules violation doesn’t seem nearly as stressful when pegged up against that. In leading to his status as one of the most respected rules officials in the state now, he got the hook through his father, who once again rubbed off on him. Allison picked up the game late in high school and played golf as much as he possibly could throughout college and during his pilot training. While most folks are used to seeing him on the golf course providing rulings, Allison has always been an avid golfer. When Lake Forest Country Club was being built by Arnold Palmer’s team, Allison became the club’s tenth member in 1990, which occurred well before the golf course opened for play. As far as the rules, Allison stumbled upon the Decisions of Golf one day and didn’t find it intimidating or dull like many golfers seem to. He dove right in.

“I’ve always been a nerd of sorts, I suppose. About thirteen years ago I started reading the Decisions book and couldn’t really stop. I found it very interesting and enjoyable. Before long I had read the entire thing. Somehow or another, I found out about the USGA’s Rules of Golf workshops and the opportunity to take the same exam their staff does if you just pay the fee. So, in 2008 I went to a workshop which was co-taught by Mike Davis, the outgoing CEO of the USGA. During the workshop I just got fascinated by it all. I studied my butt off for the exam, partially because I really enjoyed it. I scored a 75 and I thought that was terrible. It made me want to come back and keep trying, so I’ve done a workshop every year since with the exception of 2018 since the rules were about to be overhauled the next year.”

Allison’s passion for the Rules of Golf and the desire to learn as much as he possibly can about them has led to him becoming a certified expert within the USGA. He has scored a 98 and 99 on the rules exams, missing a perfect score by just one wrong answer on the latter try. The objective is to eventually score 100, but the primary goal for Allison is to use that knowledge to help the competitors of Golf House Kentucky’s tournaments.

“There’s a big difference between taking a rules exam and actually applying the rules on the golf course. You’re constantly collecting info while you’re at a tournament from a lot of different people. Some people can take the exam and get a great score but not be able to apply it properly during a ruling, other folks may not score well on the exam, but they can easily make the correct ruling at a tournament. I think I’ve reached a point where I’m able to do both which is truly easier said than done.”

“I’ve always enjoyed helping people and I really like being out there to help people enjoy the game more. Junior tournaments especially, because those players will be competing for years and anytime I can help them teach something that’ll apply down the road, I love that. Maybe ten years from now one of them will be in contention at a big tournament, have something come up and they can go ‘Hey, that one guy once told me I have to do this or I can’t do that.’ That means a lot to me. The average golfer I’d estimate probably only knows about 20% of the rulebook, so I’ve always hoped I can help build on that.” 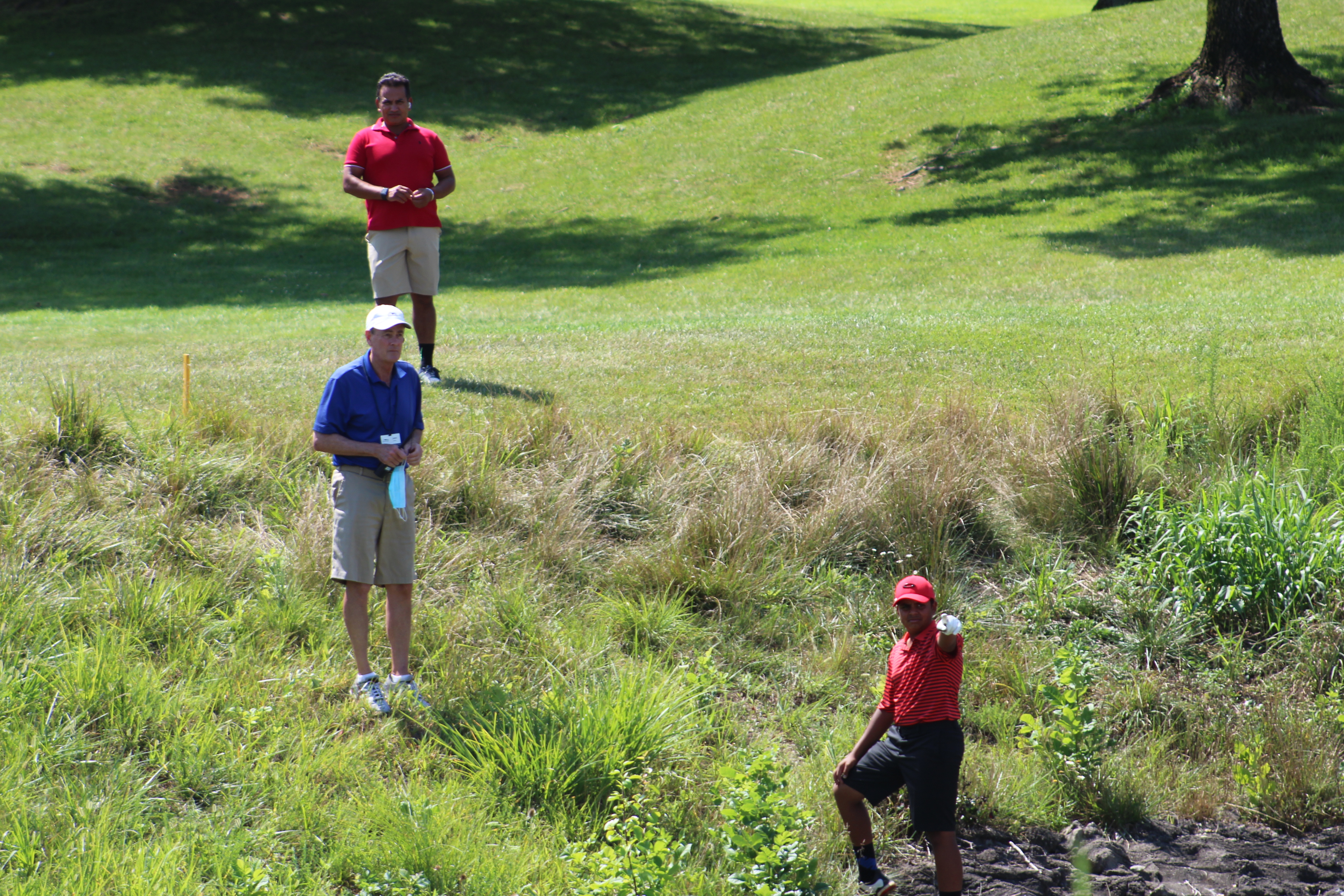 Allison assists a junior golfer with a ruling during the 2020 season.

When asked if a ruling has ever come up that was overly complex or played a key role in factoring into the tournament’s outcome, Allison was unable to immediately recall anything. He did, however, remember one of his first junior tournaments that outlined the importance a rules official has and how critical the official’s knowledge or judgement can be.

“A young man hit his ball into a penalty area, he did something he shouldn’t have, and I had to give him a two-stroke penalty. Ultimately, he lost the tournament by a shot and he was certainly disappointed. That impressed on me that you must be absolutely sure of what you’re doing because these events mean a lot to the people involved. It is always much better to risk sounding stupid by asking what might seem like a dumb question on the radio than by handing out an incorrect ruling.”

As it was for every golfer, the 2019 changes that took effect in the rulebook created a learning curve for Allison. Two years into it though, Allison gave a glowing review of what the USGA and R&A’s changes have done for the game. While not perfect and some ironing out still needs to be completed, in Allison’s opinion, the overall goal of simplifying the rules and making them more friendly to the player is well on the way to being accomplished.

“A lot of penalties before the changes didn’t necessarily make the game unfair but were certainly unfriendly. To give an example, a ball accidentally being moved during a search. As an old rules purist, I wouldn’t say that rule was bad or needed to be changed. It is a good example moving forward though of trying to limit “accidents” from becoming penalties, which I am all for. Now, I will say that it’s become evident some rules need to be tweaked or revisited because scenarios have made it clear they don’t work when applied. But overall, I like the changes and I think most players are too now that they’ve gotten more used to them.”

Allison also discussed the big topic of conversation right now in the golf world, what to do (or not to do) about the ever-growing driving distances in the game in light of what Bryson DeChambeau has done this year. Allison is among the many golfers waiting eagerly to hear about the Distance Insights Report from golf’s governing bodies, but at this point, he believes something should be instituted to dial back distances.

“My knee jerk reaction as someone who’s old-fashioned and a traditionalist is that distance needs to be rolled back a bit. Everybody who hits it far will still have an advantage if something is eventually done, but the way the game is being played now is not meant for how golf courses were designed. Design intent is becoming increasingly irrelevant with how the best players in the world play tournament courses. I’m not sold on bifurcation at this point, but as an older person and a purist, it is somewhat unsettling par-four holes continue to get lengthened when the pros still hit driver-wedge more often than not. The average golfer won’t be able to keep up with that. There isn’t an easy answer out there, but I personally would rather not have 8,000-yard golf courses become the norm.”

Allison is very content with where he is and the work he does with the organization. He estimates 60% of the tournaments he works are junior events, but his expert status and reputation make him a common presence at the state’s biggest championships for juniors, amateur adults and professionals. The possibility of officiating some AJGA tournaments or one of the USGA’s amateur championships could come about in the future, but Allison loves being a rules official for the organization and providing his service to all types of golfers. 2020 marked Allison’s sixth season with Golf House Kentucky and he has no plans on going anywhere anytime soon and hopes other people with an interest in becoming a rules official gets in contact with the organization’s staff.

“What scared me at first about becoming a rules official was the fear of being totally lost and confused during a situation, but it just doesn’t happen. 99% of rulings you come across are cut and dry and when the 1% situation comes around, you just ask someone on the radio. The professionalism of everyone at Golf House Kentucky is so impressive. I was worried it might be too tough, but the staff and officials take great pride in delivering the best event possible.”

John Allison certainly factors into that equation and he is a blessing for the organization to have. A golfer being assessed a penalty from Allison down the road may not see it that way in the moment, but his mission of educating the golfer and adding to enjoyment of the sport cannot be questioned. Thanks in large part to Cathy, his wife of 39 years keeping him in line and providing the necessary support, Allison has enjoyed a successful and fruitful career, both in the air and on the ground.