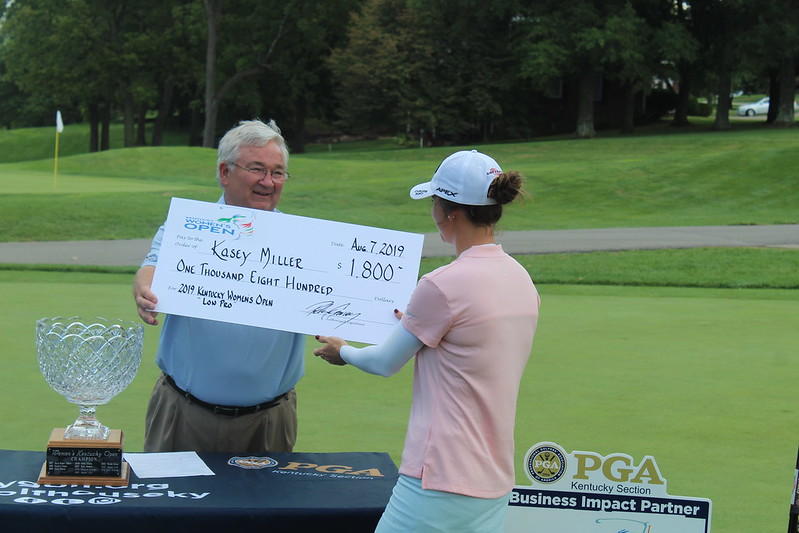 As part of Bill's retirement. in addition to this Deep Dive presented by Golf Pro Payments, Bill is also featured on the latest episode of Golf Pod Kentucky presented by Taylormade. That episode is now available on your favorite place to listen to podcasts.

The organization Coomer has spent the last 26 years with has changed considerably ever since his hiring. Friday, April 30, 2021 marks the final day of his incredible career with Golf House Kentucky. One in which he has overseen tournaments that golfers such as Justin Thomas, J.B. Holmes and Josh Teater competed in before reaching the PGA Tour. He estimates he has spent 2,500 days working golf tournaments, which includes USGA and PGA Tour qualifiers, USGA and PGA of America national championships, college tournaments, and so much more.

Before taking the Director, Amateur-Professional Competitions position, Coomer had been working as a Club Professional in the Nashville area during the early 1990s. What ultimately became his job first entered his radar late in 1994, and a few months later, he was hired by the late Mike Donahoe, who was the organization’s Executive Director from 1992-2001. The first few months for Coomer at Golf House Kentucky were hectic, as the tournament schedules for the KGA and KPGA for the 1995 season had not been made with tournaments needing to start as early as April 1.

“It was a sit down and start calling sort of thing,” Coomer recalled. “I didn’t know the personnel at the state’s facilities so it became a quick learning episode of what to do and what to ask for. I didn’t have a big support staff either. There was only one tournament chairperson and there were no tournament committees within the organization at this point. So schedules had to be confirmed, entry forms had to be made, player booklets needed to be compiled, all up until a spring meeting when at this point everything is in paper form that you need to distribute to folks in binders.”

He was able to pull it off and 1995 marked the first of what would end up being 26 tournament seasons where Coomer oversaw KGA and KPGA competitions. There was a window in time, however, late in 2001 where Coomer might have seen his position within the organization change. Donahoe resigned from his position as Executive Director which left the role vacant, and Coomer ended up being one of two finalists to be the next person to take the role. The position ended up going to Mark Hill instead, which Coomer says was the “right choice” given the direction the organization was heading.

“I thought it might be a good stepping stone for me, but Mark was working with Tennessee when their Golf House was being built. That’s the direction our Board of Directors in Kentucky was looking to go next with getting one of our own constructed, and Mark was the best person to lead that project. He knew how to allocate the resources properly and build what we have now, and that’s all because of Mark.”

At this point with Hill at the helm, the organization began to evolve into the state it’s in today. More Pro-Ams were added to the tournament schedule, the Kentucky Golf Foundation had more activities and events conducted to build its stature, a closer relationship with Valhalla Golf Club was forged leading to more GHK events being held there. Upon Hill’s departure for the USGA in late 2012, Steve McMillen, PGA was hired on which ushered modernization within Golf House Kentucky.

Beginning in 2013 during McMillen’s first year, business imperatives in today’s world were added to the fold including a more user-friendly website and a social media presence. The arrival of Brent Paladino, PGA in 2018 only added to that and continues today with Jeff Adkerson, PGA overseeing the organization.

While all these components changed, including how golfers register for tournaments, view schedules and follow progress of tournaments, one thing that did not change was Coomer’s dedication to his job and the golfers of Kentucky. Thousands of golfers have competed in tournaments that were led by Coomer. Along the way, as is the case for any Tournament Director, he has been forced to have difficult conversations with players. Disqualifications, penalty strokes, pace of play warnings, you name it. Coomer has had all of these but done so with class each time. His parting advice to golfers of Kentucky connects to those difficult situations and is worth heeding no matter how old or young you are, or what skill level your golf game falls under.

“It’s just a game,” he said. “Golf is not life or death. Don’t treat it like that, treat it like a game you want to spend a day enjoying. And let someone know who’s in this position in the future what can be done to make it even more enjoyable too.”

Because despite the fact 99.9% of comments and feedback directed towards Coomer ever since the announcement of his retirement last October have bene overwhelmingly positive and kind, there of course has been that 0.01% to express some sort of distaste for Coomer because of various reasons that hold no weight whatsoever beyond the confines of a golf course. While unfortunate, it has been extremely clear throughout his quarter-century tenure that Coomer has handled each situation he’s encountered with grace, kindness and genuineness.

Golf tournaments in Kentucky will carry on and Golf House Kentucky will continue to operate, but the lack of Coomer’s presence will certainly be strange. Golfers have already commented during this first month of the 2021 season how strange it is to not see Coomer on site. But fear not, because Coomer’s retirement does not mean he is disappearing entirely. He will be a rules official at several tournaments in 2021, including Golf House Kentucky Classic #2 at Persimmon Ridge Golf Club, the Kentucky Senior Team Championship at the University Club at Arlington and the 102nd Kentucky Open at Persimmon Ridge, just to name a few.

His departure from a full-time staff position does still signal the end of an era at Golf House Kentucky though. Along with Barbara Peak, the organization’s Director, Finance-Administration, Coomer and Peak represent a timestamp at Golf House Kentucky that few other businesses in any industry can boast. Two employees spending a quarter-century at one workplace is becoming rarer by the day, and Coomer has been one of the best since that first day in January 1995.

In the time since, the world, let alone Golf House Kentucky, has changed immensely. The fact that this organization was fortunate enough to have Coomer for that entire stretch of time is a blessing beyond measure. Now, he gets to take a deserved step back and enjoy a much-deserved retirement with his wife, Sharon. There will always be only one Bill Coomer, and Kentucky golf will not be the same without him.

On behalf of every golfer in the Commonwealth, thank you, Bill.