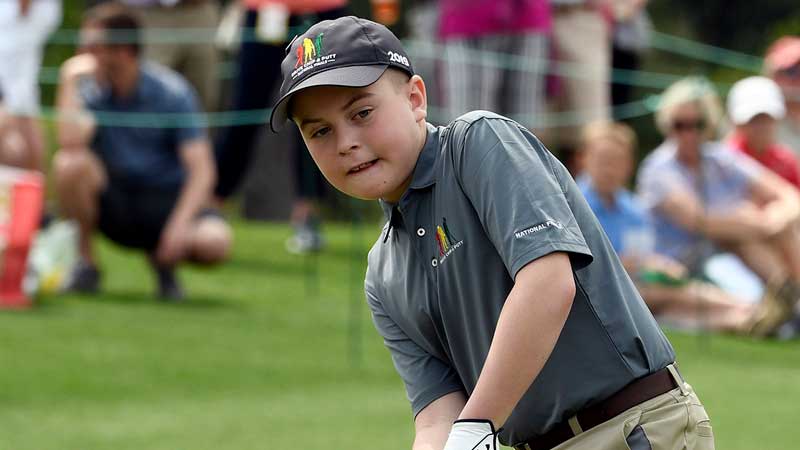 In April, a nine-year old from Mount Vernon pulled off one of the most significant moments in Kentucky golf history. That may seem like an exaggeration to some, but Conner Ford’s national championship in the Boys 7-9 Division of Drive Chip & Putt at Augusta National Golf Club will forever go down as a poignant moment for junior golf in Kentucky. Of the eight champions who won at Augusta National that day, many of them are from cities that the nationwide golfing audience would typically expect, such as Atlanta, Houston and New York City. The small-town boy from central Kentucky, however, quickly established himself as one of the best players there across all age divisions and was rewarded with his Boys 7-9 Division crown.

“I expected to win,” Conner said with a laugh. His father John felt confident that Conner would win the drive portion of the division considering the strength of his game off the tee, but the overall prize was a wonderful bonus.

“I figured the drive competition was going to give him a good shot at winning the whole thing,” John exclaimed. “I told Angie (Conner’s mother) after he hit his first drive, ‘You know, today’s a good day, and if nothing else, he’s going to win the drive.’ When he hit his 30-foot putt though, that was kind of the moment where I realized ‘He’s going to do this and win it all.’ Along with my wedding day and the birth of my children, it’s the greatest day of my life.”

The nerves and excitement about being on a national stage at Augusta certainly ratcheted up for the whole Ford family. So much for John that he barely remembers the event. For Conner, his butterflies were settled when he warmed up on the practice range with one of his golfing idols, former Masters champion Fred Couples.

“I was definitely more nervous than usual,” Conner described. Seeing Freddy and meeting him helped calm me down.” Along with Couples, Conner got to introduce himself to other famous figures like Justin Thomas, Sergio Garcia, Condoleezza Rice, Annika Sorenstam, Lorena Ochoa, and Peter Jacobson. Two-time Masters winner Bernhard Langer presented Conner the trophy, Augusta National Golf Club’s Chairman Fred Ridley congratulated him and Golf Channel’s Charlie Rymer became a favorite of Conner’s during his post-competition interview.

2018-19 was Conner’s third season in Drive Chip & Putt. Now that he’s a nationwide champion, Conner said with a grin that he expects to win it every year from now on. The challenge will begin to get tougher this year when he competes in the Boys 10-11 Division, but his confidence to handle it is unmatched. His favorite part of golf is hitting his driver and his father sees it as the biggest strength of his game, but Conner advises other junior golfers to not get too focused on one part of the game if they want to reach Augusta too.

“Keeping up practice is the most important thing to be successful,” Conner said. “All parts of the game have the same amount of importance.” John added that finding a PGA Professional to teach a child is a step every parent should take, so long as the child has a natural love for the game. As John described, he taught Conner everything he knew once Conner demonstrated an interest in golf, then got a PGA Professional to build off that and get Conner to a different level. The PGA Professional that became Conner’s coach is Brad Bachand, PGA Director of Instruction at Man O’ War Golf in Lexington. His role has expanded to the point where Brad is also caddying for Conner when his schedule allows at events on the Kentucky PGA Junior Tour. John also preached the importance of parents allowing their kids to play in other sports. In addition to golf, Conner quarterbacks his football team, pitches for his baseball team and is the shooting guard for his basketball team. Consequently, Conner consistently has different things to do and avoids being bogged down by just one sport. 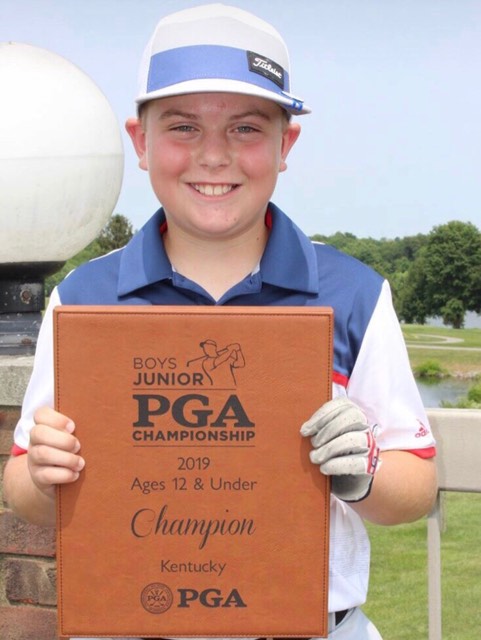 The list of people that have impacted Conner continues further through Todd McDaniel. A former golfer for the University of Kentucky, Todd also loops for Conner in Kentucky PGA Junior Tour events from time to time and is someone Conner looks at as a big brother. Todd’s mentorship has been instrumental to Conner’s development, as has Mike Thomas. The father of 2017 PGA Champion Justin Thomas has been giving Conner short game lessons for the last year and a key figure in why Conner’s short game has become one of the best across junior golfers in America. Chip McDaniel, who recently qualified for the US Open, is also someone Conner looks up to for inspiration. Chip grew up in Clay County which only contains a nine-hole course and has now reached one of golf’s major championships, something that Conner has taken notice of.

Conner’s ascent to the top of the junior golf mountain would not be possible without his home course in Mount Vernon, Cedar Rapids Country Club. John praised the nine-hole course located a short drive west of I-75 for the accessibility they have provided in allowing Conner to develop his golf game there. Gibson Bay Golf Course has also allowed the Fords the opportunity to utilize their golf course, which translates to a championship golf course further growing Conner’s golfing skills. Both courses’ hospitality are unsung heroes when it comes to Conner reaching the points he has, due to the automatic disadvantage a rural spot like Mount Vernon has when it comes to producing champions that the United States’ biggest cities can do more easily.

Going forward, Conner has high standards for himself after the success he achieved in Augusta. Playing on the PGA Tour is Conner’s primary goal and he wants to be the first person to win a Drive Chip & Putt title along with The Masters at Augusta National.

“Augusta is the most amazing course I’ve ever seen,” Conner described. “It was way nicer than I pictured it being. So if I could only win one tournament as a pro, I definitely want it to be The Masters.”

“Conner tells me when I’m over the top with my swing,” John said. “He’s also started giving his younger brother Cooper and younger sister Ella tips to each of them, so Conner knows what he’s talking about, that’s for sure.”

Beyond the long-ranging impacts golf has had on Conner, the immediate impact of winning at Augusta National was filled with added bonuses.

“Olive Garden sent a gift pack to us since Conner mentioned them during his interview, golf courses across Kentucky have sent us gift cards inviting us to come play, Conner gets recognized by people when we go out to eat or get paired with people on the golf course, so we’ve been fortunate to experience a little local notoriety,” John described.

People across Kentucky and the United States have taken notice to Conner for good reason. His golf game and personality have gained him a legion of fans before his 10th birthday, with much more still to be achieved. Whether he emerges as the next Kentucky golfer to become a star on the PGA Tour is something we’ll find out more than a decade from now, but there is no doubt he has already secured a spot secured as one of Kentucky’s most significant figures in junior golf.