Two weeks ago, Fred Wirth became a bit of a golfing celebrity on Twitter. When the KGA Invitational took place at Audubon Country Club on November 9th, we tweeted about the 93-year old teeing it up in the competition.

Fred Wirth is 93 years old. He’s bombing drives and having a grand ole time amidst a field where some players hadn’t even been born when he turned 70.

Golf is the best. pic.twitter.com/u5swC4OZny

His presence there showcased one of the very best aspects of golf. That someone who was born nearly a century ago can play in the same competition as a person whose birthyear doesn’t predate 2000. It’s why, as was tweeted, golf is the best. That tweet was spotted by our friend Monday Q Info, who has a cult following amongst hardcore golf fans. He shared the news and many people took notice, including one of Kentucky’s PGA Tour players, Josh Teater.

Yesterday Fred Wirth shot 95 in the Masters division of KGA invitational in Kentucky. He never made more than double.

Awesome Fred! Hope I can still carve in 52 years! https://t.co/bmyiudl0Ms

“Every morning when I get up, I get my coffee warmed up and take my pills with four or five swallows of BOOST,” Wirth described. “Then I come over to the staircase and do 250 stretches with a bungee cord tied to a railing, with every 50 stretches being in a different position. I go shave and shower, then I do 200 reps on my bike upstairs. I don’t know if any of those things help me, but I know so many old people who struggle to get up. When I get like that, I’m gone!”

It’s a routine that would make Gary Player or Bryson DeChambeau proud. And speaking of Bryson, Fred has beaten him to the punch of using a 48-inch driver on the golf course – which is almost as tall as he is. 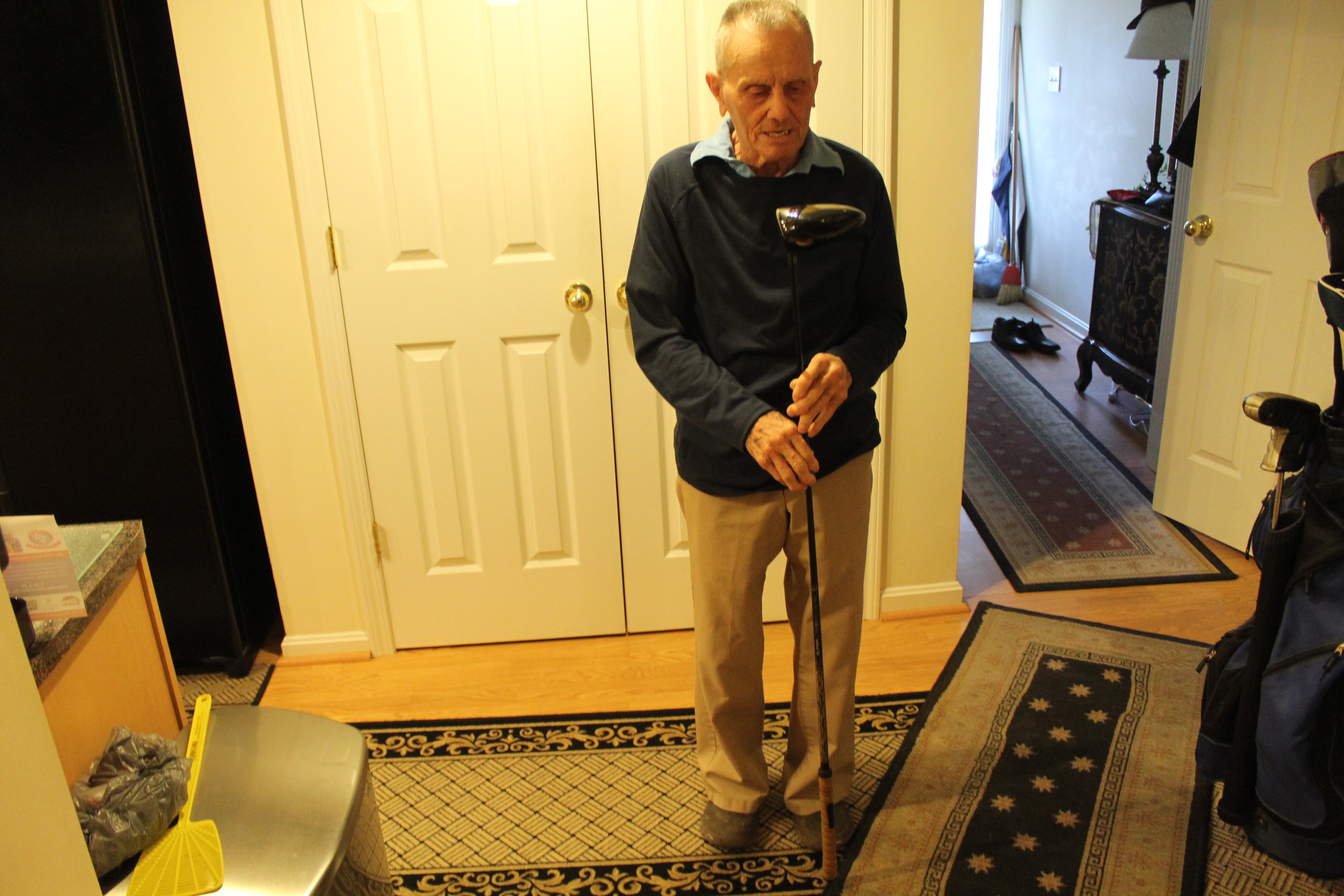 Fred has that club because he makes all his golf clubs in his house. Taking clubs that he’s acquired, Fred has modified the shafts and grips in each of them over the years to develop what is truly a custom set. He volunteers to re-grip clubs for other golfers as well, which is one of the ways he stays busy when the weather doesn’t permit for a round of golf.

But golf didn’t become part of Fred’s life until his mid-40s. The world of horse racing was his first love. His size is the prototype for that of a model jockey and he raced horses for many years. That led to him becoming a trainer, which is where Fred’s name became well-known to followers of the sport across the country. Perhaps Fred’s most well-known horse he oversaw is Mythical Ruler, who raced in the 1981 Kentucky Derby and finished 17th of the 21 horses who galloped around Churchill Downs that day. Mythical Ruler was ridden by Fred’s son Kevin in that race, who has had quite the athletic career himself. 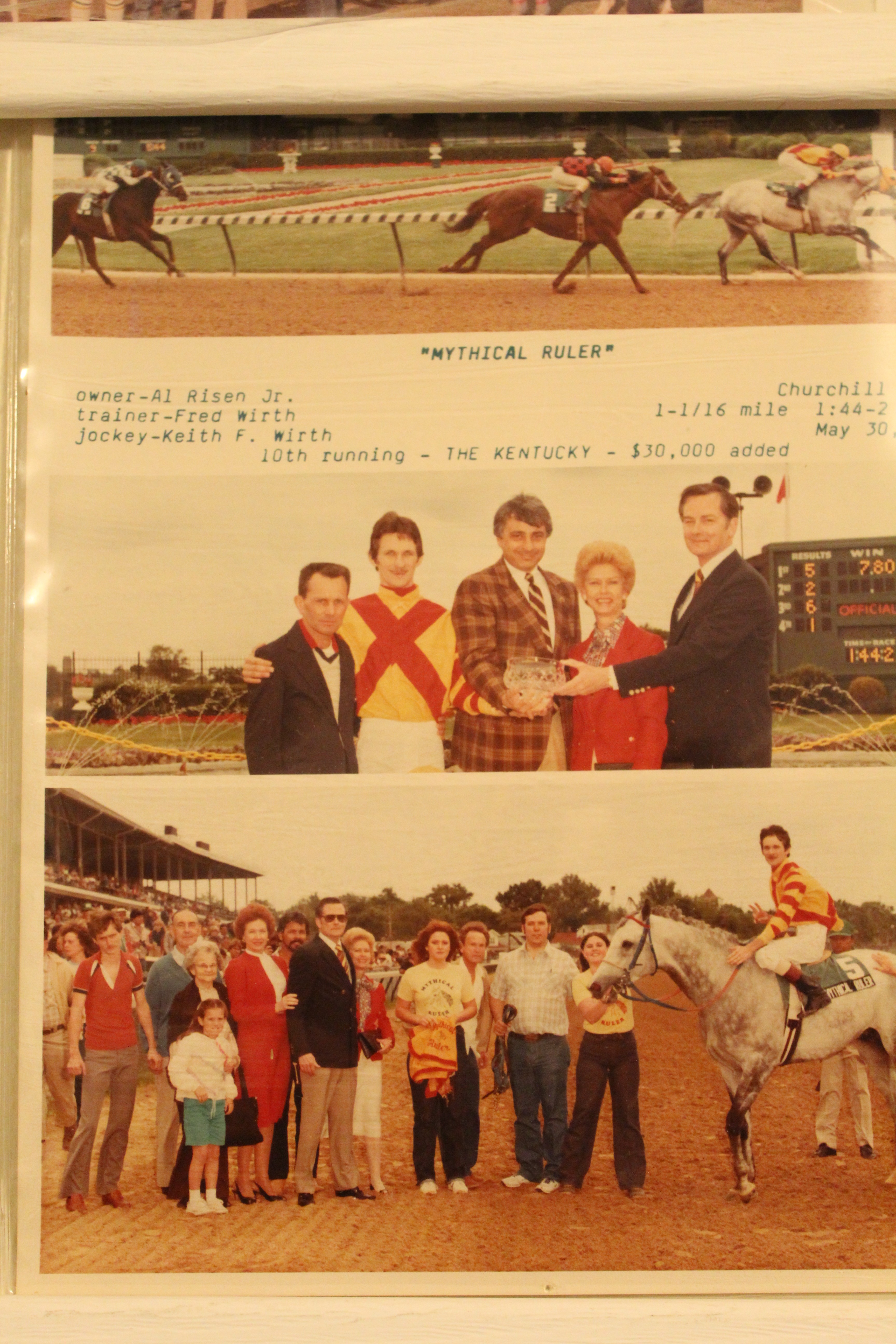 Photos from the 1981 Kentucky Derby.

As for boxing, Fred’s 5-foot height and 100-pound weight may not have seemed that threatening, yet his punch had some pop. It took him to becoming Florida’s Golden Glove Flyweight champion in 1955 which stands as his top boxing accomplishment. 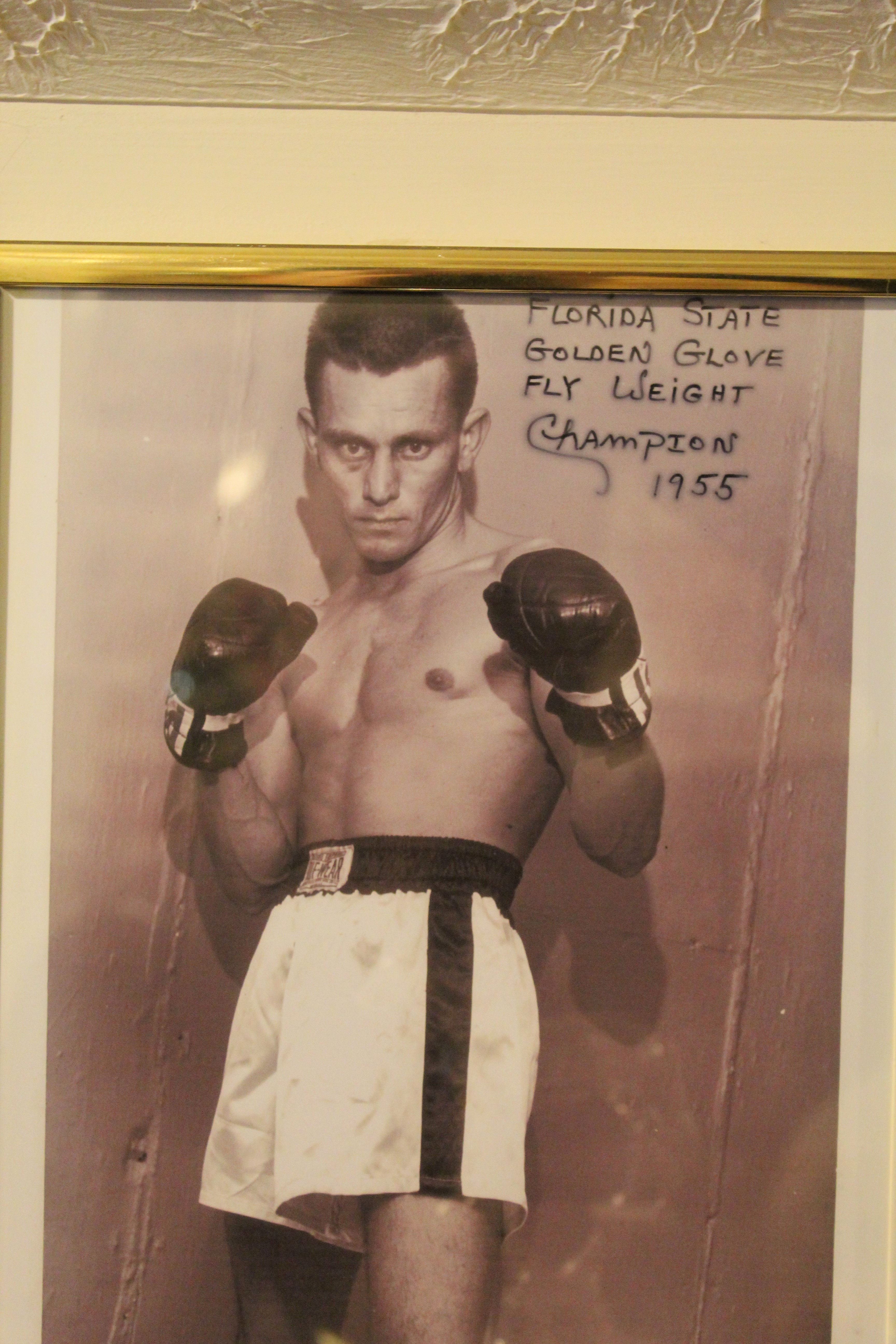 Of course, there’s more though. Not content with throwing punches or racing horses, Fred desired to feel more speed. So, he raced stock cars for a stretch of time in the 1950s. For good measure, rather than racing with literal or figurative horsepower, he tried his hand at roller-blading. As with most things Fred has done in life, he was quite good. So good to the point that he became the first Kentuckian to ever win the sport’s gold medal within the U.S, which was done in Michigan in 1963. The caption on the left of the below photo indicates he won races in Michigan, Ohio, Kentucky, and Florida. 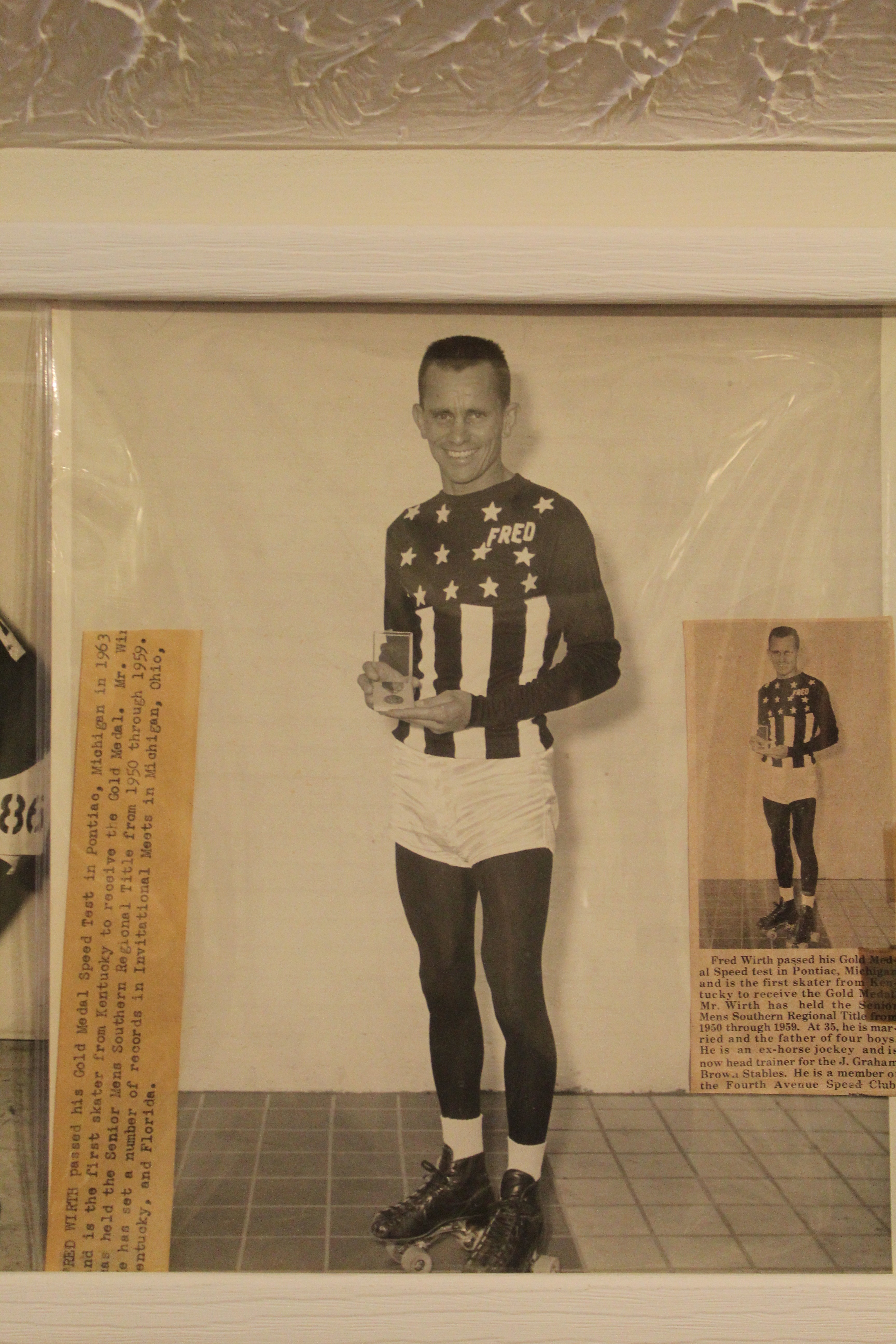 Fred in the prime of his days as a champion roller-skater.

As for golf, Fred took up the sport nearly 50 years ago. His game may not have ever taken him to the PGA Tour Champions, which given his successes in other sports, almost seems surprising. But Wirth has recorded 4 holes-in one, the most recent of which came when he was 85 years old in Myrtle Beach. Wirth has traveled the country to play in handicap tournaments, including the World Amateur Championship. 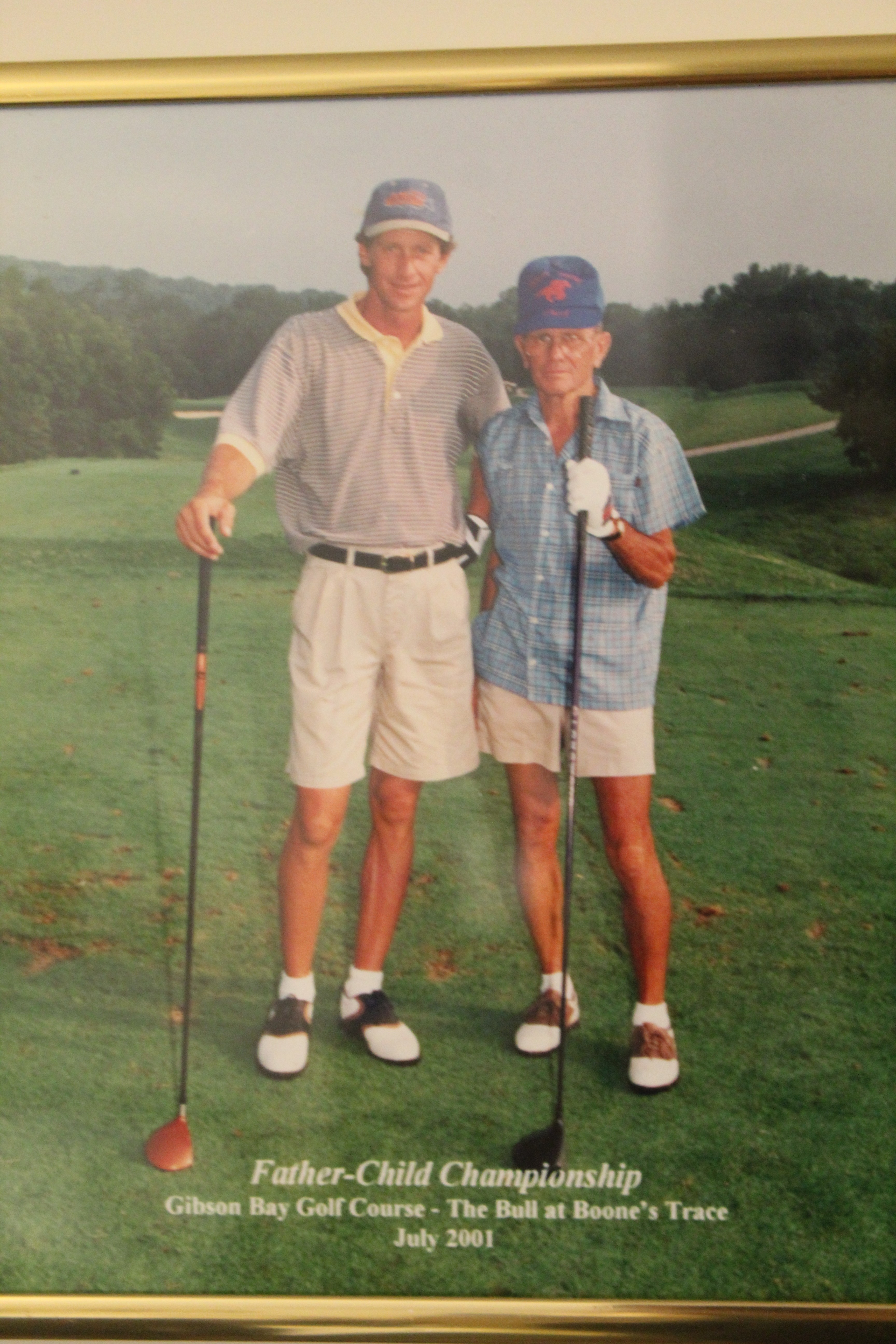 Fred and his son Kevin (referenced in the Sports Illustrated article above) playing in Richmond in 2001.

Fred plays most of his golf at Pennsylvania Run Golf Course, a short drive from his house on the south-end of Louisville. One of his most constant companions to Penn Run or any golf course was his beloved dog Maggie. While it’s a sentiment any dog owner has, Fred is adamant Maggie is the best dog that has ever graced the earth. She was Fred’s traveling companion, going everywhere with him no matter what the activity was. Maggie lived a great life, 17 years in total, all of which by Fred’s side. She passed away a few years ago and Fred misses her to this day. One could assume many folks miss her, including the golf car fleet at Penn Run. 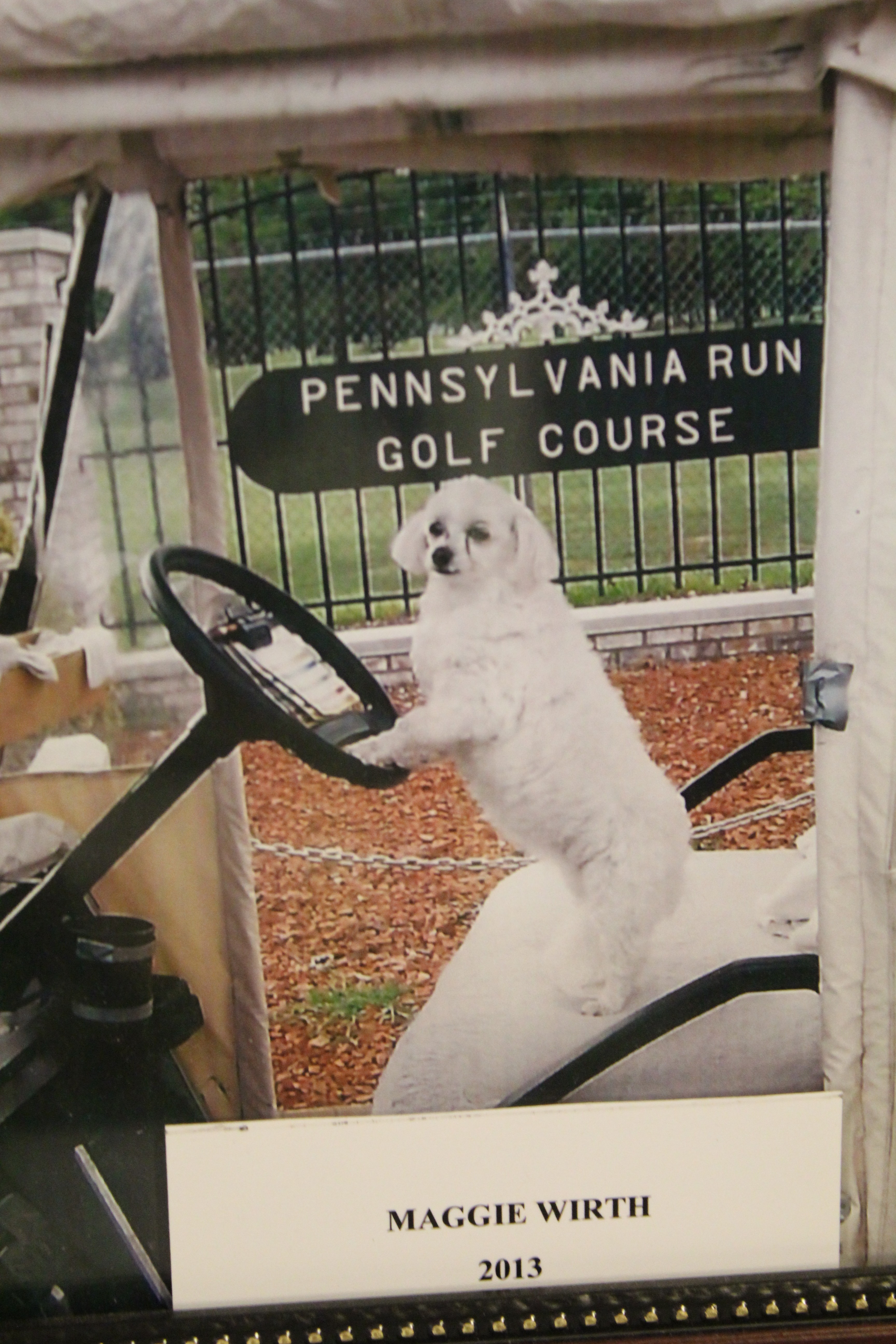 It may seem like Fred has lived a life full of sunshine and rainbows, but his upbringing was not easy by any means. Fred grew up in Kentucky but raised in foster care. He bounced from home to home as a child, spending those youngest days living through the entire length of the Great Depression. His brother was shot in the back of the head which killed him at the age of 15.

While he never ended up being stationed, Fred enlisted in military service during the Korean War. A couple of years away from the world of sports didn’t leave any impact on his ability to rack up athletic achievements, but serviceman is another one of the adjectives we can add to Fred’s name. 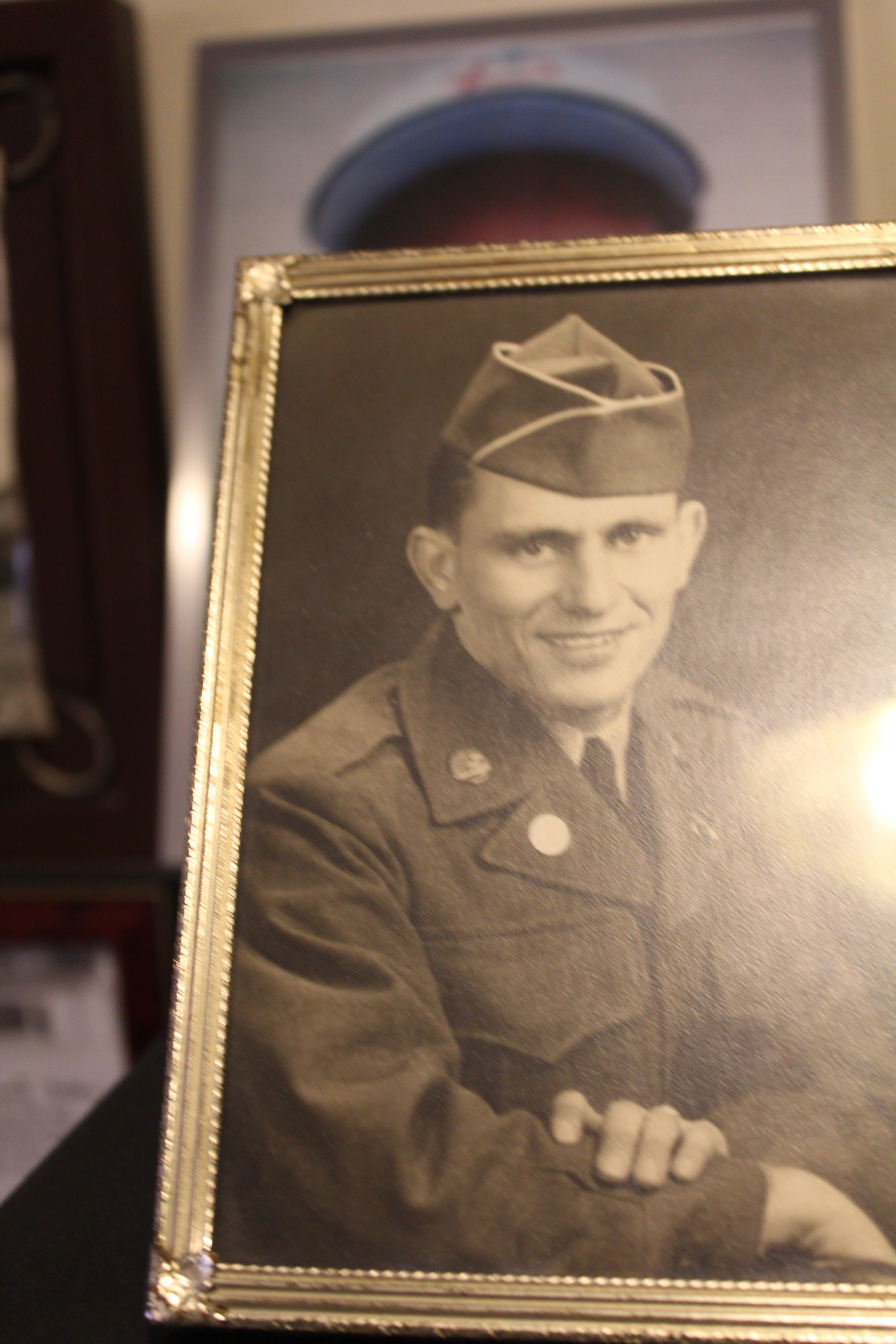 Fred is far from perfect no matter how many trophies or achievements he has in his name. And he’ll be the first one to tell you that. When asked how he wants to be remembered and what he wants his legacy to be, Fred got emotional and started shedding tears thinking back on his 90+ years.

“I would like to be remembered as a good person, which I try to be. And try to remember that people can improve themselves like I did. I didn’t have anything when I was little, nobody wanted me around. I look back on my days… I don’t see how I made it. I hope people look at me and what I’ve accomplished and think that if someone who grew up in poverty can do all that, they can too.”

Fred in his current state is someone many people want to be when they turn 93. To go play tournament golf nearing 100 years old while being able to move swiftly and operate lucidly is a phenomenal achievement, maybe even more impressive than the shelves of prizes he has collected upstairs in his home. While he can be a role model for that target, Fred is a walking reminder that life is all about the work you put into it. Regardless of how old you are, where you come from, what you have or don’t have, if you put your mind to it, you can accomplish whatever you want. Fred has. We can all do something similar. 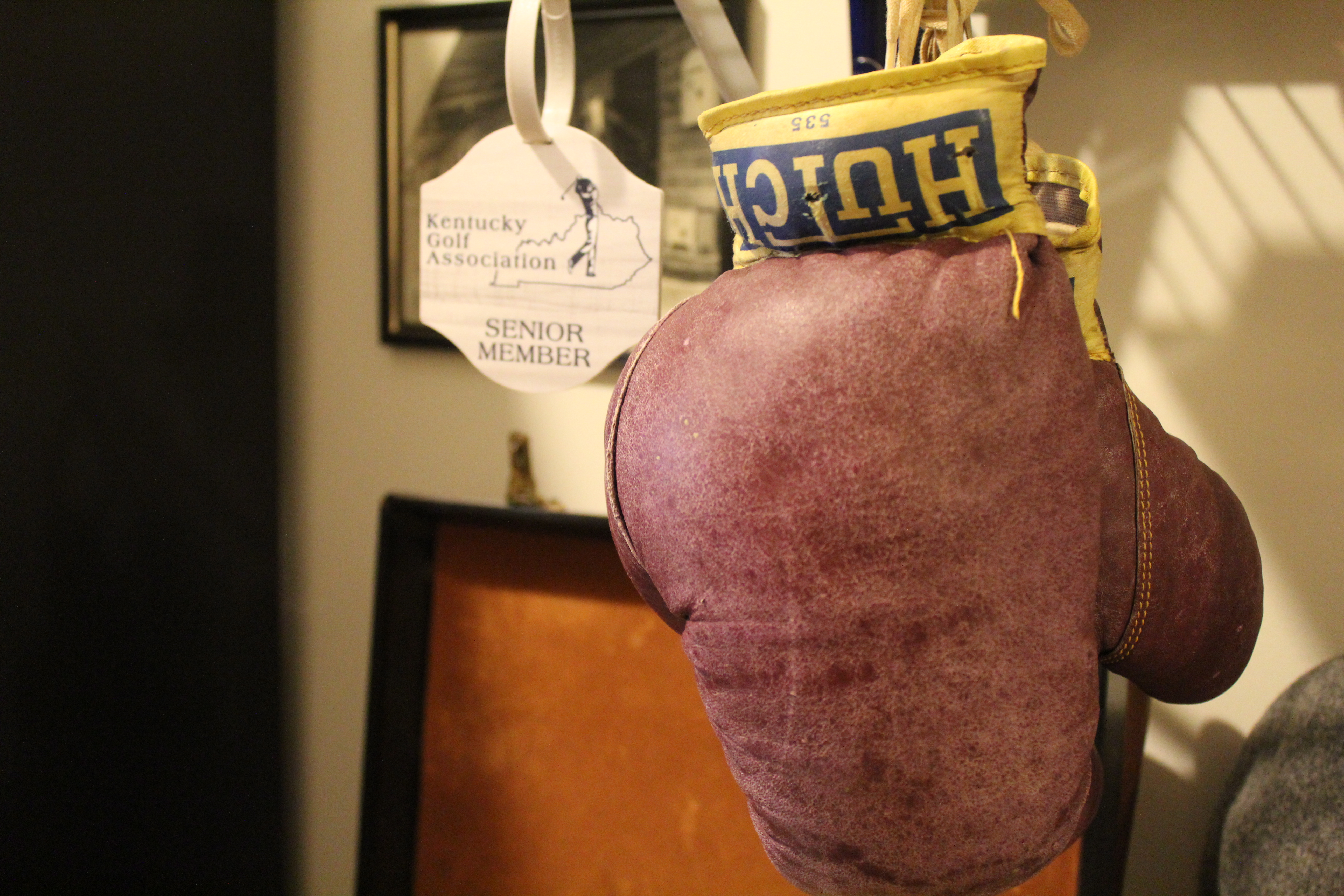