FLORENCE, IN (April 5, 2021) – The state of Indiana and Belterra Golf Club brought forth a terrific beginning to the Kentucky PGA’s 2021 tournament season, and Golf House Kentucky’s season altogether. The Kaiser Cup, a Ryder Cup-style tournament between ten of the Section’s ten best Member Professionals and ten of the top Assistant Professionals or Associates, began on Monday with five four-ball matches and five foursomes matches, all conducted as 9-hole matches.

Each match reached at least the 8th hole in five competitive matches to open the tournament. Two matches finished as ties with Blake Watts/Myles Mahan and Nick Johnston/Jesse Massie splitting their point up for grabs, as did David Huffman/Aaron McDowell and Steven Conley/Matt Bloom. Austin Burke/Jacob Schakat entered the 9th hole 1 UP over Tom Walters/Dan Utley, but a bogey from the Assistant team to the Member team’s par tilted the match in favor of Walters/Utley, giving their group the early edge after the first session. 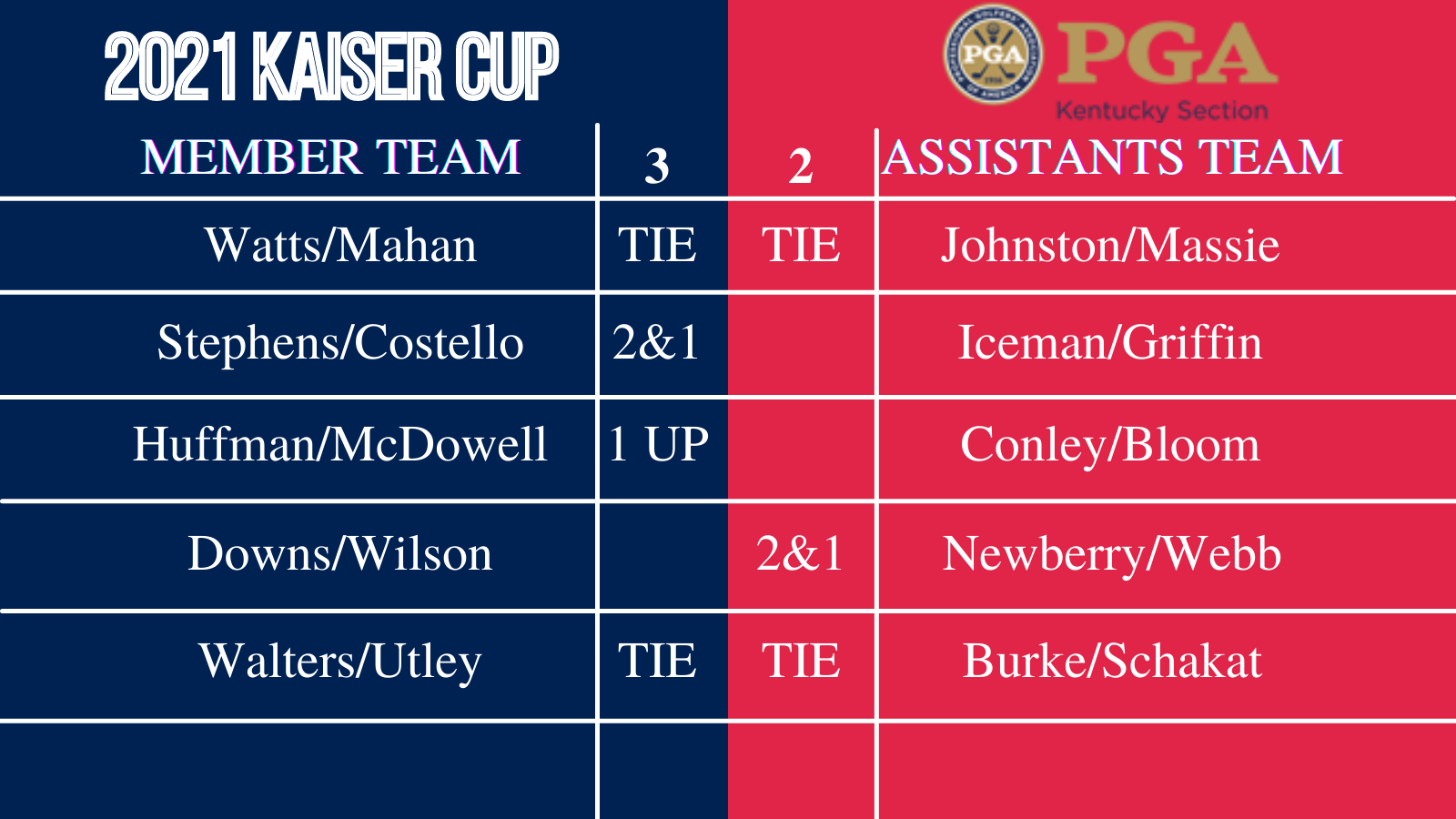 A well-rounded performance from the Member team won them this session as well, pushing them to an overall advantage of 6.5-3.5 after the opening day. Two par putts on the final hole were particularly key in this being the case, as Andrew Stephens sunk a five-foot putt to preserve a 1 UP win for him and Robert Costello over Daniel Iceman III/Josh Griffin. A short time later, David Huffman made a putt from eight feet away which led to a split point for him and Aaron McDowell against Steven Conley/Matt Bloom. Without those two putts, the session would have gone down as a 2.5-2.5 draw. Now, the Member team finds themselves in the driver’s seat entering the final day.

All matches on Tuesday will be contested as singles matches with those matchups to be determined later this evening during a tournament dinner. The Member team is looking for their second consecutive win in the competition, having won the contest in 2019. The 2020 competition was canceled due to the COVID-19 pandemic.

As a reminder to KPGA Members and Associates, the Pro-Pro Shamble supported by HMG Accessory Solutions closes for registration tonight at 11:59 p.m. EDT. Click here to register.