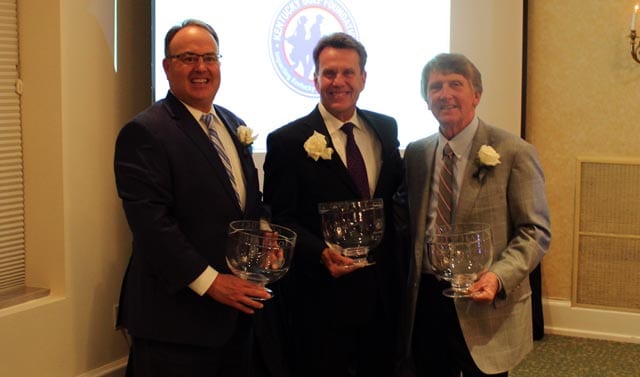 On Thursday, November 1st, the 2018 class of Jim Brown of Paducah, Rob McNamara of Frankfort and Louis Miller of Louisville were inducted into the Kentucky Golf Hall of Fame at Big Spring Country Club. All three inductees were recognized for their outstanding achievements both on and off the golf course. They join a distinguished list of Kentucky Golf Hall of Fame members, which includes individuals with remarkable records as players, golf professionals, golf course superintendents, educators, and golf administrators.

Special thanks to Big Spring Country Club for hosting the 2018 Kentucky Golf Hall of Fame Induction Ceremony and congratulations to all of the inductees and award recipients.

About the Kentucky Golf Hall of Fame Award Recipients:

Jim has had an accomplished amateur golf career, with his playing achievements placing him among one of the best amateur golfers in the state of Kentucky.  Jim attended Southern Illinois University, Carbondale, where he made All Conference in 1976 and 1977, and participated in the NCAA Championship in 1977.  His success continued after college; Most notably, Jim won the Kentucky State Amateur Championship three times in years 1977, 1981, and 1982.  He also was the US Amateur Qualifier Champion four times.  Additionally, Jim was the Irvin Cobb Champion nine times from 1974 to 1995.  The Irvin Cobb Championship has one of the strongest field of players in Kentucky, drawing golfers from all over the Mid West and South to play in the prestigious tournament.  Among other accomplishment, Jim won the Murray Country Club Invitational seven times, the West KY amateur Champion six times, and the Country Club of Paducah Men’s Club twenty-three times.  Jim also served as President of the Kentucky Golf Association, and the KGA-PGA, and is currently serving as Director Emeritus on the KGA.  Jim lives in Paducah with his wife, Brenda.  Jim has one son, Jamey, and one daughter, Amanda.  He is also the proud grandpa to four grandchildren.

Rob, born and raised in Kentucky, has been a dominant force in his junior, amateur and professional golf careers.  As a junior, Rob won the Kentucky Junior Am in 1981 and won the Kentucky State High School Championship in 1983.  Also, in 1983, Rob qualified for the U.S. Open at the age of 16; at that time the second youngest player ever in the U.S. Open field behind Jack Nicklaus.  As a collegian for LSU, Rob was a 3 time All American, 4 time All SEC Conference including SEC Freshman of the year and SEC Player of the Year.  Rob won 4 collegiate tournaments and had over 15 top 10 finishes in tournaments throughout his collegiate career including 2 team SEC Championships.  After graduating from college, Rob turned professional in 1988.  In 1989 he won his 2nd Kentucky Open Championship, just 3 years after winning as an amateur in 1986.  Rob would go on to qualify for a 2nd U.S. Open in 1990 as a professional.  He was a member of the Canadian PGA Tour and the Australian PGA Tour from 1988-1990 where he won the Barquisimeto Open and the Air New Zealand Open, setting a course record of 61.  In 1992 Rob decided to give up his playing career and went on to work with the Florida Gators, then on to Hawaii, then to Farmington Country Club where he has been the Head Professional the last 22 years.  Rob is married to Carrie and has a daughter Madeline, and a son, Sam.

Armed with a love of golf and a thirst for knowledge, Louis received his Agronomy degree from Penn State University, and then returned to Kentucky prepared to transform the practice in the state.  He was incredibly innovative for his time and had solutions to every feasible issue that could possibly arise and he actively chased opportunities to share his deep education and knowledge.  Louis made significant, remarkable changes in the golf maintenance industry state and nationwide.  Louis has done the same for the golf course construction industry, where he has leverage his unique skills to build and renovate more than 150 golf courses, including world-renowned facilities like Valhalla Golf Club.  Louis has not only grown the industry, but invested his time in developing future generations of golf course innovators, builders, and superintendents.  Louis is well known on a national level, being named one of the top 100 superintendents of the 20th century.  During his career, Louis also worked on renovations for the 2008 Ryder Cup with Jack Nicklaus, 2004 Champions Tour, and the 2000 and 1996 PGA.  Louis built the inaugural First Tee course at Shawnee Golf Course in 1999 dedicated by Tiger Woods.  Among other accolades, in 1993, Louis reached the level of a “Certified Builder” as sanctioned by the Golf Course Builders Association of America.  There are only 26 Golf Course Builders to have been honored with this title.  Louis lives in Louisville with his wife Lesa.

“Marsha has spent a life time of giving to golf in KY in all facets of the game, whether it be through playing at a high level or serving on many boards to promote and to nurture the game. She has a wonderful competitive record. She has won many club championships, Lexington City and Central KY tournaments including the Marion Miley Invitational. But just as important she has served on many boards and committees. She has been President of the Lexington City Tournament and Clover Leaf. In Central Kentucky she has served every executive board position including long-running terms as Secretary-Treasurer. In the WKSGA she has also served in all of the Executive Committee positions including as the Director and President.”