Class of 2016 Inducted to Hall of Fame 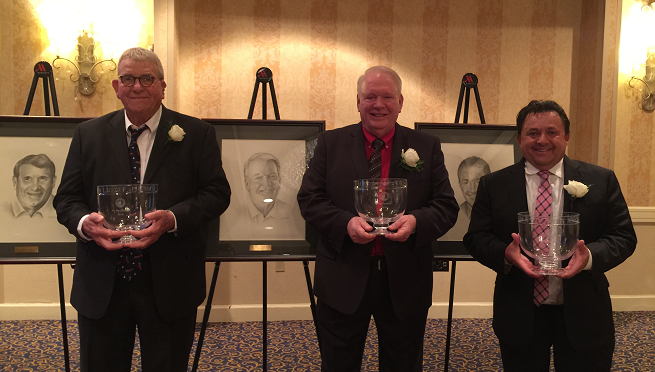 On a day perfect for playing golf, three of Kentucky's finest were inducted into the Kentucky Golf Hall of Fame.  The Induction Ceremony was held on Friday, November 18 at Marriott's Griffin Gate Resort in Lexington on a beautiful day with temperatures in the mid-70s.

Dr. Rex Chaney, the long-time Morehead State Golf Coach, Kentucky Golf Association Leader Tom Cooksey and former Valhalla Superintendent Mark Wilson were honored as the Class of 2016 - joining many other greats of Kentucky Golf who are known for playing ability, service to the game and more. The evening was made special by those who attended and reminisced about good times and fond memories that only the sport of golf can create to bond people together for life.  Wayne Martin kicked off the inductions by introducing his longtime friend and former coach, Dr. Rex Chaney. He concluded his speech by playing Kenny Chesney's song "Coach" dedicated to Chaney by his players in a fitting tribute.  Chaney introduced the family that attended the evening to celebrate his accomplishment. He acknowledged two who were also absent in his son Lee, who is caddying for his standout former player, Josh Teater in a Professional event.

Next to take the stage was Kentucky Golf Association Board Member, Jim Wells and Ben and Dan Cooksey.  The three told funny tales of the thorough and serious man who is still making a constant effort to grow the game of golf in Kentucky, especially in the eastern part of the state - Tom Cooksey.  Their speeches were emotional, powerful and sprinkled with good-humoured digs at "Mr. 69." Cooksey acknowledged that he certainly wasn't able to accomplish his many accolades on his own, crediting his wife, children and peers for their help along the way.  To round out the ceremony, Dr. Dwight Barkley took the crowd through the career highlights of his favorite student at Eastern Kentucky University, Mark Wilson.  Wilson was humbled by the crowds of "teams" from his various moves along his career that joined him in celebrating the evening. He always considers his teams as part of his family.  Those in attendance were brought to their feet by each Inductee - it was their speeches and those of the presenters that made the night truly something to remember.