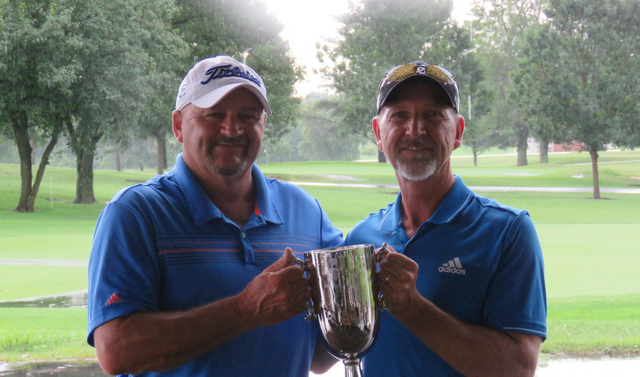 Elizabethtown, KY – With full expectations a champion would be recognized today, Mother Nature had alternative plans.  After heavy rains and several delays the Kentucky Senior Open was shortened to 18 holes and the first round leaders declared co-championships.

First round leaders Stanley Ramsey and Randy Jewell teed off under threatening skies and after six holes play was suspended due to heavy rain and lighting.  After getting a small break in the weather, players returned to the course, but the resumption of play was short lived and the final round was canceled and the championship shortened to 18 holes.  “The goal today was to get the players to complete at least nine holes so we could have a 27-hole championship” stated Bill Coomer, Director of Competitions.  “Mother nature had alternative plans so we just had to deal with an interesting situation.”

Since play could not resume for the day, even a playoff to break the first round tie could not occur, thus Ramsey and Jewell were declared co-championships.  As Jewell is a professional and Ramsey an amateur, Jewell won the professional purse.  “Truly a unique situation”, stated Kentucky PGA Executive Director Steve McMillen.  “In my 27 years of golf administration I don’t recall a situation like this.  We are happy for both Stanley and Randy and pleased to have them as our 2017 Kentucky Senior Open Champions.” The 60 Plus Division was a bit luckier, as the field was able to complete 27 holes.  First round leader Taylor Kindervater of Elizabethtown continued his good play and earned the championship with a five shot victory over fellow amateur Elmo Greer of London