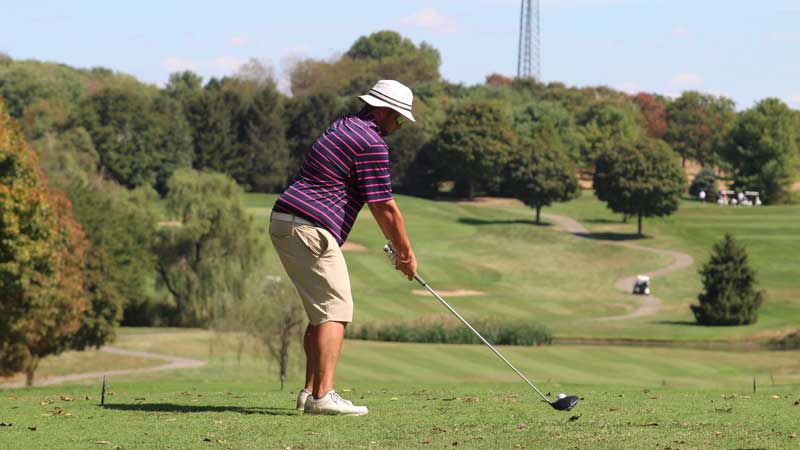 As the Clark’s Pump-N-Shop Kentucky Mid-Amateur turns a quarter-century old, it welcomes a new champion to its list of winners. Matt Epperson of Lexington won in his hometown on Tuesday at University Club of Kentucky (Big Blue Course) with a four-stroke victory. Beginning the day with a lead of one stroke over defending champion Andy Roberts of Owensboro, Epperson fired a round of 66 (-6) to back up yesterday’s 67 (-5) and cruise to victory thanks to his total score of 133 (-11).

Epperson and Roberts both went out in 32 (-4) to give themselves a minor cushion over their competitors as the back nine began. Roberts ran into trouble on the par-four 10th, however, making a double bogey and thus providing Epperson with breathing room. Roberts came back to birdie the 12th and 13th holes, but bogeys on the 14th and 15th took him too far behind Epperson, who played the inward nine bogey-free with birdies on the 12th and 16th holes.

“It is a big win,” Epperson said after the championship. “We have a lot of good mid-amateurs in Kentucky; Andy and Nick Johnston (who finished in third place behind Epperson and Roberts) have had great years, and after finishing second to Andy in this event last year, it definitely feels good to bring it home. This is maybe the biggest win of my career.”

Three other golfers took home titles during the final round. Rob Petrey of Florence won the Senior Division for players aged 50-59 off the strength of two rounds of 70 (-2) for a 140 (-4) total that secured him a seven-stroke margin of victory. Mount Sterling’s Gary Backlund dominated the Masters Division (60-69) with a nine-stroke win following rounds of 71 (-1) and 69 (-3) for a total score of 140 (-4). Elmo Greer of London took home the last gross title in the Legends Division by virtue of a four-stroke win with a 36-hole score of 150 (+6).

The Kentucky Golf Association would like to thank the University Club of Kentucky, this year’s field and Clark’s Pump-N-Shop for making the 25th Kentucky Mid-Amateur one of the best yet. The KGA looks forward to seeing many of this week’s players next week at Lexington Country Club for the KGA Invitational on Monday, September 30. Congratulations to Matt on his victory!

Matt Epperson Holds Lead After First Round of KY Mid-Am